Bull Moose store fires all workers after dispute over mask policy, according to former employees

The Bull Moose store in Salem, NH is temporarily closed after employees say the entire staff was terminated, related to a dispute over lifting its mask policy. 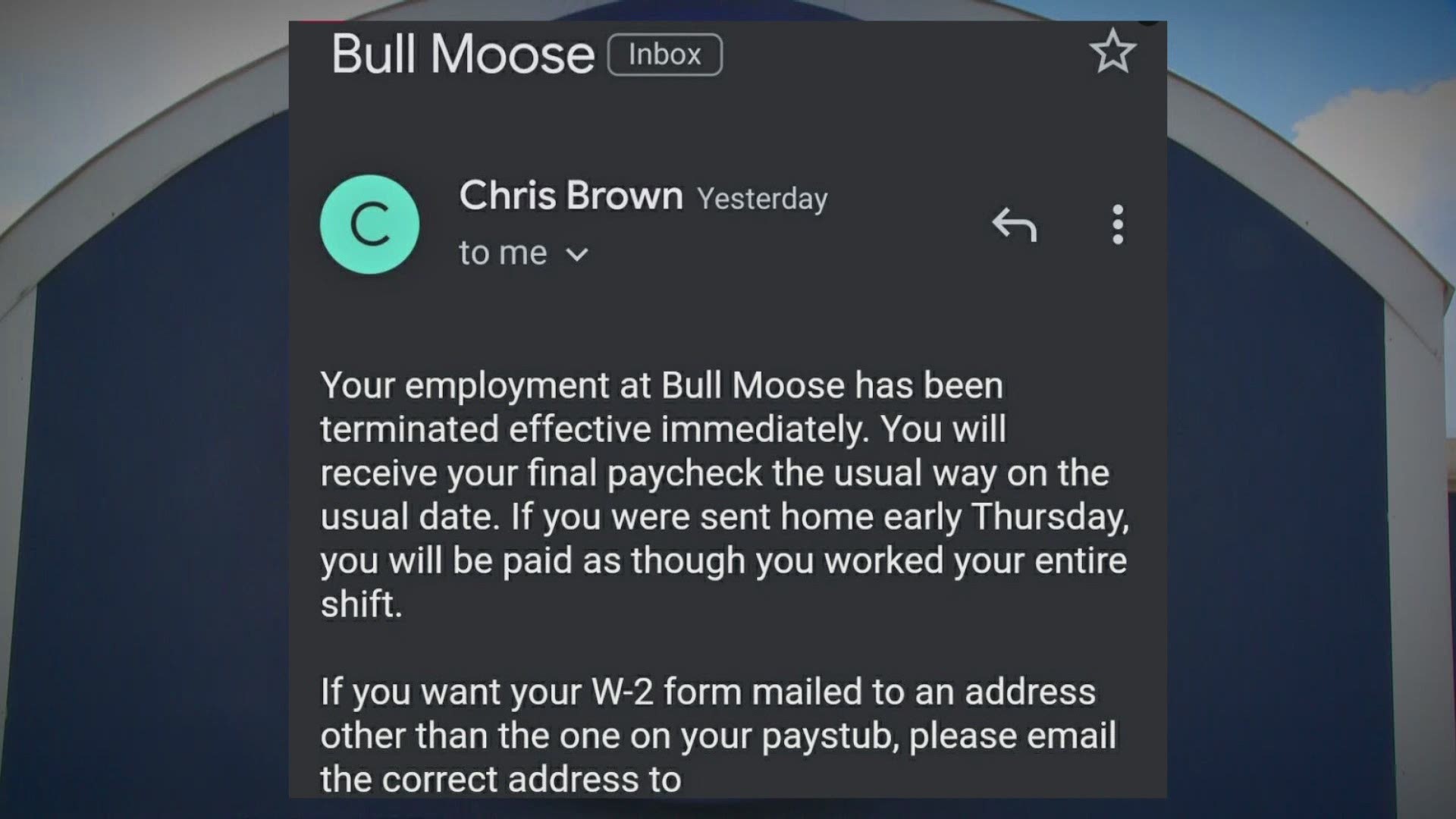 Bull Moose is a retail chain in Maine and New Hampshire that sells music, movies, and video games in a variety of formats, as well as books and gifts.

On Saturday, former employee Andrew Bove posted on Twitter: "Bull Moose has fired the entire staff of the Salem location because we disagreed with their decision to end the store's mask mandate in spite of their being a continuing pandemic. People whose lives depend on this job have been abandoned."

In addition to speaking with Bove, NEWS CENTER Maine connected with several other former store employees who corroborated that the entire team (20 employees) had been fired and also say they believe it's related to a dispute over the store's plan to lift its mask requirement beginning Monday, May 24.

Employees also shared the email they received from Bull Moose CFO Chris Brown, notifying them of their termination, which was "effective immediately."

Bove calls any conversation between management and employees over the decision to lift its mask requirement "highly performative," saying despite multiple employees expressing a strong interest in maintaining the policy, management ultimately went ahead with a plan to lift it.

Bove tells NEWS CENTER Maine, when managers broached the subject of lifting the policy, "responses ranged from 'that is unsafe' to simply, 'I will quit on the spot' and then the next day they said, this will go into place on Monday [May 24]."

Bove says after the announcement was made, employees pushed back. "At that point, a lot of us were sending angry emails in the work email chain to the whole store."

On Thursday, multiple former employees say the store was suddenly closed early. The store remained closed on Friday. On Friday afternoon, they say they all received the emails notifying them of their terminations.

Bove says many employees feel blindsided and betrayed, writing in a tweet, "As angry as I am I have to say this is is all really just heartbreaking. Bull Moose has been a really special place for a lot of people, myself included. There were good, welcoming people there. For some this amounts to a personal betrayal of trust."

As the mask mandate lifts in Maine on Monday, May 24, Bove hopes employers will look to the comfort level of employees as they determine ongoing mask policy.

"They need to keep their employees safe," says Bove, "and they need to listen to employees and not just say, 'we hear you,' they need to act with urgency towards actually meeting the needs of the people for whom their profits rest."

@BullMoose has fired the entire staff of the Salem location because we disagreed with their decision to end the store's mask mandate in spite of their being a continuing pandemic. People whose lives depend on this job have been abandoned.

On Saturday, Bull Moose released a statement about the Salem store's temporary closure on its social media pages:

"We are sad to announce that we have temporarily closed our Salem store. We are not able to share the reasons behind our decisions regarding the Salem store as it is important to us to protect the confidentiality of our former employees. We can, however, say we are confident this decision was in the best interest of our customers, employees and business as a whole. We can also say emphatically this decision had absolutely nothing to do with masks or face coverings for employees or customers. The decision in itself is heartbreaking, but we stand by it as the correct course of action to move the business forward for the community. We apologize to the greater Salem community for closing temporarily and will reopen this store as soon as we can, with as many as people as we can. We sincerely hope that you remain our customers."

Speaking to NEWS CENTER Maine on the phone Saturday afternoon, Bull Moose CFO Chris Brown says he cannot comment on any terminations. He emphasizes that no one was fired because of anything related to masks.

Brown says the Salem store will be closed for the next several days, or potentially weeks.

Brown says the mask policies of Bull Moose's other stores are in flux right now and may vary from store to store, depending on feedback from store employees.

RELATED: Yes, businesses can require unvaccinated customers to wear masks even if there are no mandates