It's a David and Goliath story, with each blaming the other for manipulating the stock market, as Congress and the Justice Department investigate. 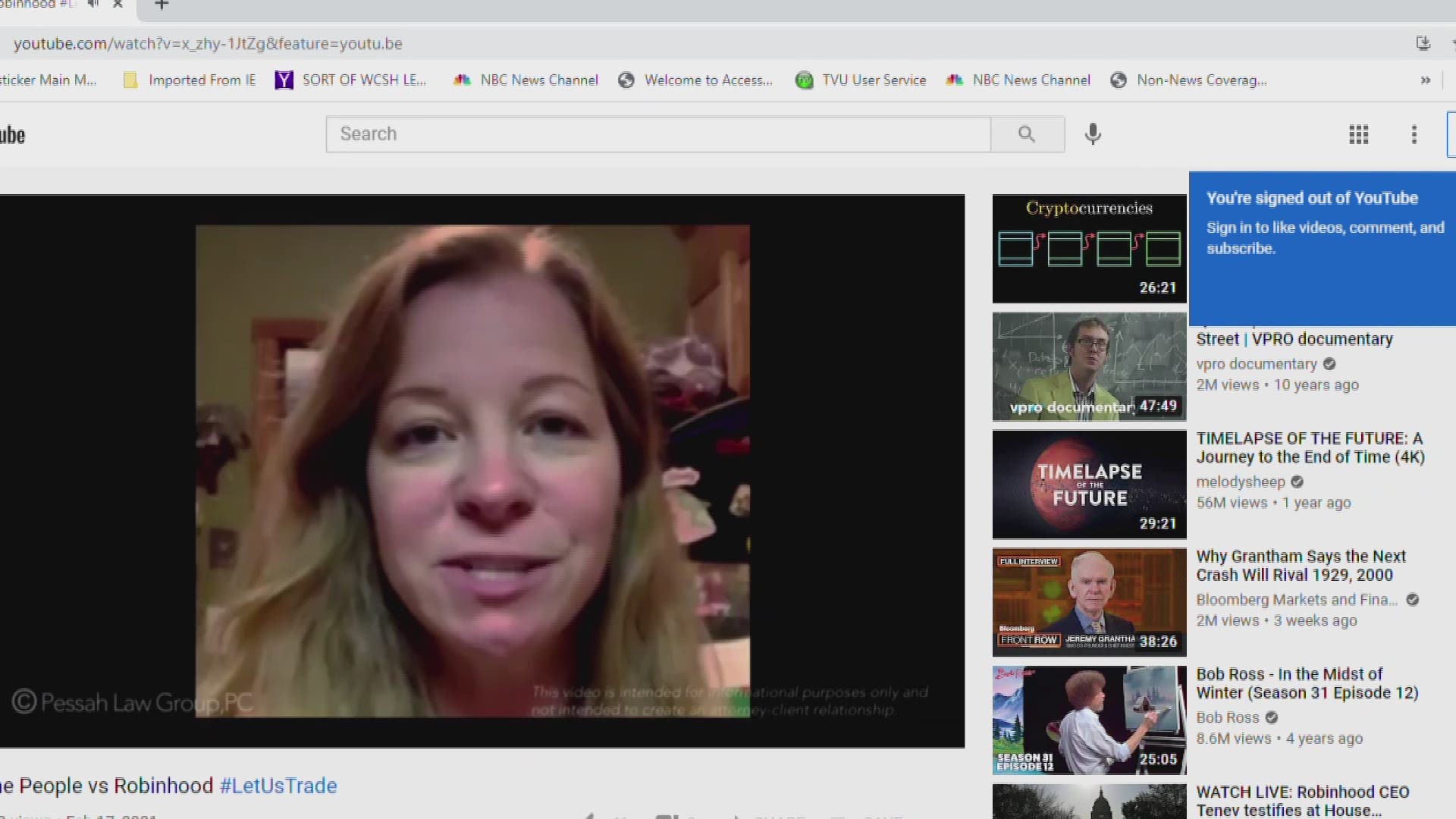 MAINE, USA — In Washington Thursday, the House Committee on Financial Services heard testimony on what happens when short-sellers, social media, and retail investors collide—as they did on January 28.

That is the day trading platforms, such as Robinhood, stopped retail investors from being able to buy shares of GameStop, AMC, and other volatile companies that some big investment firms were betting would fail, using a move called "shorting" the stock.

There are Mainers on both sides of this dust-up.

One, a CEO of a capital investment firm that shorted those stocks, was on the hot seat in Washington Thursday.

The other, a small business owner and retail trader who estimates she lost thousands of dollars when trading was halted, was at home watching closely.

The Pessah Law group out of California has filed a class-action lawsuit against the trading app Robinhood. It represents retail traders who say they suffered big losses because of Robinhood’s decision to block them from buying stock in companies like GameStop. Those stocks had been going down until retail investors rallied together to bring the prices back up.

Among those retail traders is Danielle Perreault of Saco. As a small business owner, stock trading is more of a hobby for her. But she says she trusted in Robinhood’s motto: “Let the people trade.”

"...and I think they’ve gone from being Robin Hood to the Sheriff of Nottingham,” Perreault said.

Despite the unprecedented market conditions in January, at the end of the day, what happened was not acceptable to us. To our customers, we apologize, and we’ve taken steps to make sure this won’t happen again.

Perreault, like the class action lawsuit she is now party to, claims Robinhood switched sides and turned against its own clients amid pressure from its clearinghouse to put up $3 billion as collateral to cover their trades.

Robinhood says it didn’t have that much money. Instead, the lawsuit claims, Robinhood struck a deal to put up less money and stop its clients from buying more of those stocks. Essentially ending the run-up on stocks that big hedge funds had been betting would go down.

The class-action suit states: “Acting against its defenseless clients, Robinhood wantonly brought the ability of millions of its clients to freely trade on its platform to a screeching and unceremonious halt.”

Perreault said, “They essentially cut off demand for this for the stock from the retail investors, of which I am, and eliminated the demand. There only being supply, the price plummeted and people lost millions if not billions of dollars."

“There are a lot of people who threw money they could not afford to lose into this…  rent money, mortgage money, taking out a loan, borrowing from their 401(k) to buy the stocks, seeing the trajectory. It’s heartbreaking for those folks," she said.

Perreault was not one of them.  She said she invested only what she could afford to lose and, in fact, the day prior, had sold enough of the stock to recoup her initial investment.

She expected the remaining stocks would continue to climb in value, but when Robinhood halted buying, the price dropped.

GameStop stock's head spinning climb began in January, going from about $39 to $348 at its peak. But the share price fell after brokerage firms restricted users from buying more shares.

On the other side of this equation is Gabriel Plotkin, the CEO of Melvin Capital Management LP. His was one of the companies shorting, or betting against those stocks.

“I want to make clear at the outset that Melvin Capital played absolutely no role in those trading platforms’ decisions. In fact, Melvin closed out all of its positions in GameStop days before platforms put those limitations in place," Plotkin said.

During his testimony, Plotkin talked about growing up in Portland in a middle-class family. He named his company after his grandfather who ran a convenience store in the city. Plotkin, who says he has learned a lot from this crisis, insists, “None of Melvin’s short positions are part of any effort to artificially depress or manipulate downward the price of a stock. We believed and still believe that its business model – selling new and used video games in physical stores – is being overtaken by digital downloads through the internet.”

#GAMESTOP HEARING:@RepSteveStivers asks Melvin Capital Management CIO Gabriel Plotkin about Elon Musk’s Gamestop tweet: “Do you believe that tweet was targeting you because you had shorted Tesla stock in the past?” https://t.co/0MMybZ1475 pic.twitter.com/AgC1MM1ARn

Congress is trying to figure out what went wrong here. Perreault hopes it will implement new restrictions on shorting stocks.

She said, “What I’m really hoping not to hear is that the regulations will somehow be placed on us retail investors for speaking about the stocks in a public forum and saying that we somehow manipulated the market.”

While the institutional investments firms say that’s exactly what they did, Perreault believes it is backroom deals among hedge funds, clearinghouses, and trading companies that are truly manipulating the markets and hurting small-time investors.

“When this happened in 2008, the banks were too big to fail at got bailed out but no one’s going to bail out us retail investors, because we are small enough to fail… and that’s a shame," she said.

“First, Robinhood securities put the restrictions in place in an effort to meet increased regulatory deposit requirements, not to help hedge funds. We don’t answer to hedge funds. We serve the millions of small investors who use our platform every day to invest,” Tenev said.

But Perreault believes that the way Robinhood makes its money throws its allegiance into question.

“If we put in limit orders, saying we want to sell or buy this at a certain price, they sell that to the hedge funds and others so they can glean what they can from it and that’s how Robinhood makes their money," she said. "So, I’m not sure that we are their customers, I think we are their commodity.”

The Justice Department’s criminal division has initiated a wide-ranging investigation into potential market manipulation in the January trading frenzy.