Owners of Harpswell lobster wharf say they are 'under attack' by variety of factors including cheap Canadian lobsters. 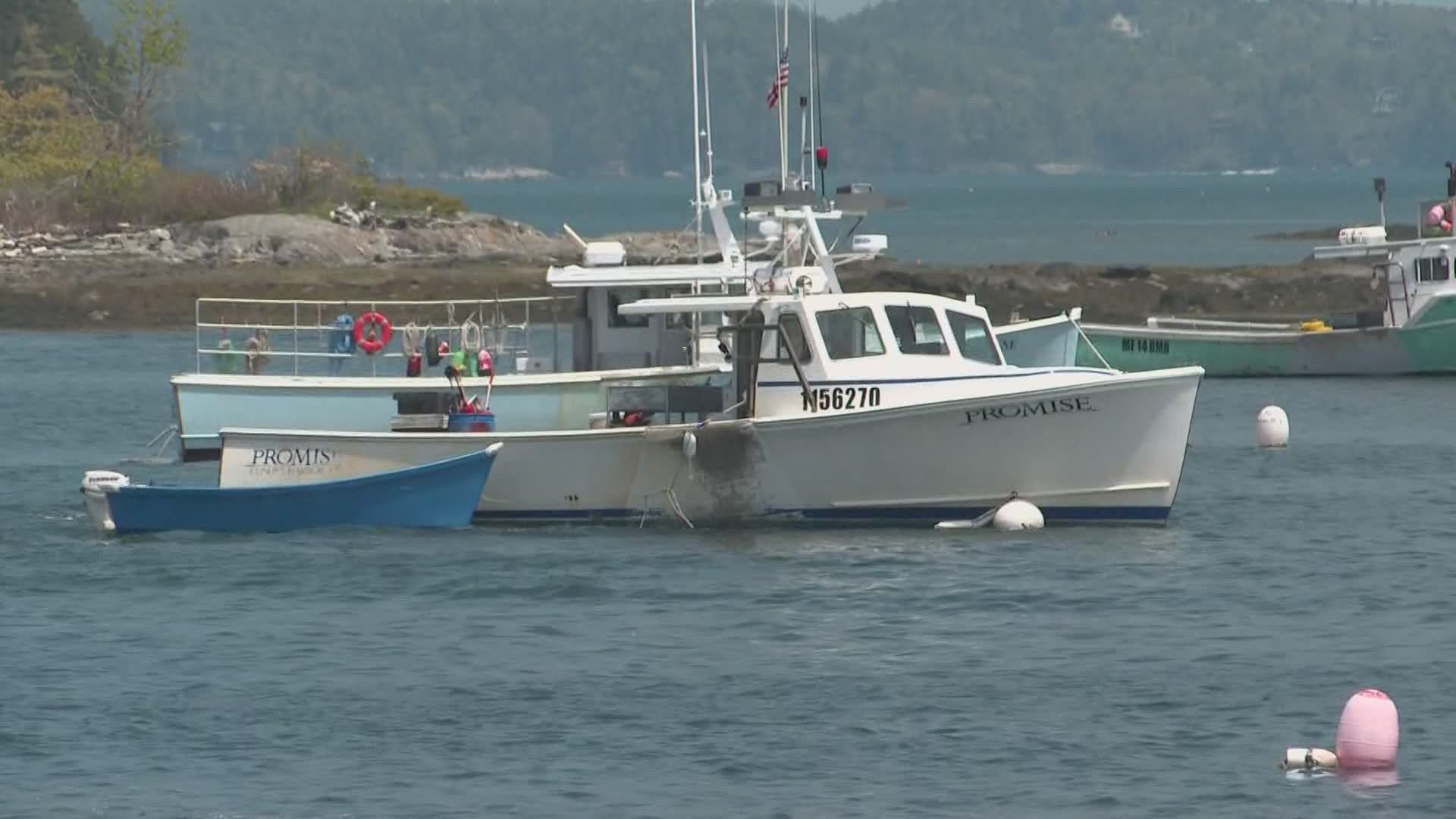 HARPSWELL, Maine — Gary and Alison Hawkes finalized their purchase of Hawkes' Lobster from Gary's parents on May 1.

His mother's aunt and uncle bought the business in the 1950s, and his grandparents bought it from them. Then his parents, Sue and Gary, took over and his father built the wharf in 1990.

Early Wednesday afternoon, Alison and "young" Gary stood on the eerily quiet dock as two of their teenagers walked by carrying fishing rods over their shoulders. They sped off in a dinghy to see what they could catch. Both also hold student lobstering licenses, Gary said.

Gary's great-grandfather fished in the area, and the couple bought the wharf from his parents hoping to pass it on to their kids, and the grandkids the already have.

Gary, 48, lobsters out of the harbor on the F/V Family Condition. His father, brother, a cousin, a nephew, and now, one grown son, also fish from there.

"He just got out of high school and bought that boat and he's trying to get his feet under him," Gary said.

But on Wednesday, the boats remained tied up under the late spring sun—all but Gary's father's boat. His dad headed out that morning to haul traps, knowing he might not earn back the cost of his gas and bait.

"He's stubborn," Gary said. "He knows he has to make money, but at his age, he just glad to be going and free, so he goes. He's been going for the last two months and he's hardly drawn much of a paycheck at all. He's trying to keep his crew going. He's like, 'Whatever, things will get better, we'll make it.' He's old school."

Years ago, fishermen could jump from one fishery to another—shrimp, groundfish, lobsters—but as the fisheries have been diminished, that option is no longer available.

Lobstermen, and fishermen in general, have battled a variety of factors that threatened to shut them down. Between increasing environmental regulations designed to protect right whales, the cost of gas and bait, and, this year, a pandemic that has brought tourism to a halt, it's a risky business all around.

But Gary said what makes him most anxious—and angry—this year isn't the COVID-19 virus that has shut down the country, it's the Canadian lobsters flooding the Maine market at a price so low that Maine lobstermen can't compete.

The Canadian government subsidizes the country's lobstermen, which lets them drop the price substantially.

He said Canadian lobsters can be delivered to the wholesaler he typically sells to for $3 a pound.

The retail price at Hawkes was $5.50 a pound Wednesday for hardshell lobsters and $6 a pound for larger "selects." However, the only people in the harbor that day were locals and construction workers.

"They just dump the product, essentially, because they don't have to make the in-between [seasons] because the government subsidizes them," Alison Hawkes said.

"I think one of the good things that's come from the pandemic is that people realize that they don't have to 'big-box shop' to get a lot of the products that they need," Alison said. "They're all here and are locally-owned. Your neighbor owns that shop ... There are wharves here you can buy from and you can get meat locally ... I think a lot of people are realizing they can go to the local farm stand and there's a basket there and you can put money in and get products."

Most years, the week of Memorial Day would find Holbrooks Wharf and Hawkes' Lobster, which share a parking lot, busy with tourists and locals alike celebrating the unofficial start of summer.

But Holbrooks Wharf announced last week that they would not open this year, reducing traffic to the area that Hawkes' has traditionally counted on.

"That's another game-changer for us, as new business owners thinking we're going to go into this doing this and now we're not doing it," she said. "We've had to change what we've done so many times since we've taken over ... it worries me a little bit, actually."

Meanwhile, federal and state regulations are requiring changes to fishing practices, including replacing the lines that tether buoys to traps with "breakaway" lines that will snap if a whale runs into it.

But lobstermen argue that most right whales die from ship strikes, not from becoming entangled in fishing line.

Gary and Sue "put a lot of years into this and it's really been about family and community, and we don't want to lose that either," Alison said.

"It's scary because there's what depends on us," Alison said, motioning to her kids. "Those little people over there depend on us to make this push through. And, too, when you're taking a legacy from someone and then you have to ... it's not the way it was gonna be and ... it makes you mad and scared."

Fishermen say much of this year's season remains unknown, from the price of bait and fuel to whether Maine will even have a tourist season—or open restaurants in the most populated areas of the state.

"They don't realize ... the whole state of Maine counts on the lobster industry," Gary said. "It employs thousands, thousands of people, and if they destroy us, they're going to destroy Maine."

His voice broke as he continued: "People who have money from away are going to own it all and it's going to be just a resort."

RELATED: Maine lobster catch down in 2019, but value stayed high