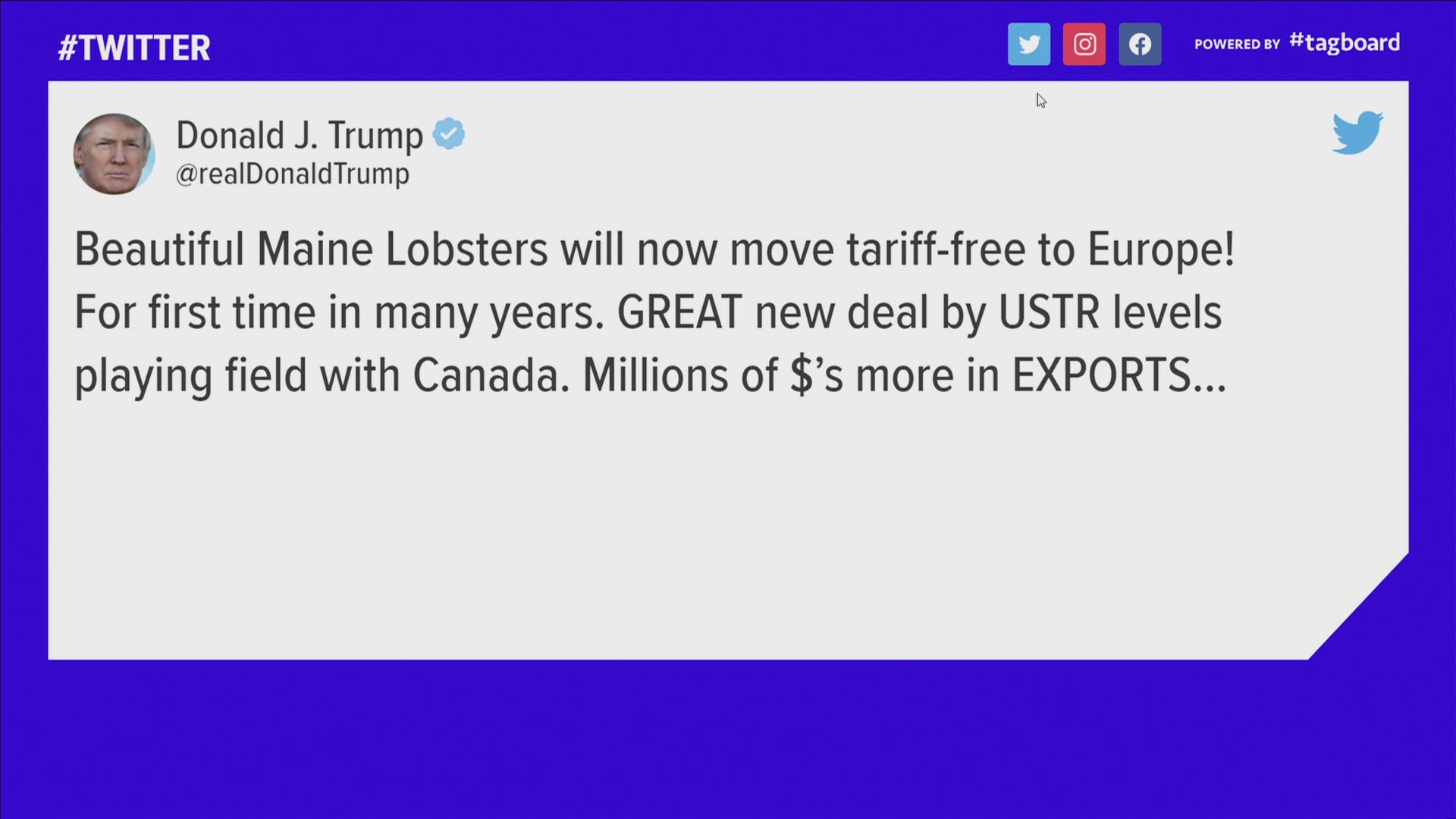 Under the agreement, the EU will eliminate tariffs on imports of U.S. live and frozen lobster products. U.S. exports of these products to the EU were over $111 million in 2017, according to Lighthizer.

...More JOBS from Eastport, Cutler, & Jonesport to Stonington, Friendship, and Casco Bay. I am proud to help the great people of Maine!

The EU will eliminate these lobster tariffs on a Most Favored Nation (MFN) basis, retroactive to begin August 1, 2020. The EU tariffs will be eliminated for a period of five years and the European Commission will promptly initiate procedures aimed at making the tariff changes permanent.

The United States will reduce by 50% its tariff rates on certain products exported by the EU worth an average annual trade value of $160 million, including certain prepared meals, certain crystal glassware, surface preparations, propellant powders, cigarette lighters, and lighter parts. The U.S. tariff reductions will also be made on an MFN basis and retroactive to begin August 1, 2020.

Great news for Maine’s hardworking lobstermen & women! The US & EU reached an agreement to eliminate the tariff on US lobster. This victory, which I advocated for, reopens this lucrative market to Maine lobster by putting it on a level playing field with Canadian lobster.

“As they face the challenges of harmful retaliatory Chinese tariffs, the pandemic’s economic costs, and misguided federal regulations, there is no question that today’s agreement provides a welcome bit of good news for Maine’s lobster industry. The removal of these tariffs will give Maine’s lobstermen, dealers, and processors a level playing field with their Canadian competitors, and restore a key market that brings millions of dollars of economic activity into our state. There’s much more work to be done to protect Maine’s lobster industry and the coastal communities that rely on it, but this is a solid development. All we want is a fair fight, without the political hurdles – because there’s no fishery in the world that can match the quality of our catch or the dedication of Maine people.”

This is not the first time this month that Trump has referenced his work for Maine's fishing industry as a reason why he should be reelected. On Monday, August 17, Trump said on Fox & Friends he thinks he should win Maine in the upcoming General Election.

“I should win the state of Maine,” Trump said.

Trump’s hopes for the outcome of Maine, which is largely considered a swing state, came up as Trump and the hosts discussed the oil and gas leasing program within Alaska's Arctic National Wildlife Refuge that was approved Monday by the Department of the Interior.

In June on Trump’s visit to Maine, Trump met with leaders of the New England fishing industry and announced he would rescind future protections of the Northeast Canyons and Seamounts Marine National Monument, freeing up areas for commercial fishing.

“In theory, I should go down as a great environmental president,” Trump said Monday on the show. “Obama shut down 5,000 square miles of fishing and lobster fishing in Maine…I opened it up for Maine.”

In a statement to NEWS CENTER Maine, Oceana, the largest international advocacy organization focused solely on ocean conservation, called Trump's proclamation "another nail in the coffin" for fisheries and healthy oceans in New England.

During the August 17 interview with Fox & Friends, Trump also mentioned the actions he’s taken to help lobster fishermen with financial assistance to make up for lost income from Chinese tariffs.

Trump cited the tariffs and opening up the once-protected waters for fishing as reasons why he thinks he should win the state in November.

“I mean what I did for them was…you know…I don’t know that I will. I think I know I'll win half of it. I'll win Maine too but I should win the state. I've done things that no other president would be capable of doing ya know…hate to brag but I have no choice.”