Mills offers cash incentive to get unemployed Mainers back to work; some part-time workers now eligible

Eligible workers who start jobs between June 15 and July 25 will receive $1,500. Some part-time workers are also eligible for a cash incentive. 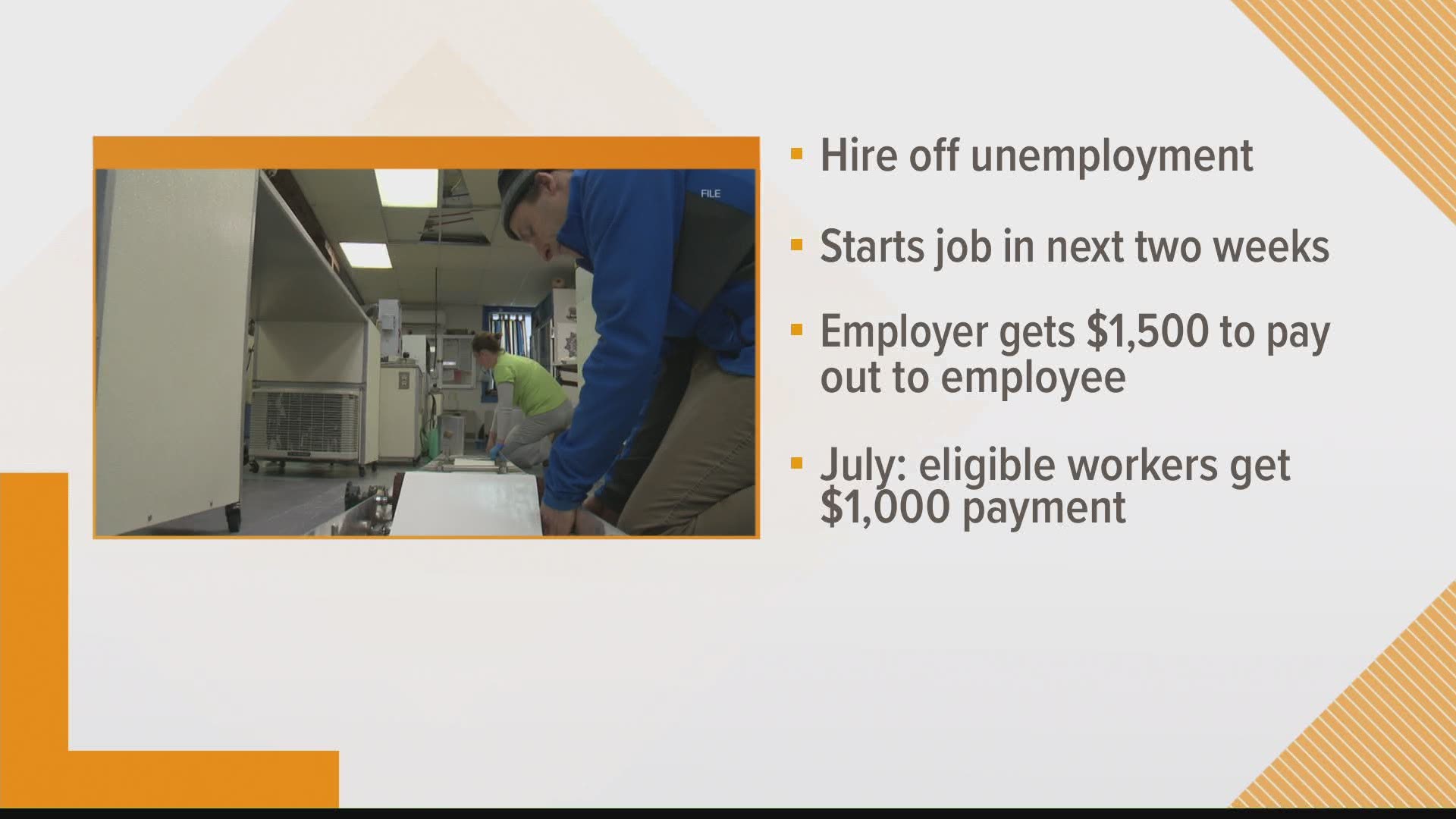 AUGUSTA, Maine — With thousands of Mainers still filing for unemployment benefits and the state continuing its efforts to rebound from the coronavirus pandemic, Gov. Janet Mills on Monday, June 14, announced a new program that offers cash incentives to get people back to work.

Using $10 million in federal funding, the Maine Department of Labor and the Maine Department of Economic and Community Development will give employers a one-time $1,500 payment to give to eligible workers who start jobs between June 15 and July 25, the Mills administration said in a release. The state had originally said there would be a one-time payment of $1,000 for those who start jobs in July, but later updated to say it would be a one-time $1,500 payment for anyone hired up to July 25.

Payments will be made on a first-come, first-served basis. Funds for up to 7,500 Mainers has been allocated, according to the release.

As of June 30, over 100 employers have applied for grants to cover about 300 workers, according to the Department of Labor. Of the initial applications, the Department of Labor said more than 20% were from the accommodation and food services industry, followed closely by administrative and waste services, and healthcare and social assistance employers.

“We have worked hard over the last fifteen months to get the pandemic under control so that it’s safe for everyone to return to work. Now COVID cases are down, vaccines are widely available, and jobs are plentiful,” Mills said in a statement. “Employers across the state are looking to staff up, which means there are opportunities for everyone to work, earn a living and contribute to our state’s economic recovery. With this new program, we are providing another tool to accelerate peoples’ transition back into the workforce, protecting their health and their long-term financial stability.”

Yet businesses across the state are experiencing a workforce shortage. Some businesses have also started to offer incentives—like signing bonuses, 401(k) plans, paid vacations, health benefits, and more—to entice workers.

Mills’ new “Back to Work” program is designed to return Mainers to work and advance the state’s economic recovery from the COVID-19 pandemic.

“We recognize that as the economy continues to improve, there are still barriers preventing some Mainers from going back to work and we want to help get them back to work,” Laura Fortman, commissioner of the Maine Department of Labor, said in a release. “With this new program, we now have another avenue of helping individuals overcome those barriers and rejoin the workforce while also supporting businesses’ hiring endeavors.”

Applications will be accepted from June 15 to July 25. The Department of Labor’s online portal, where businesses can confirm employees qualify and register their start dates, will launch later this week, according to the administration.

Once an employee has worked for eight weeks, the employer will provide documentation of the completion of the requirement and grant funds will be issued to the employee through their employer, according to the release.