According to the American Booksellers Association, more than 70 independent bookstores nationwide closed in 2020, and many others are still in danger of closing. 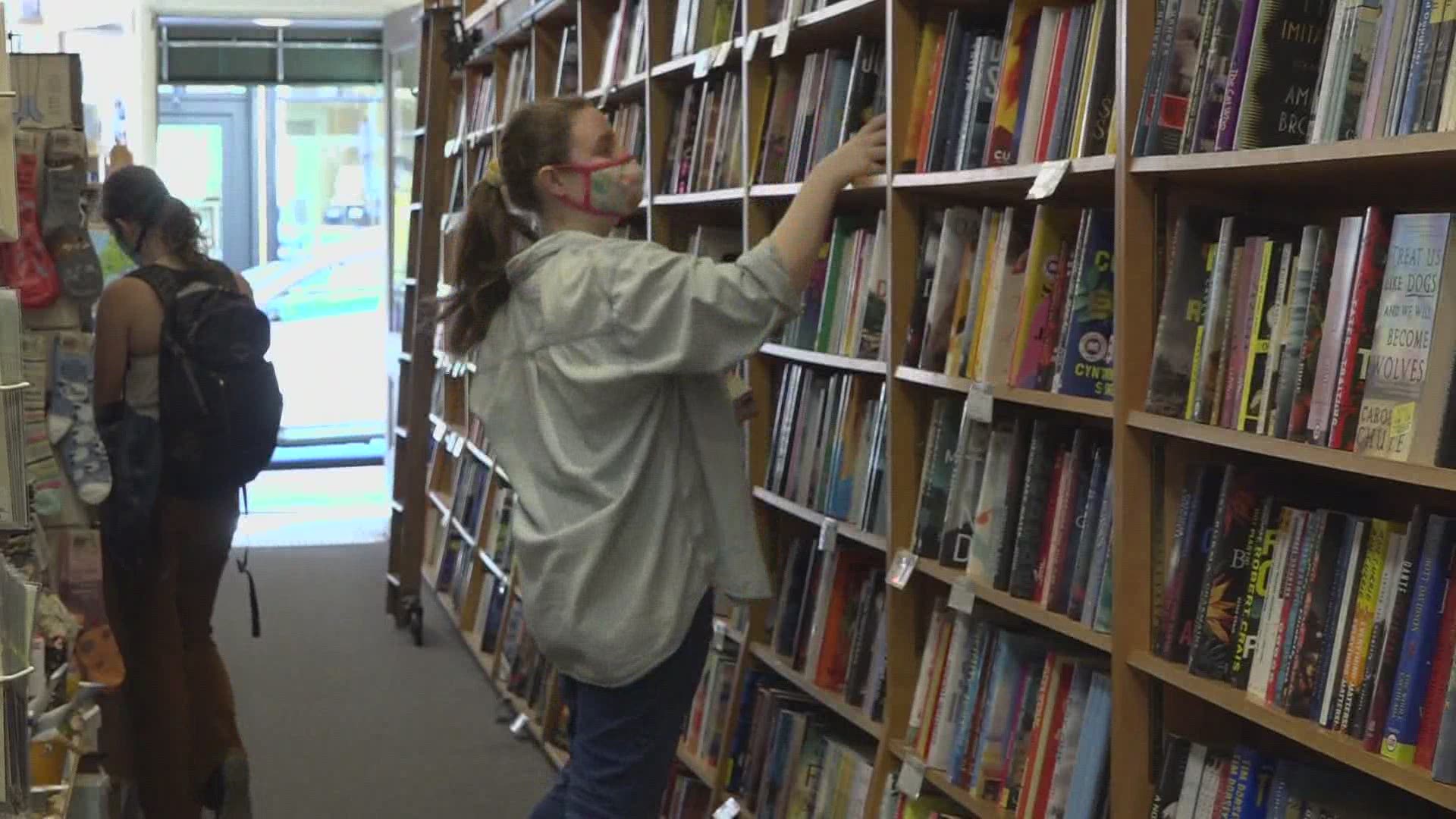 PORTLAND, Maine — Throughout the last year, we've seen many small businesses in Maine shut their doors for good.

Maine's independent book stores took a hit at the start of the pandemic, and some are still struggling to make up those losses.

That said, most Maine bookstores have now weathered the storm, thanks to loyal customers, with some seeing great business in recent months.

"People were reading more," store co-owner Jeff Curtis said, "but we sell so much more than just books. People were definitely doing jigsaw puzzles. Jigsaw puzzles were flying off the shelves."

In addition to jigsaw puzzles, cookbook sales were up, as were journal sales.

"People are not only reading," Curtis said, "but some have started writing more and reflecting in writing."

Curtis said, "What’s shocking is that it wasn’t just Mainers we were shipping books all over the country. Because so many people visit the coast in the summers, they knew about us and we were shipping books to people back in Texas who had vacationed here and knew about us and made a point of shopping our website instead of some of the big national ones. It was very, very fulfilling."

In the past year, we’ve reported on many small businesses closing. This is not one of those stories.📚 Since last fall, Sherman’s has seen double its normal sales! That, coupled with a record 2019 and the sale of its Camden store is allowing it to open 3 new stores this summer. pic.twitter.com/3CmUiJgbWs

According to the American Booksellers Association, in 2020, online sales at independent bookstores increased by 680 percent.

"We closed one...Our Camden store at the beginning of the pandemic," Curtis said. "Because of all the uncertainty, we didn’t know if we are going to be closed for one month or six months."

Co-owner of Portland's Print: A Bookstore Josh Christie said because of increased operating costs during COVID, the store hasn't felt a bump.

Christie said, "We committed to a few incentives for our staff (hazard pay, keeping everyone on at their full hours, increased benefits) and our customers (free shipping for most orders, a few attempts at local delivery, investment in our website, and virtual events platforms) which mean that while our sales have been up, our business is essentially flat over last year. Which, all things considered, we're happy for!"

At The Green Hand Bookshop in Portland, owner Michelle Souliere said, "Last year was brutal, there's no way around that. I have seen sales this winter (early 2021) which are a little higher than usual, though not a lot. My theory is that people are really making an effort to spend some of their stimulus money locally, and I am very grateful for that."

Terri Schurz of Mockingbird Bookshop in Bath said, "I'm beyond grateful to report that we have had abundant and generous support from the community of Bath and our neighbors. It seems to me that people have been doing a lot more reading because they have been home more. Also, because there has been an outcry in the country for change, books have offered ways to amplify that need, engage in it, teach and learn and connect. It seems to me, as well, that there has been an important shift in towns like ours, to shop locally as much as possible, to keep our communities thriving during such a difficult time. We certainly would not be here without the loyalty, love and support of our local shoppers!"

As for Sherman's, "Starting around October or so, our sales have been about double. It's just amazing," Curtis said.

Its recent surge in sales, coupled with 2019 being its best year ever, and the recent sale of its Camden location, has Sherman's planning to open three more stores this summer.

The new stores will be located in the Topsham Fair Mall between Renys and Lamey Wellehan, in the Windham Mall beside Renys, and in a freestanding building in Rockland on Maverick Street between McDonald's and Hannaford.

"It's not the result we expected when a year ago we were sitting basically unemployed," Curtis said with a laugh. "To think that a year later we would be opening three stores, I would not have gambled that."

RELATED: 'Good Boy' a life as told through seven dogs