Left at the altar: Maine’s billion-dollar wedding industry crushed by the pandemic 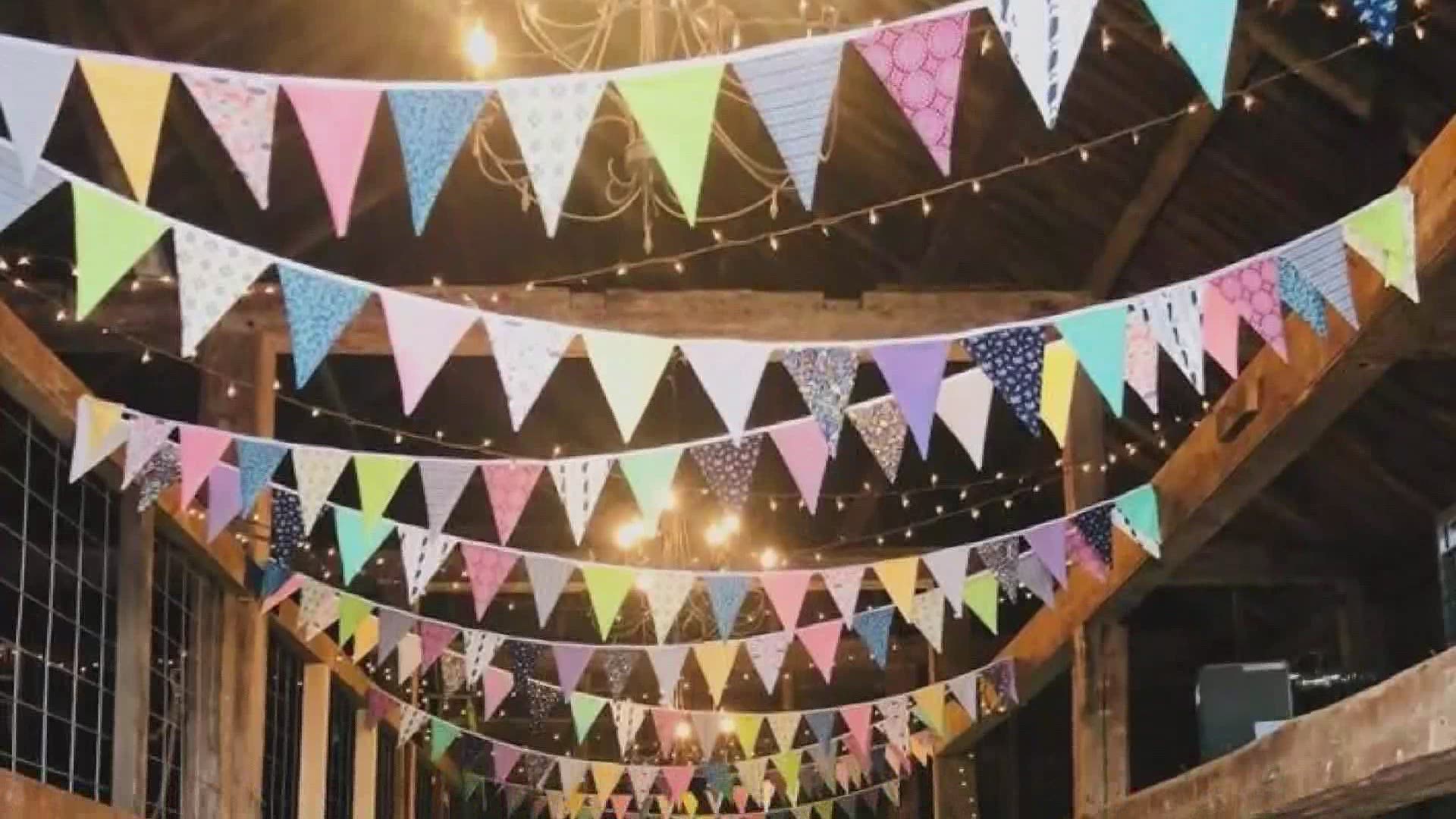 MAINE, USA — The coronavirus pandemic hasn't been easy to navigate, and it's been particularly tricky for Maine's wedding industry.

Weddings and wedding tourism contributed more than $927 million to the state's economy and supported more than 13,000 jobs in 2017, according to a report by the University of Southern Maine, and was on track to bring in more than $1 billion in 2020.

Business owners say that as destination weddings become more popular, the industry could grow even more.

Then the coronavirus pandemic swept the globe, putting the world and those businesses in lockdown indefinitely.

"Out of my 29 weddings last year I had eight," said Misty Coolidge, owner of Coolidge Family Farms in New Gloucester. "I cried a lot."

Coolidge Family Farms offers a variety of wedding venues as well as bartending services. For a while, a small business loan was all that kept the busy mom from closing her doors.

"It hurt me a lot and I spent a lot of time in tears just feeling for my couples, feeling for their experiences, and praying that this wasn't going to be the end of my business," she said.

Coolidge says she even had couple's try to sue her after she refused to refund their deposits. She followed her attorney's guidance.

"You don’t want them to lose thousands," Coolidge said. "If we could give it back, we would; but as a venue owner with so much overhead, their money is gone as soon as it comes in the door."

Coolidge's story is not unique. She is one of dozens of small business owners across the state still trying to rebound after the COVID-19 pandemic halted much of their business -- and income -- in 2020.

More than a dozen businesses on average play a part in a typical wedding, industry experts say. A couple might use a venue, a photographer, a hairstylist, makeup artist, caterer, a DJ or live band -- the list goes on.

But when state guidelines capped the number of people who could gather, venues were forced to tell couples that their special day would include only a fraction of their guest list.

Many couples canceled altogether, leaving small businesses across the state facing the possibility of closing permanently.

“It happened so fast that I didn’t even have time to be upset about it because it was just one thing after the other,” said Reuben Bell, co-founder of Blue Elephant and Catering.

Bell and his husband, Fausto Pifferrer, found themselves facing the same situation Coolidge did, but they were trying to manage a payroll of more than 150 people.

Their savings got them through temporarily, but the bills never stopped. Then the pair crafted a plan to save their multi-million-dollar business.

“I have my mortgage company, I have my electric bill, my landlord, and everyone asking for money, which all comes out of this money and this whole pyramid is now falling apart,” Pifferrer said.

As couples canceled left and right, Pifferrer had an idea. With the help of others within Maine’s wedding industry, the hashtag #PostponeDon'tCancel was born. The hashtag would end up trending on social media, grabbing the attention of thousands. It was the industry's way of getting folks to move their special day to another spot on the calendar rather than canceling altogether.

By doing so, the businesses wouldn’t miss out entirely, it would just postpone the cash flow.

“We gathered people from across the state to come take a very socially distanced photo and … it reached 188,000 people,” said Pifferrer. “We became the accidental activists.”

Among those in the photo was Courtney Weltzel, owner of Blush Bridal. The formalwear boutique lost an entire quarter of revenue across its three locations. Wetzel blames the pandemic and restrictions on store capacity.

To keep sales alive, she and her staff developed a virtual shopping model to give brides a taste of normalcy as they navigated a new challenge: shopping for a wedding dress online.

The staff would pull dresses for the brides in real-time during a virtual appointment before shipping them to them for a fitting. The dresses even included an “I said yes at Blush” sign. Wetzel said it was an instant hit.

“In the moment, to us, it’s survival and it’s nothing heroic,” Wetzel said. “This is what we do to still serve people.”

Despite finding a way to keep her business viable, Wetzel said state guidelines at the time didn’t reflect the true needs of Maine’s small business community. Instead, she and others said the guidelines catered to big-box stores and corporations.

“It shouldn’t be the same for a wedding venue that has a barn that has wide open massive doors with adequate airflow,” Coolidge said. “That shouldn’t be rolled into the same venue as a country club.”

“We don’t have a lot of a voice,” she said. “The struggle with us is we’re retail so we’re grouped in with stores that have 20,000 square feet.”

It wasn’t until the lobbyist group NACE, the National Association for Caterers and Events, became involved that industry leaders say they were able to get the attention of the Mills administration. Pifferrer and Bell spearheaded the effort, but they said others quickly joined the effort.

“It wasn’t that they weren’t taking care of us, they just didn’t know that we existed,” Bell said. “We are a smaller group within the larger hospitality industry in Maine and we do things differently, so the initial guidelines didn’t always apply to exactly what we did.”

“We realized that even though we were knocking on the door trying to explain this, nothing was happening, and that’s why we decided to bring the lobbyist in,” Pifferrer said.

Katrina Peterson leads the Maine chapter of NACE. She and her team asked small business owners what they wanted to tell Governor Mills and her administration.

They received feedback from 74 different businesses across the state.

“We had some really great responses,” Peterson said. “So we had not only the hard number data, the quantitative stuff, but we had sort of the qualitative, like, ‘This is how I’m feeling. This is how it’s impacted my business,’ and ‘This is not just about me but it’s about all of my employees’.”

Their strategy worked. Business owners met with Maine Department of Economic and Community Development Commissioner Heather Johnson in December to share their experiences during the pandemic and tell her what they hoped would be adjusted. They said they felt they’d finally been heard.

“We are grateful to Commissioner Johnson and the DECD for listening to us and bringing us in on the discussion,” Bell said.

“I think having a national organization really put us on the map and really got a table with the governor’s office,” Pifferrer said.

Last month, more than 12 months into the pandemic, the Mills administration released updated guidelines that better reflect the needs of Maine’s wedding industry.

The updates were welcome news for many small business owners, but some maintain the changes were too little, too late.

“All the other industries had their checklist immediately and here we are a year later and we’re just getting our guidelines,” said wedding officiant Maria Northcott. “That’s not okay.”

“In the beginning, it was kind of like survival mode for all of us and as time moved on I was definitely very frustrated and still am kind of frustrated with the position that small business has been compared to larger corporations,” Wetzel said.

Those within the industry are cautiously optimistic while bracing for a much busier year than last, while knowing it could take years for business to return to normal.

The Mills Administration appreciates the significant challenges the COVID-19 pandemic has created for Maine people planning weddings and hoping to get married. We have worked closely with wedding planners to design a COVID-19 Prevention Checklist specific to the wedding industry to help them safely conduct events.
Additionally, this is why we offered the Moving Maine Forward Plan to provide a measure of certainty and predictability to Maine’s hospitality industry, including those in wedding planning, for the spring and summer months.
We share their goal of wanting to make sure that anyone can hold their dream wedding in Maine, which is why we are so focused on getting vaccinations into arms and getting control of the pandemic and we hope this will result in a strong and profitable season for the wedding industry in Maine.