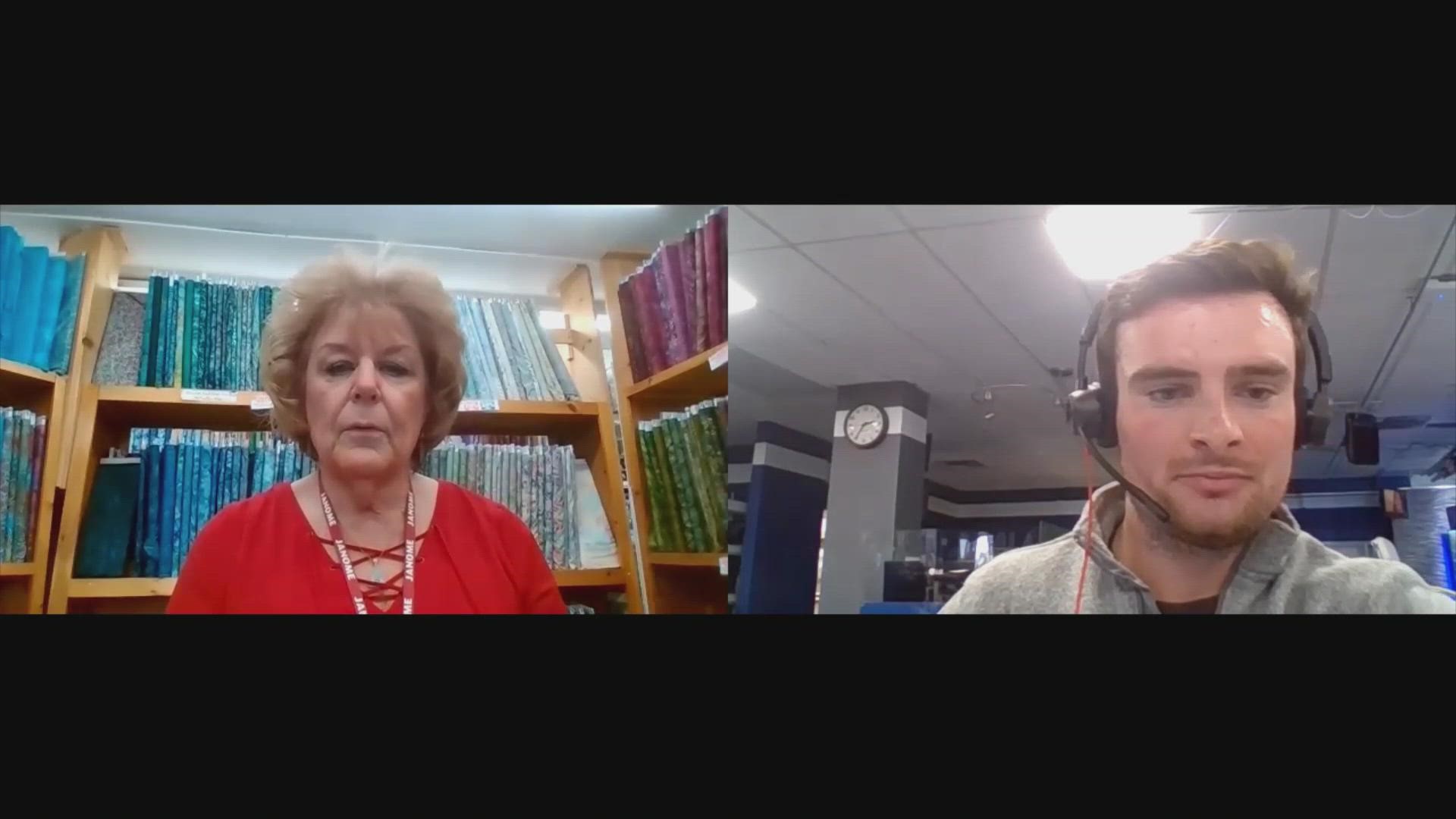 MADISON, Maine — Over 43 years in business, The Fabric Garden has seen plenty of changes and challenges from its spot on Route 201 in Madison. Through it all, however, the shop remained a place for creativity to flourish.

Owner Kala Murphy has announced her retirement, and the shop will close at the end of the year. Until then, the store’s entire inventory is marked down as much as 30%.

A native of Long Island, New York, Murphy became acquainted with Maine, and the Madison area in particular, as a kid through visiting her aunt and uncle who had a place on Clearwater Lake in Farmington.

She opened the shop with her Aunt Mahre and sister Beth in 1978, during an era when people sewed garments for their families, bridal dresses, upholstery, and home décor. Over the years, though, The Fabric Garden transformed into a quilt shop as home sewing waned and quilting gained popularity.

“Once the late 80s came and we weren’t garment-sewing anymore, women still wanted that creative outlet,” Murphy said. “And that’s what a lot of this whole business is. People want to create; they want to feel good; they want that confidence of, 'Wow, look what I made. Look what I’m going to give for Christmas.’ It’s just such a good feeling.”

Garments often require technical sewing in various directions and lengths, and if the garment doesn’t fit, it has to be adjusted and redone. Compared to garment-sewing, quilting provides easier and more immediate gratification.

“[Quilting] is sewing straight strips or angles, put them together, there’s no fit,” Murphy said. “It’s easy, it’s instant. So that’s really where the popularity of quilting took off.”

The shop rose with the rise of quilting, but it also benefited from the decision to begin selling Janome quilting and sewing machines — an idea that was born on Christmas Eve of 1979 when a man came into the shop looking for a sewing machine to gift to his wife.

The Fabric Garden began selling Janome sewing machines in 1984 and then expanded to selling Janome long arm quilting machines as well. Murphy said the shop has now become one of the top 25 Janome dealers in the United States out of more than 700 total. She credits this to the shop’s service and support, saying they give lessons and demonstrations and have always been available to answer customers’ questions about their machines.

It hasn’t simply been four decades of smooth sailing for The Fabric Garden. Murphy said there have been a few points where she thought the shop might not necessarily survive, especially in the early days.

Murphy’s Aunt Mahre invested her life savings into the business, and Murphy herself invested money she borrowed from her parents. There was a lot on the line.

“We opened in May. By December I was freaking out,” Murphy said.

“It took a long time. Probably a good four years of really, really watching it. No money out, really cautious, keep on going, we have to make this work, ” she added. “There was no other choice, you know? This is it. We are invested.”

Murphy said things got better around 1984 and 1985. But that was before Walmart and other department stores began to come to the area in the ‘90s. At that point, she didn’t know if her shop would be able to compete.

The financial crisis in 2008 was another difficult period since many of the shop’s customers were and still are older in age. When the stock market went down, a lot of people wanted to hold back on spending.

Soon the struggles of owning a small business in Maine will be a thing of the past for Murphy, but that certainly doesn’t make saying goodbye any easier. Saying goodbye to the shop also means saying goodbye to her “ladies” who work or shop in the store, many of whom have become family to her.

“[We’ve] gone through a lot. Yes, this is a store, and yes, we sell stuff. But we also share stuff,” she said. “We’ve seen weddings, we’ve seen births of children. There’s also deaths. My sister, Beth, when she died she was a really big part of this store. The outpouring of care to me was wonderful. So, they mean the world. It’s my family.”

Murphy said one woman has been working at the shop for 35 years and there are a couple of others who have been there for 18. Murphy's sister, Celia, has worked in the shop since 2007.

“We’ve seen the same customers come for years and years and years. It’s not really a client relationship, it’s a friendship," Celia said. "Quilters tend to have really huge hearts. They tend to be really caring, giving people.”

When Murphy took to Facebook to announce the shop would be closing, heartfelt comments poured in from quilters, some of whom have been shopping there since day one.

"I will miss that warm welcome and that beautiful smile, you were always there to give us a hand, and tell us all about the machines, the fabric, and of course everything else," one commenter wrote.

"Such a huge loss for the community!! Your knowledge and dedication has touched all of us," wrote another. "Thank you for the many good years that you provided such a valuable service to your customers and friends!! Wishing you all the best!! You will be 'sew' missed."

So what does the longtime owner of a quilt shop look forward to doing in her retirement? Quilting, of course!

“It’s funny, I used to do a lot of sewing and a lot of projects. And then as the business got busier, I had to do other stuff. You know, I had to be doing bookwork or ordering or whatever, I couldn’t just go home and say, ‘Oh, I’m going to sew for four hours.’ I just couldn’t do that,” she said. “I’m actually looking forward to being able to do some quilting and, you know, I’ve been picking through the stash too.”

At The Fabric Garden’s height, it had about 10,000 bolts of fabric in stock. Now, Murphy estimates there are about 3,000 bolts left to be sold. She's hoping that the sale will help her clear the inventory and give customers a chance to get quality items at a discount.

“I could have liquidated my business with a phone call and be done. I chose not to. I chose to have my incredible inventory of top-quality fabrics, machines, notions here for my existing customers to get at a great discount,“ she said. “I want my customers to have the ability to get great stuff at a discount and that’s why I chose to do that. Yes, it’s going to take longer. Yes, we’re exhausted at the end of the day. But I think it’s something good for the customers.”

Murphy hasn't revealed much about what will inhabit the space currently held by The Fabric Garden. The good news, she said, is that it will be a similar type of shop, and it will be owned by someone she's known for years. She said the new shop will also sell Janome machines, but she isn't sure at this time what the store will have for fabric inventory.

UNSCRIPTED | Owner of The Fabric Garden in Madison on shop's 43-year evolution, decision to close