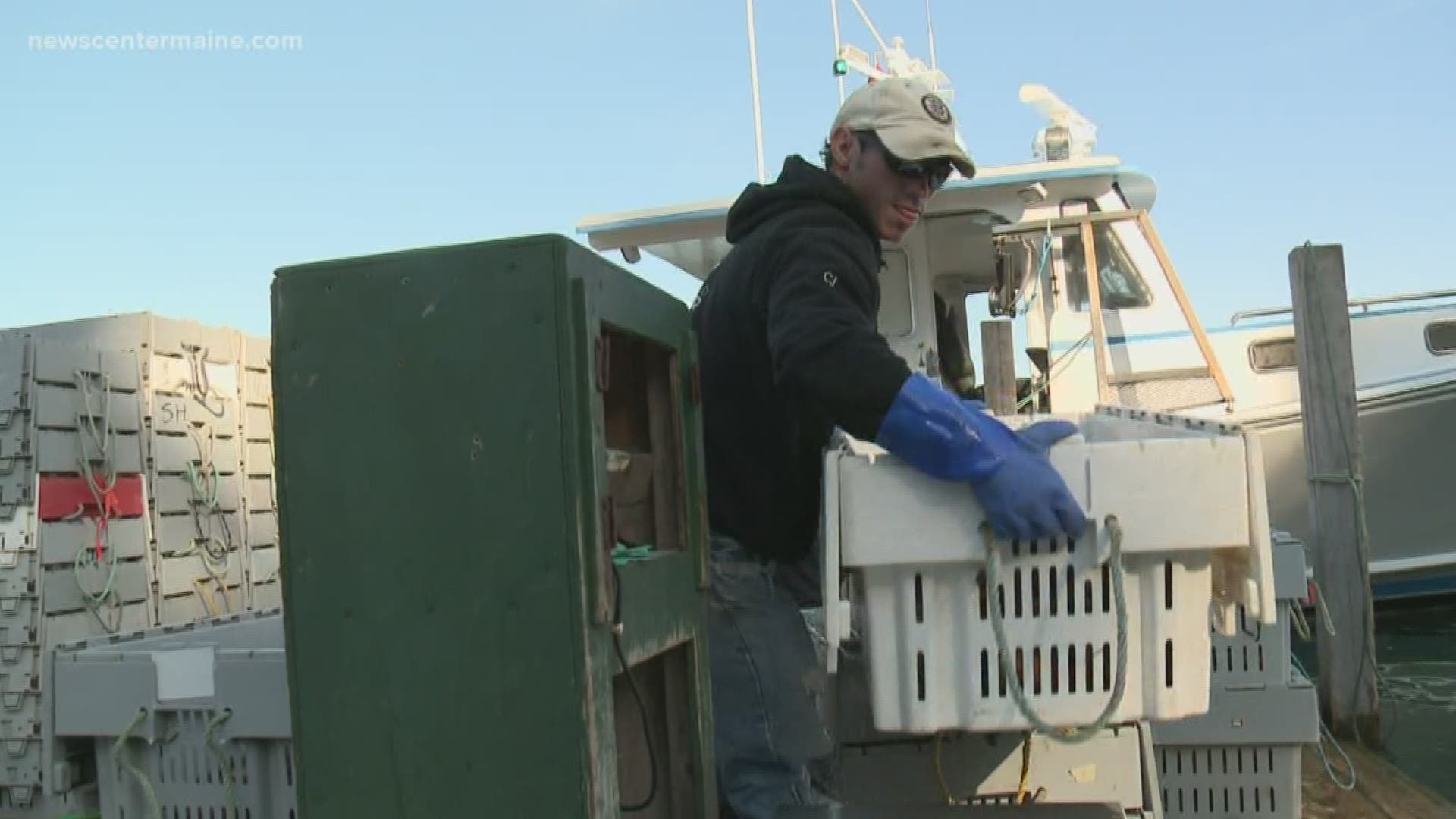 STONINGTON, Maine — As High Reynolds shows us around his new, high-tech lobster processing plant in Bucksport, he talks about how the lobster business suddenly changed in 2018, because of the U.S. trade war with China.

"I understand the trade war has a greater purpose, but the collateral damage is here in Maine. As a net exporter to Asia, we're the ones taking the hit in this."

Reynolds' business, Greenhead Lobster, is based in Stonington, Maine's biggest lobster harbor. And Greenhead was one of the more prominent exporters to China—until the current trade battle prompted the Chinese to impose a 32% tariff on American lobster imports. Much of that lobster was coming from Maine. That tariff followed a decision by the European Union two years earlier to give preferential treatment to Canadian live lobster, by eliminating the tax on those imports. American lobster still faces an 8% tariff in Europe.

That "double whammy" caused severe damage to Maine's growing lobster export business, which had helped raise process to fishermen even as lobster catches remained at or near historic highs. Its forced dealers like Greenhead to refocus on the already crowded domestic marketplace, while also looking for new opportunities to sell to other countries.

"So there are businesses doing that in places like the middle east, Singapore, South Korea, Vietnam, (but) that doesn't happen overnight, and it is a lot of work," says Annie Tselikis, director of the Maine Lobster Dealers Association.

The decline in exports to China has also shone a light on the strength of Canadian lobster businesses in the export market. The maritime provinces also have a long history in the export world. Still, the zero-tariff deal with the EU and the Chinese tariff on the U.S. have helped fuel the dramatic growth of those exports, particularly for Nova Scotia. The province is the largest lobster producer in Canada by far. Landings data for 2017 showed Nova Scotia and Maine nearly equal ---Nova Scotia landing   49,931 metric tons,  with Maine catching 50,759 metric tons.

"Lobster is the King we call it in Nova Scotia," says Keith Colwell, Nova Scotia's Minister of Fisheries and Aquaculture.

Seafood, in general, maybe king in the province. Colwell says the industry is the second biggest employer in Nova Scotia, with only the government providing more jobs.

And the provincial government has been working on expanding export markets. The Minister says that in Canada, the federal government regulates fisheries and fishermen, including the various lobster seasons throughout the Maritimes —a big difference from year-round regulation in Maine. In Nova Scotia, the Ministry of Fisheries focuses on quality and marketing, including helping to identify and connecting their businesses with potential new markets.

The effort has brought a result, according to Minister Colwell.

"When I took over the portfolio six years ago, we were exporting $974 million per year in seafood," he says. "That's total, including aquaculture and everything. This year gone by, we are almost at $2.3 billion, and we've been growing rapidly at that pace."

The growth in cargo traffic at Halifax International Airport, where an air cargo facility built opened in 2016, is causing much-needed expansion. 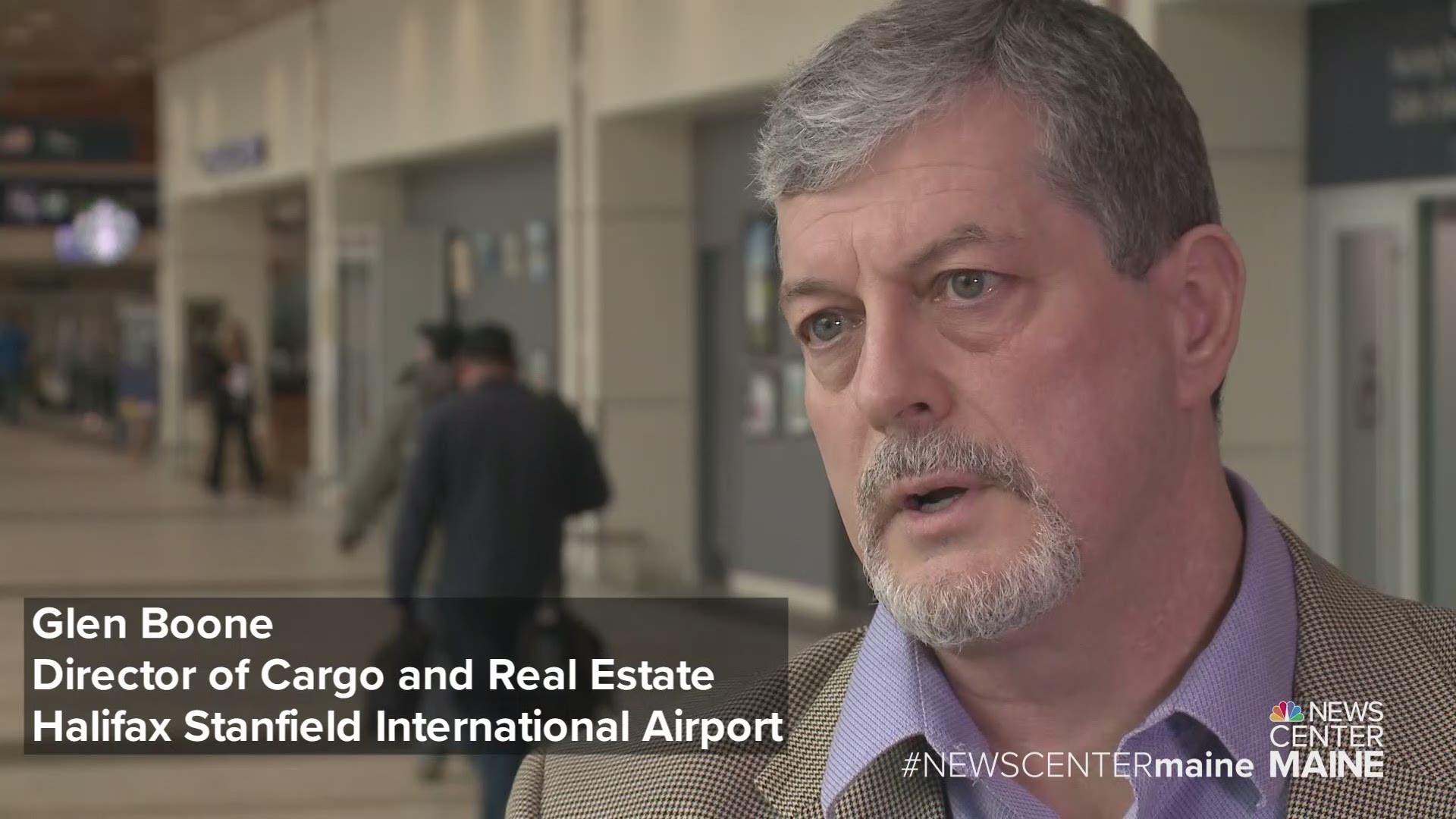 In Maine, Hugh Reynolds says the growth of Canadian exports, particularly the business with China, has fueled additional growth of dealers in Nova Scotia and the other provinces to reach out to more countries and markets.

"They've got 747's full of lobster going to China," Reynolds says. "Amazing. If someone said there would be 747s leaving weekly to one destination, if someone told me a few years ago, I wouldn't have believed it."

The Halifax airport has just started another expansion to meet the demand. It's a $36 million project to build larger ramp space, to park up to four jumbo jets at a time, many of which they expect to be loading lobster.

While Nova Scotia has been able to take advantage of the U.S./China trade war and the resulting tariff on Maine lobster, Minister Colwell credits much of their success to imposing stringent quality standards. He says the province has regulations that require all lobster dealers and processors and their employees to take training classes in proper handling and storage of lobster. Also, he says the ministry has created strict new standards for shipping and storage of lobster and is encouraging their customers to follow those standards.

"I don't know what you have in the U.S. for quality standards, but ours are the highest in the world, and that is really securing markets for us," Colwell says.

He also offered to share the standards with businesses in New England. 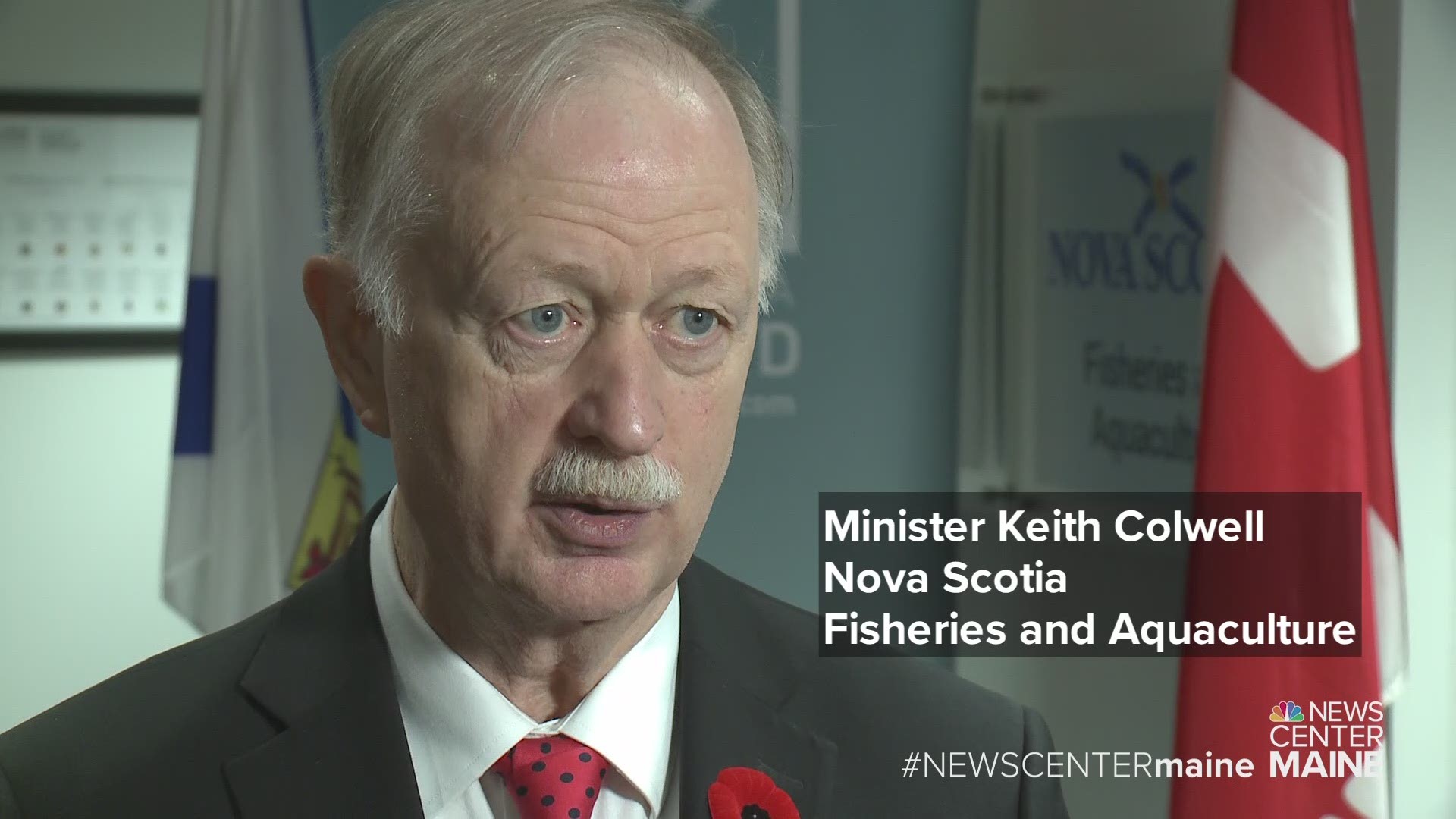 Maine's Congressional delegation continues to try to pressure the Trump Administration to settle the trade war with China so the tariff can be removed. Just last week, the delegation sent a letter to the U.S. Trade Representative, urging him to negotiate a more favorable arrangement with the EU.  There is still some export business with Europe, according to Annie Tselikis,

Annie Tselikis of the Lobster Dealers Association says fixing the current tariff problems is the real answer to reclaiming some of the export markets from Canada, though she and others admit they are "tough competition."

The Canadians are also colleagues in the complex, cross-border lobster business. Much of Maine's lobster catch typically gets shipped to New Brunswick or other provinces for processing into lobster meat. But Tselikis says that's not all.

Some dealers, like Hugh Reynolds at Greenhead, aren't waiting. He recently opened a large, modern lobster processing plant that produces packaged, cooked lobster meat and raw, frozen lobster tails. His prime target is the U.S. restaurant market, already very competitive with dealers from both Maine and Nova Scotia battling for market share. But Reynolds says he thinks the right quality product will find a spot in the marketplace. 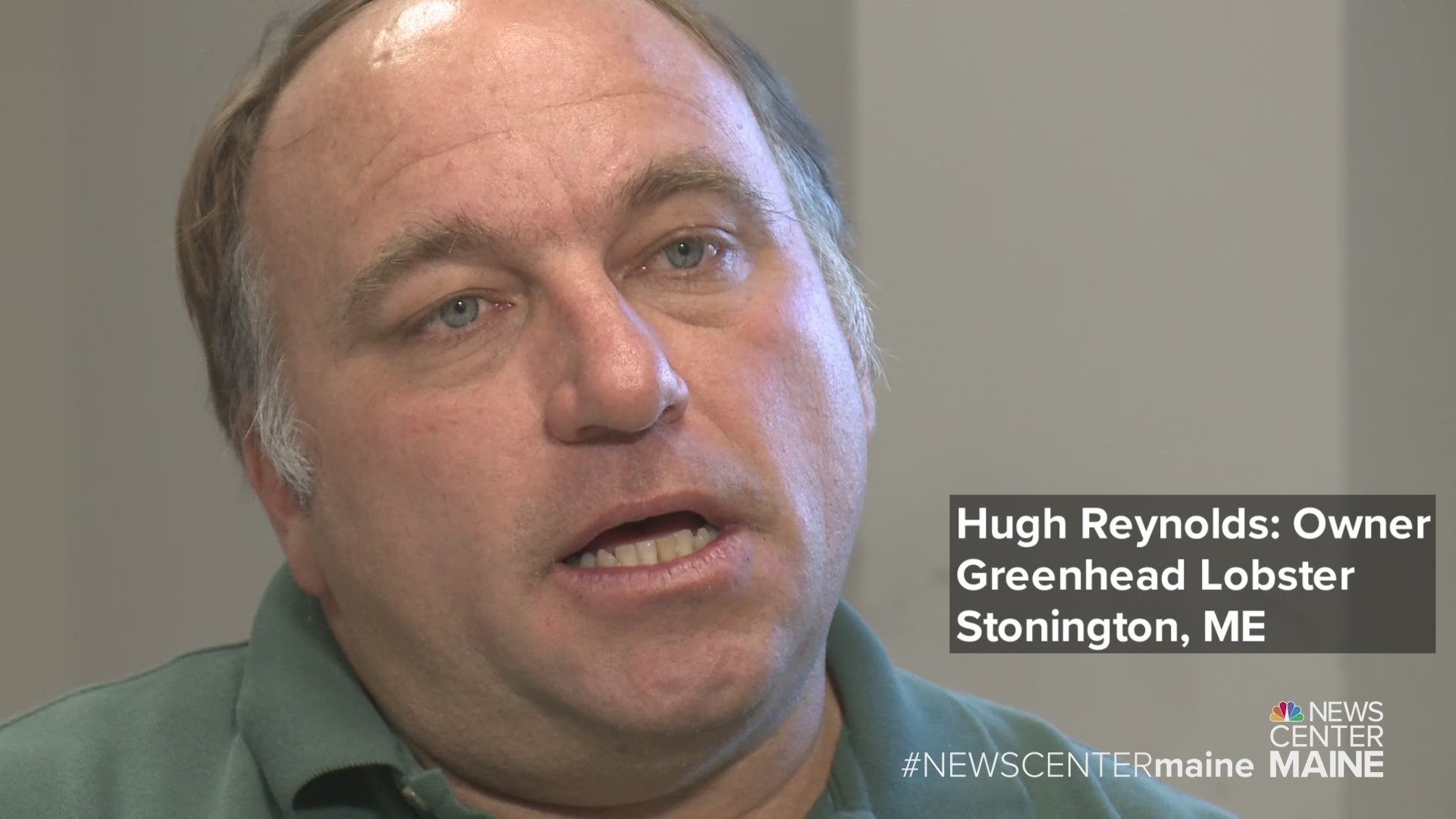 "What we're trying to create here is something that's processed but tastes like a lobster you had on the dock in Stonington," Reynolds says, as he points out the technology used in the new plant.

Asked if he thinks the export business can come back once tariff issues are resolved, he says it can, although it will take lots of work by dealers to reclaim the trade. But Reynolds says he isn't staking the company future on exports. "It's not our focus now, but wherever there's opportunity, I'll look at it to create value for Maine lobster."