Lobstermen who fish further offshore would be required to limit the number of vertical lines and fish more traps per line. 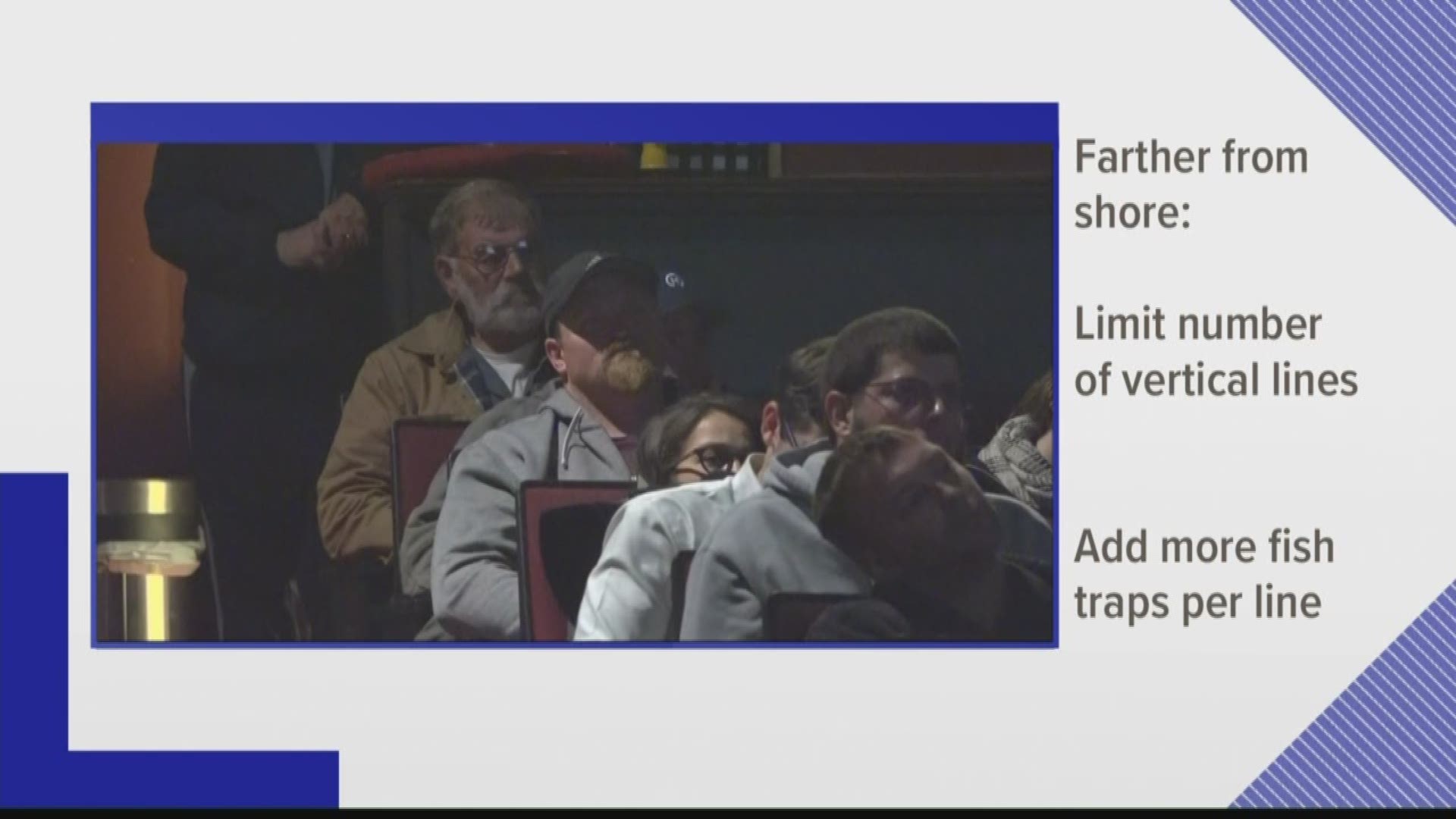 ELLSWORTH, Maine — Lobster fishermen from Downeast Maine on Wednesday gathered at The Grand in Ellsworth Monday evening to hear details of the measures proposed by the state to help mitigate danger to right whales.

Patrick Keliher, the commissioner of the Maine Department of Marine Resources, explained the plan the DMR will submit to the federal government, hoping the proposal is strong enough to meet guidelines.

Unlike a previous plan, the DMR does not propose any trap reductions or closures, Keliher said. For those who fish up to three miles from shore, changes will be limited to marking their lines and other gear with purple to identify them as from Maine, and adding a weak spot to lines that would allow them to snap should a whale become entangled.

But under the proposal, lobstermen who fish further offshore would also be required to limit the number of vertical lines and fish more traps per line.

George Bernier, who fishes out of Gouldsboro, said the proposed changes -- while more palatable than the previous plan -- still increase the danger and the cost for fishermen.

Bernier said that even with a stern man on board, someone could still get dragged overboard -- and the risk increases when a single line is linked to as many as six traps.

"With pairs [two traps], you can generally turn on it and -- God forbid I've never had it happen -- but if that were to happen, you could turn and get him back in. You get into something fives or bigger, it's extremely dangerous. There's a lot of weight there. You can't just turn and haul that back in."

Bernier said plenty of fishermen have thought of selling out but said they are just in too deep. Many would face bankruptcy if they did so, he said.

Keliher told those gathered on Monday that a final rule is expected in summer 2020 with implementation likely in 2021.

He urged fishermen to submit written comments, noting that they would be particularly important if lawsuits are filed as a result of the federal requirements. Already a number of environmental groups, including the Conservation Law Foundation, have sued.

"There's no guarantee this will be accepted by the [federal] agency, but we believe this ... makes a very strong case," Keliher said.

Additional hearings will be held on Tuesday in Waldoboro and Wednesday in South Portland.