The president of Switchyard Brewing Company said while studying payroll data, he discovered a glaring tipping disparity, depending on a server's age, gender or race. 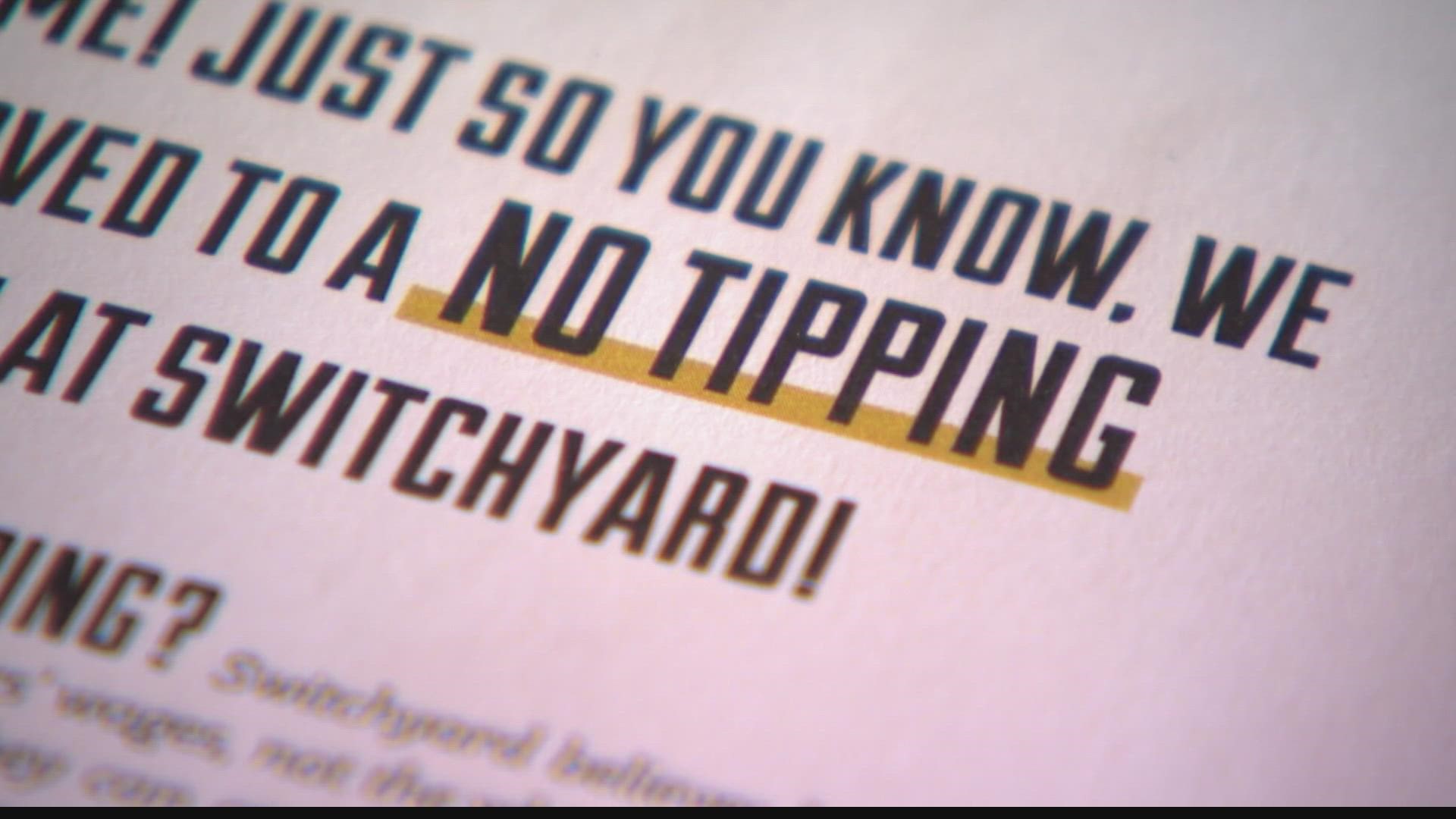 BLOOMINGTON, Ind. — After an especially challenging year in the restaurant and bar industry, a brewery in Bloomington is making a big change that impacts its servers, bartenders and customers.

Switchyard Brewing Company implemented a "no tipping" policy two weeks ago. So now, if you buy a beer from the tap, you don't have to tip.

Customers see the switch right on the first page of the menu with the reasons why, including what owner and Switchyard Brewing president Kurtis Cummings calls tipping's "classist, racist and sexist history."

"It literally kept me up at night because of this issue in the service industry," Cummings said. "I felt like we weren't doing everything possible as a company to take care of our coworkers and our staff."

Credit: WTHR
Switchyard Brewing Company's new no tipping policy is described in detail on the first page of its menu.

Cummings said while studying payroll data, he discovered a glaring tipping disparity, depending on a server's age, gender or race.

"I saw a very big differential between the young, white, millennial female and the middle-aged African American female. There was about a 25% pay difference," Cummings said. "And tipping says everything about the person providing the tip and nothing about the employee or their service."

In Indiana, minimum wage for tipped workers is only $2.13 an hour.

They start at $15 per hour and quickly rise after 90 days to an average of $18 dollars an hour.

They also don't have to work weekends to get the most cash from tipping customers.

At the beginning of this month, we completely eliminated tipping in our taproom in favor of paying our employees a...

Server and bartender Carrie Burnett said the change has made a real difference in her work-life balance.

"I have two kids and a family, so being able to do stuff on Friday and Saturday nights and not have to always block that off for my workdays has been super helpful," Burnett said.

Plus, paychecks are no longer at the mercy of customers and servers don't have to tolerate customer harassment to earn a tip.

"Sexual harassment in the restaurant industry, in the brewing industry from customers is insane," Cummings said. "70% of the sexual harassment claims that are brought every year are from the restaurant industry. We are now empowering our staff to stand up for themselves and say 'Hey, that's not OK' and they don't have to worry about their pay being affected. Again, tips do not provide better service. Tips do not correct poor service. Tips very simply say everything about the person tipping and nothing about the employee."

With no tipping and to give his workers better pay, Switchyard customers are charged more on the menu.

So a beer is a dollar more than it was a few weeks ago.

But owners and managers say the feedback for this first in Monroe County has been positive and they expect more restaurants to follow suit.

"A lot of people told us 'don't do it because people are in the service industry for tips. You're not gonna get anyone that wants to work for you'," Memmott said. "We've totally seen the opposite of that. I think it's the future, going no tipping, and I think we're just the first people to do it."

"We have had no staff leave since implementing it and we've had only 100% positive comments from our community and our customers," Cummings added.

Besides higher pay, Switchyard also added free "video visits" for urgent medical care and free mental health sessions with a therapist of their choice for all employees, including part-timers.

What other people are reading: