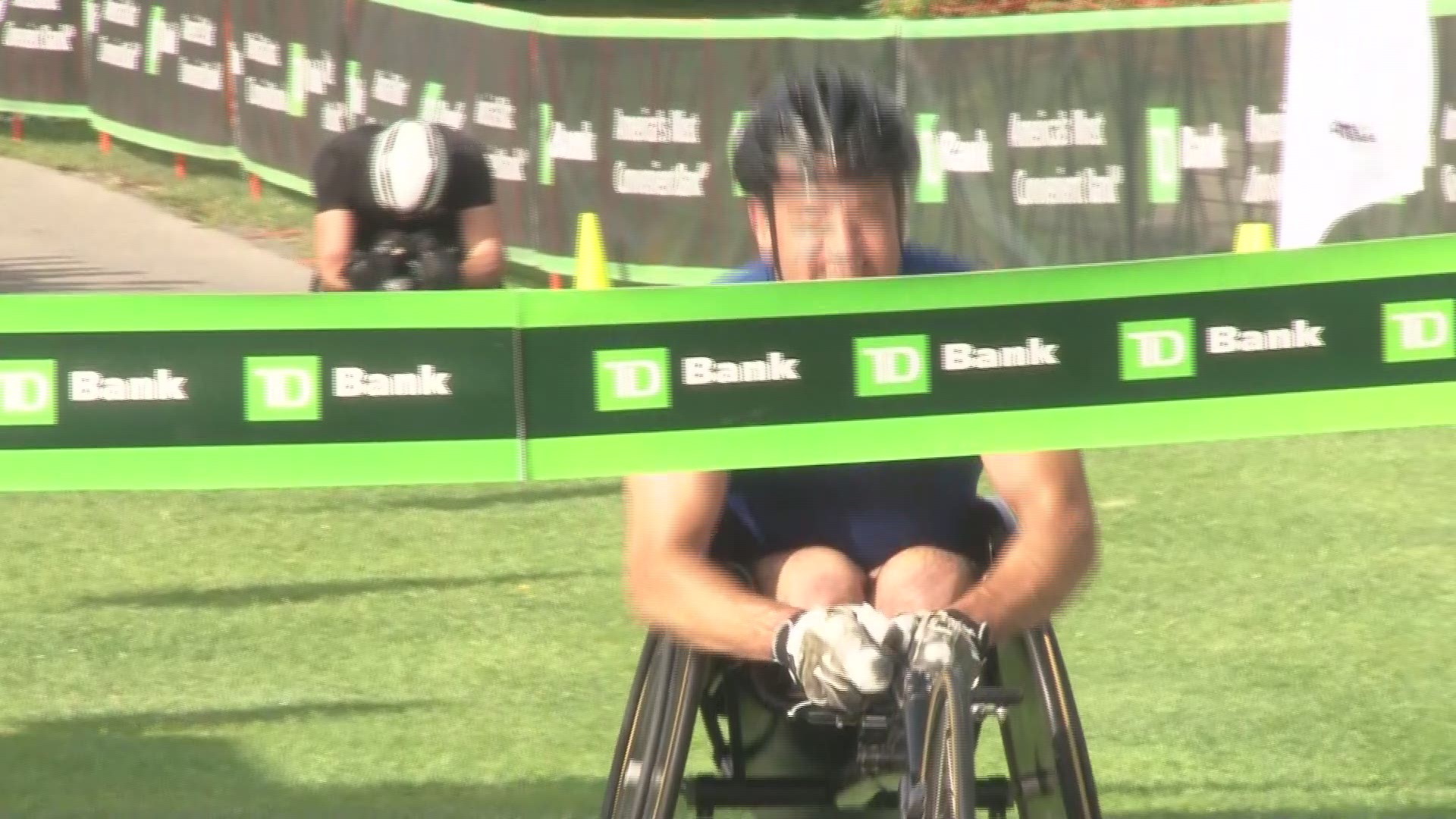 CAPE ELIZABETH (NEWS CENTER Maine) — Under a gray blanket of clouds, Jake Robertson from New Zealand didn't let the heavy, humid New England air weigh him down as he crossed the finish line in Maine's most notable race snagging the first place.

While elite runners crossed the finish line in less an hour, other runners slowed down to walk the route including this mother and son duo.

While it was a grueling 6.2 miles for some runners participating in the 2018 TD Bank Beach to Beacon, Roberston cleared the pavement under his feet so quickly, each mile passed in less than five minutes. His unofficial race time clocked in at 27:37, the third fastest finish in the race's 21-year history.

Robertson had a clear and simple strategy: start strong, run fast, stay in front. He led the pack of elite runners from the race's inception but by mile three Robertson was a lone runner on the Cape Elizabeth roads.

The tall 28-year-old kiwi moved to Kenya when he was just 17 along with his twin brother to train and has raced and placed in many notable races but he seems to be on a winning streak this year; he took first place at the Houston Half Marathon with a time of 1:00:01.

► WATCH RACE IN ITS ENTIRETY HERE

Aside from the first place kiwi winner Jake Robertson, Maine's own Ben True came in among the top three finishers with an unofficial time of 28:30 but because he is no longer a resident Ryan Smith of Farmington snagged the title for the first Maine man to cross the finish line.

Jake Robertson, bib 4, of New Zealand had a strong start leading the elite runner's pack and continued it throughout the race to win the third fastest time the race has ever seen.

Sandrafelis Chebet Tuei of Kenya crossed the finish line first in the women's race with Olympic athlete, Ababel Yeshaneh just on her heels. Tuei's unofficial time came in at 31:21.

2018 Beach to Beacon Maine winners were Ryan Smith from Farmington and Michelle Lilienthal of Portland.

Tony Nogueira from New Jersey was the first push rim competitor to cross the finish line making it his 11th Beach to Beacon win.

Katrina Gerhard broke the women’s record by about a minute and a half, crossing the finish line at 26:46 unofficially to win the women’s push rim race.

The 21st running in 2018 featured a host of elite runners including 2008 US Olympic flag bearer Lopez Lomong and Providence-based Molly Huddle, former American record holder in the 5,000 meters, as well as Maine natives Ben True and Emily Durgin.

Last year's Maine resident champion Jesse Orach of Gorham returned to defend his title for a third straight year. His finish last year was seen all around the world. After suffering heat stroke and falling down, he was helped up by fellow Mainer Rob Gomez, also returning in 2018, and carried over the finish line to take first.

We're all in it together

► Those who push through the finish line (Aug 3)

► The Beach to Bacon: a runner's atypical treat waiting at mile five (Aug 2)

The course, once a training route for young Cape Elizabeth resident Joan "Joanie" Benoit, who later went on to win the first women's Olympic marathon in 1984, now serves as the venue for one of the world's most premier annual road races.