Two bales of shredded plastic were dumped into the water near Mack Point in Searsport after a crane accident. The waste was headed to Orrington to be incinerated. 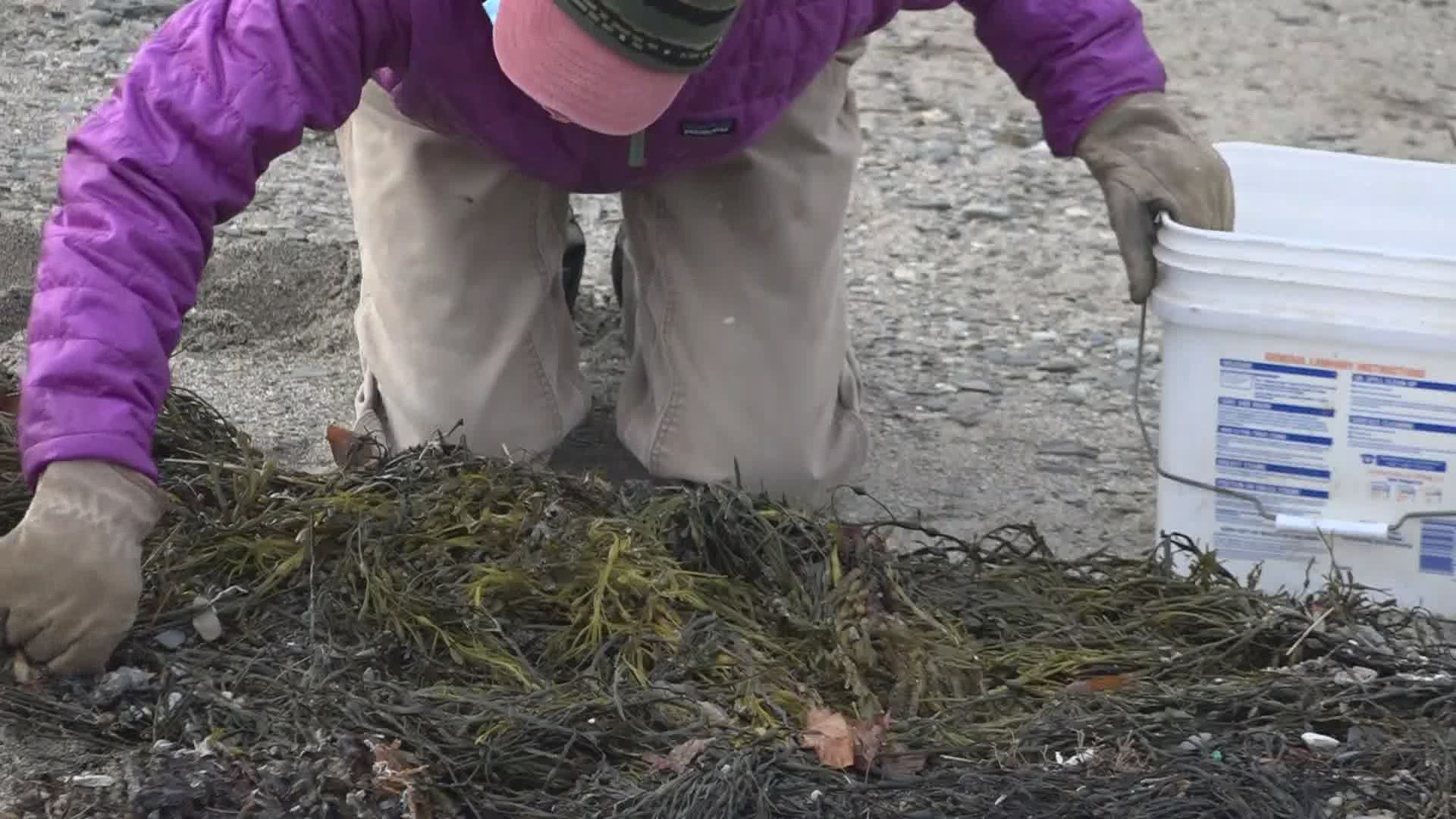 SEARSPORT, Maine — Volunteers and crew workers have been spending the last few days raking and filling buckets on Sears Island. It's not part of some holiday scavenger hunt, it's a cleanup.

During off-loading at the Sprague Energy Terminal at Mack Point in Searsport, a crane accidentally dropped two bales of shredded plastic into the water. The boat docked was from Northern Ireland and was bringing literally metric tons of trash to Maine.

The intended destination for that plastic was the Penobscot Energy Recovery Company in Orrington (PERC) which takes waste, incinerates it, and repurposes it.

Rolf Olsen is the Vice President of the Friends of Sears Island. The non-profit manages and takes care of Sears Island on behalf of the people of the state of Maine.

He said the bad weather over the weekend was one of the reasons the plastic washed up onshore. This is not the first time bales were off-loaded from international vessels in Maine, but he said this was the first time it happened in Searsport.

After the accident, Sprague hired crews from Clean Harbors to immediately start the cleanup. Olsen, his group, and other volunteers have been assisting in the pick-up as well. On Thursday, the attention was on the smaller remains of the waste.

“Little quarter size or smaller pieces of plastic have washed up on the beaches here," Amy Grant, the President of Upstream Watch said.

Upstream Watch is an advocacy group that protects environmental resources in and around Penobscot Bay. Grant rallied members of her group to join nearly 50 people picking up the plastic.

“Somebody said let’s go help them and that seemed like a great idea," she added.

While this was an accident, Sarah Nichols said this entire mess could have been avoided. Nichols is the Sustainable Maine Director for the Natural Resources Council of Maine.

“I have never heard of an instance where this has happened before," she said. “This wouldn’t of happened if the state hadn’t approved the facility permits for the Fiberight plant in Hampden.”

The Coastal Resources of Maine facility in Hampden was operated by the company Fiberight under the direction of the Municipal Review Committee (MRC). The MRC is the organization that controls where trash from 115 communities in eastern and central Maine is disposed of.

The Fiberight plant operated much like PERC as it converts trash and recycling to energy. Since there wasn't enough waste to go around, PERC had to get trash from out of state.

“They really are hungry trash monsters, the reason why they have to import this waste is because their boilers need a certain amount of material to operate efficiently," Nichols added.

The Fiberight plant closed this spring and the MRC has not yet found a new partner to run the facility.

Nichols added the reason other countries send their waste here is that it is easier to ship it than dispose of.

“The cheaper it is, that’s where the waste is going to go.”

A loophole in state law, she added, allows any trash to be disposed of it touches state land. Nichols hopes Maine legislators rework that so we don't continue to be a dumping ground for other states or countries.

She added more than a quarter of waste dumped in the Juniper Ridge Landfill in Old Town is from out of state because of the loophole.

While Maine continues to navigate through this waste issue, volunteers on Sears Island want to do all they can to maintain the land in hopes of attracting more visitors.

“I hope people come out and visit," Olsen said.

“It’s a beautiful place and we want to keep it that way," Grant added.