After bales of shredded plastic were dumped into the Penobscot Bay Mainers are asking, why are we taking out-of-state trash? 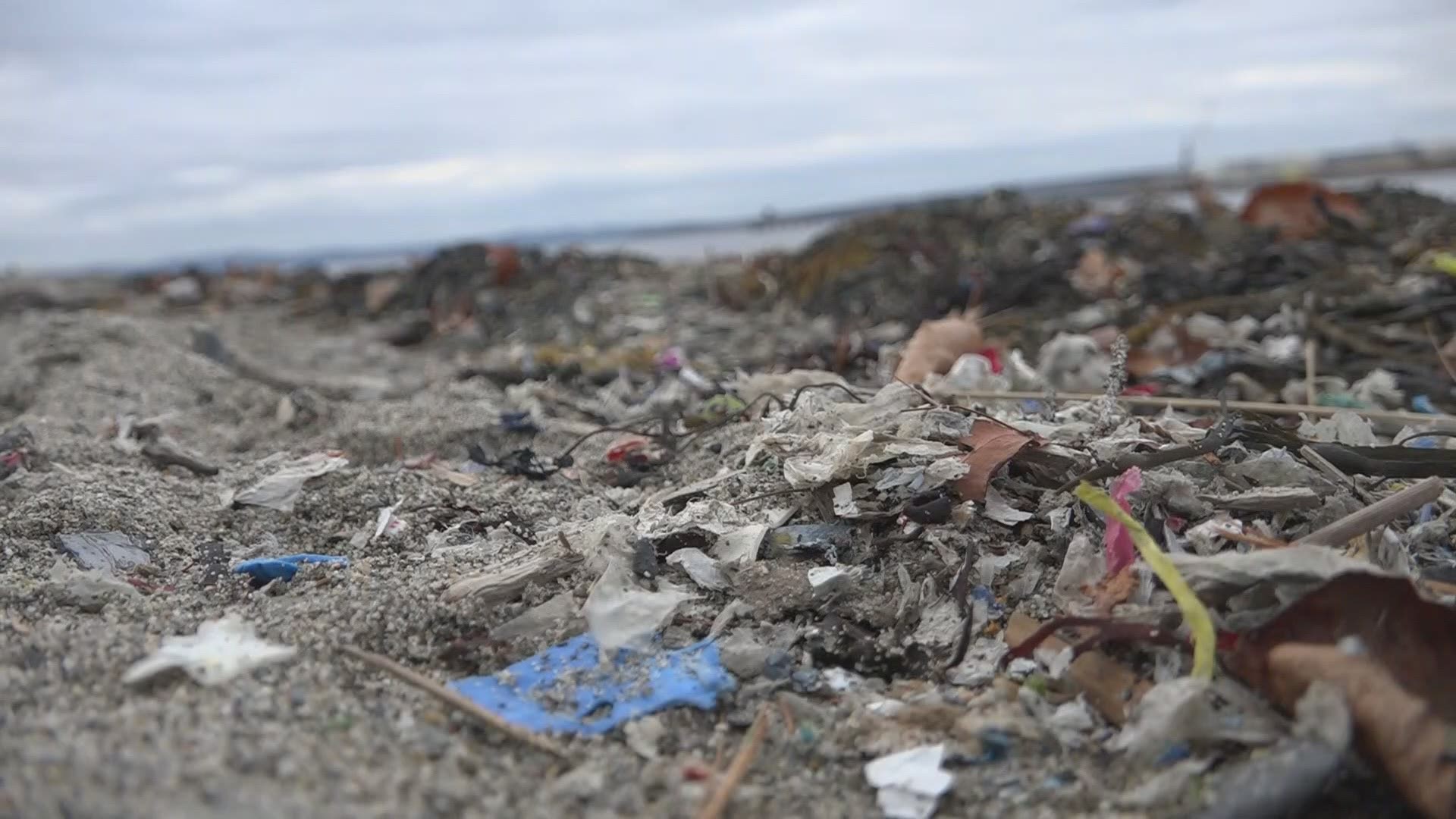 SEARSPORT, Maine — When you visit Sears Island, you expect to explore walking trails and beaches, not stumble upon trash. But that's exactly what island-goers saw on the shoreline last week.

“I saw a picture that someone had posted, and I was like 'wow, that is horrifying,'" Sally Brophy said.

Brophy is part of the Upstream Watch advocacy group that fights to preserve and protect rivers in the mid-coast. Brophy and members of the group spent days picking up trash after an off-loading accident dumped two bales of shredded plastic into the water.

Besides the environmental concerns, another concern is what the trash was doing here in the first place. The plastic was onboard a ship from Northern Ireland and was to be trucked and delivered to the Penobscot Energy Recovery Company (PERC) in Orrington to be incinerated.

“We wanted to have this as a storable material, it’s supposed to be nice and stable," Plant Manager Henry Lang said Wednesday.

He added it is unacceptable for the waste to end up in the Penobscot Bay and his company has been working with volunteers and clean-up crews to help pick up the mess.

That clean-up may take longer than expected. Brophy explained a University of Maine professor studied the currents of the Penobscot Bay and they move in a circle formation.

“It goes around Islesboro, back out to North Haven, and back into Belfast harbor so it would several weeks before something flushed out to the open ocean," she added.

For the coming days, Brophy will be checking her current map and data and reaching out to beachcombers to see if they notice if any trash washed up onshore.

While this was an accident, the question of why Maine is accepting trash from overseas remains.

David Burns is the Director of the Bureau of Remediation and Waste Management at the Maine Department of Environmental Protection (DEP).

“The point of origin is not a criteria for determining waste acceptance at the PERC facility," he said. Burns added the facility has a license for that plastic material.

Maine law does not allow for out-of-state trash to be dumped in landfills, but there is a loophole. If waste is processed in Maine, it can be disposed of here. Since the offloading occurred at the Sprauge Energy Terminal on Mack Point in Searsport, the waste could make its way to PERC.

"To us (the plastic) represented a fuel that we could store and have on hand for the times when we run low on fuel," Lang said when asked why PERC bought waste from Northern Ireland.

Lang explained the plant needs enough waste, or fuel, to run the boilers during the winter season and make sure the facility is operating efficiently. The purchase of this pre-processed plastic waste was done to add reserves for the company's waste supply.

“You have to add on the cost of processing (raw waste) into fuel whereas this is pretty much ready to go," Lang said of the benefits of buying this plastic.

The dumping accident is currently under investigation by the DEP.

“Going forward there will need to be better procedures in place to adequately protect the environment," Burns said.

“To have (the plastic processing plan) turned on its head and have some portion of it end up in the bay has been a nightmare," Lang added.

Maine's waste industry has been navigating through uncertain times like everyone during the coronavirus pandemic, but for extra reasons.

The Coastal Resources of Maine facility in Hampden operates much like PERC as it collected and repurposed waste from 115 cities and towns across northern and central Maine for months starting last fall.

The plant closed in May and ever since its managing partner, the Municipal Review Committee (MRC), has been trying to find a new managing partner. When it closed down, the MRC made an arrangement to send some of its waste to Juniper Ridge Landfill in Old Town and to PERC.

Even though PERC was getting extra waste from the MRC, it still sought out the overseas plastic because the MRC is closing in on announcing a new partner.

During its annual members meeting Wednesday the MRC announced after months of negotiations and conversations it has narrowed down its process to one bidder.

The first goal of the MRC in 2021 is to finalize a deal with the bidder, who will remain anonymous until the deal is processed, and reopen the Hampden facility.

MRC Executive Director Micael Carroll said during the meeting the plant will be winterized to protect equipment and so when a deal is done the facility can quickly get up and running.

The bidder will also have to pay back a 1.5 million-dollar loan to the MRC after it lent that money to the previous partner.

When both PERC and the Coastal Resources of Maine facility are up and running, Maine's waste industry is stable. The last seven months have been unstable because of the Hampden closure and now the out-of-state waste debate has resurfaced.

RELATED: Message in a bottle brings two Mainers together