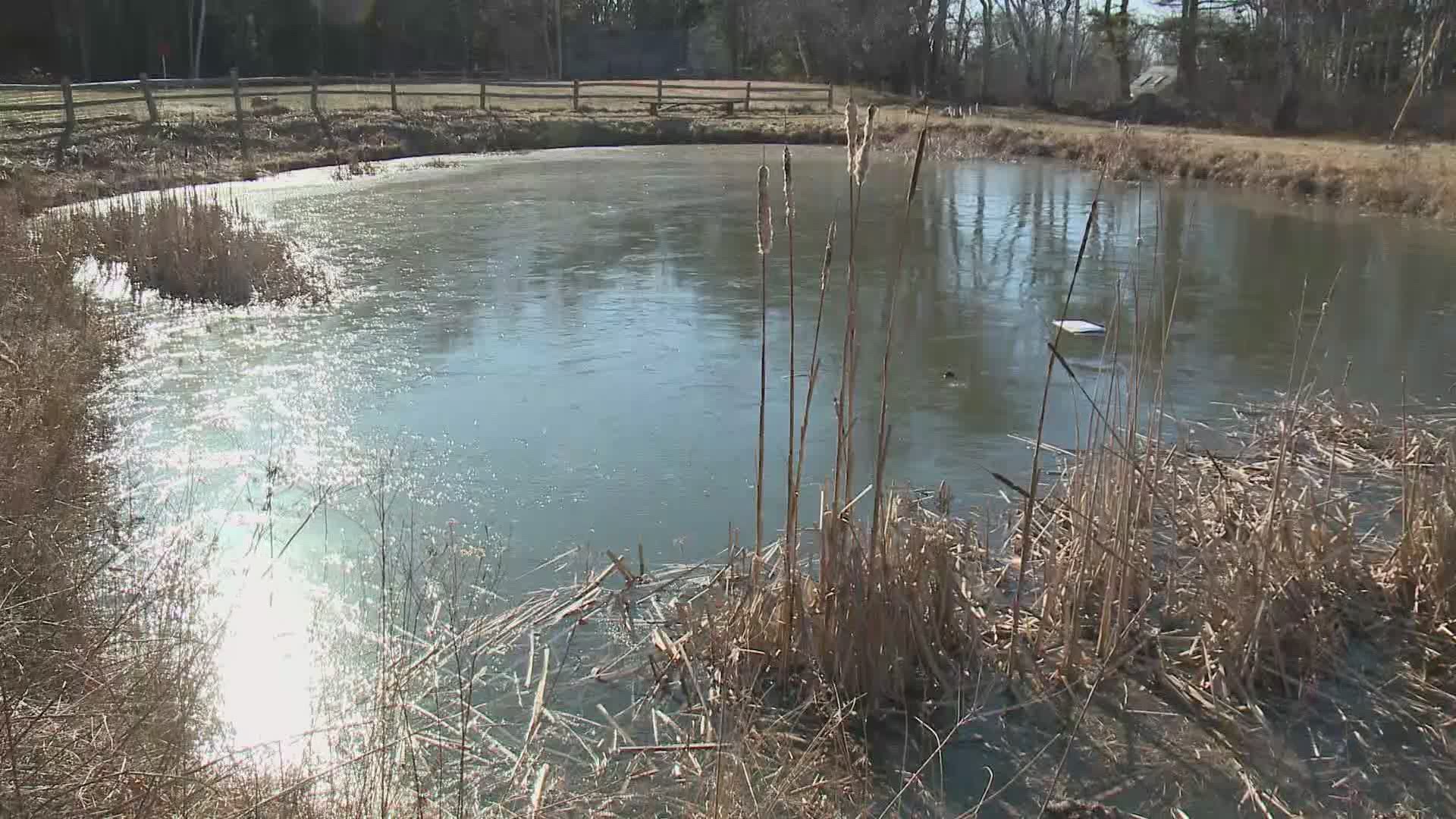 SOUTHPORT, MAINE, Maine — The small pond by the Southport School easy to overlook. It's right beside the sharp curve in the road, with the island’s store and the war memorial on the other side.

But the little pond is getting big attention right now after word began to spread over the weekend that town selectmen planned to fill it in. A group of about 20 parents and children staged a protest on Monday morning, pushing to save the pond, saying it is a treasured spot for natural science and ice skating.

“There is so much life in it, and in wintertime when it freezes we can go ice skating, which is so much fun because we can all be together,” said Jessie Ullo, whose mother Tracy Hall organized the protest.

Hall said she teaches natural science for a local conservation group, and the pond is a favorite classroom.

“Throughout all seasons the pond is used for education," Hall said.

“In May, it's a great time to come here and look for tadpoles. The pond is teeming with life, [it is] one of the best places to take kids to teach them.”

The pond was created 90 years ago as a fire pond—a water source for fighting fires— said Southport Fire Chief and First Selectman Gerry Gamage. He recalls being chief in 1978 and digging out the edges of the pond to help provide fill for a ball field. Gamage said the pond keeps growing in from plants like cattails, and that makes the ice less safe. Now that the town has built a modern water system, the pond is no longer needed for fire protection. Gamage said blasting for a construction project in town is creating fill, so selectmen decided to use it to fill in the pond.

“At this point, we felt it wasn’t a fire pond anymore, and we spend taxpayer dollars to dig it out, (so) it made more sense to fill it in and build an ice rink with six inches of water, which should be reasonably safe,” Gamage said.

But parents say they were caught by surprise when word spread Sunday of the plan to fill the pond in.

“I didn’t understand this decision. It seemed to come out of nowhere,” parent Shawn Griffiths said.

“We’re all working for the town. It's not a personal thing,” Gamage said.

“And we will discuss it. Not an issue. We are your humble servants, we do what you want.”

Tracy Hall and the kids made it clear what they want.

“I think the pond is good because there are so many animals, little creatures that live in it,” said student Lucy Brown.

“I learned to skate here and my brother is younger and I want him to have a chance to learn to skate on the pond,” said another girl.

Gamage said if the town decided to keep the pond, he will have a safety concern because of the growth in the pond making the ice weak. Hall said she believes the money could be raised to provide whatever maintenance is needed.