On the 47th anniversary of landmark Supreme Court decision Roe v. Wade, advocacy groups in Maine and across the country are still heavily divided on abortion. 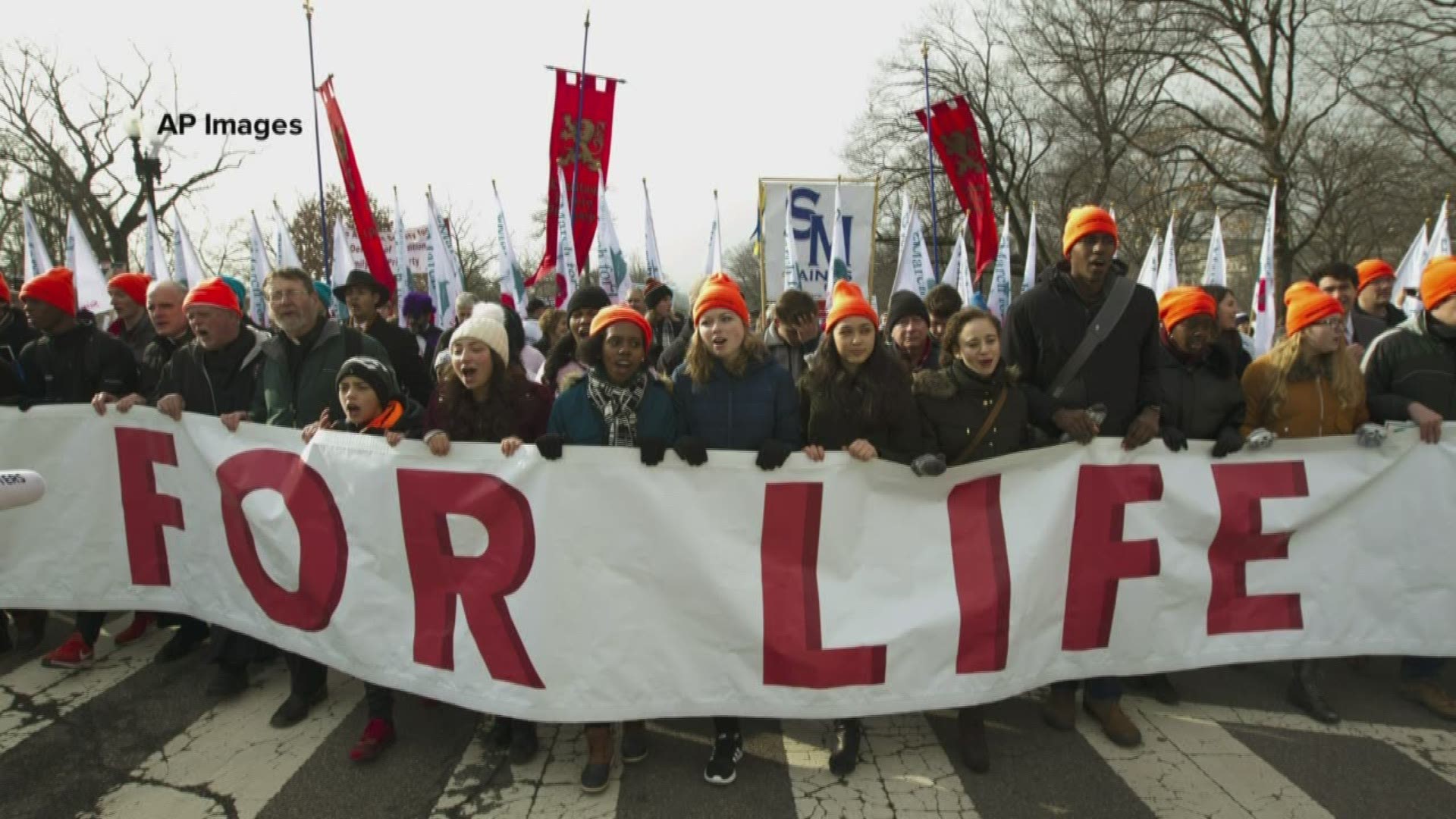 MAINE, USA — On January 22, 1973, the U.S. Supreme Court ruled in a 7-2 decision that a woman’s right to choose an abortion was protected by the privacy rights guaranteed by the Fourteenth Amendment. Forty-seven years later, the divide among pro-life and pro-choice supporters remains widespread, and reproductive rights are still at the forefront of political discourse.

Support for legal abortion is the highest it’s been in decades, according to an NPR/PBS NewsHour/Marist Poll. In 2019, 11 bills supporting abortion and reproductive rights were signed into law—two of those bills were out of Maine.

In a press release Wednesday, Gov. Janet Mills said, “… as Governor, I will always work to ensure that every person has access to sexual and reproductive health care when and where they need it. As we mark this anniversary, let us remain vigilant in defending women’s rights and recommit ourselves to making further progress for reproductive health care in Maine.”

“Maine was one of only nine states that passed laws expanding access to abortion,” Planned Parenthood of Northern New England communications manager Amy Cookson said. “And we passed two, so that’s remarkable.”

The two bills passed in 2019 were LD 820 and LD 1261. With LD 820, Maine now requires public and private health insurance that covers prenatal and maternity care to also cover abortion care. The bill passed with 82 yeas, 59 nays, and 1 excused (9 were absent).

Bill LD 1261 allows a physician assistant or an advanced practice registered nurse licensed as such in Maine to perform abortions, in addition to a licensed allopathic or osteopathic physician.

Susan Johnston of Cape Elizabeth was one of 299 Maine women who testified in Augusta in support of LD 1261. Johnston, now 74, had an abortion before the Roe v. Wade decision­—before abortions or even birth control (for unmarried women) were legal.

Credit: Courtesy Susan Johnston
Susan Johnston, center, stands with the group of women who testified in Augusta for LD 820.

“I was 18 when my world turned upside down,” Johnston said in her testimony. When Johnston got pregnant in 1963 at age 17, her mother shut the door in her face and threw her out, and her boyfriend’s parents assumed they would get married.

“My mother was hysterical,” Johnston told NEWS CENTER Maine. “I thought, I can’t get married, I don’t want to have this baby. I decided I would kill myself and end it all. It was so shameful.” Johnston’s mother finally realized her state of mind and they talked about her fears.

Through a network of mothers and women in Johnston’s neighborhood, they were able to find a doctor in Ashland, Pennsylvania who performed abortions. Johnston said she only recently discovered that Dr. Robert Spencer had become well-known for performing illegal abortions before the Roe v. Wade decision. Historians believe Dr. Spencer performed more than 40,000 safe abortions over the course of his career. There are numerous books and documentaries about him.

“I went through this in a daze,” Johnston said. “I couldn’t even remember until recently.”

Johnston said it all came flooding back to her after hearing another woman’s story who also went to Dr. Spencer for help.

“I realized that telling my story is really important. People don’t realize this could happen again.”

Despite support for reproductive rights being high Maine and across the U.S., the divide remains prevalent. Nine states passed laws in 2019 that restrict abortion rights, the most restrictive being Alabama’s near-total abortion ban. Alabama’s law bans abortions, with no exceptions for rape or incest, and makes it a felony for Alabama doctors to perform or attempt to perform an abortion.

"A lot has changed since the enactment of Roe v. Wade 47 years ago,” Karen Vachon, executive director of Maine Right to Life, said in a statement on Wednesday. “We continue to hold out hope that someday legal abortion will be a thing of our country’s deep, dark, and regrettable past – right along with slavery."

On Friday, pro-life Mainers will travel to Washington, D.C. for the annual 2020 March for Life pilgrimage, sponsored by the Catholic Diocese of Portland’s Office of Lifelong Faith Formation.

Katie Donlon of Saco, who is a senior in high school, will be going on the pilgrimage to D.C. on Friday for her second year. Katie is one of seven children in her family and said a big reason she’s so passionate about being pro-life is because in her family, life is celebrated.

"I'm very much afraid to be open about my [pro-life] views just because I've been turned down before,” Katie said. “People saying ‘you don't have an opinion in that matter. That's not you, that's not about you.' I'm speaking for the person who can't speak."

“I think it is fair to say that these young people participate in the March for Life convinced of the value of each human life and wanting through their witness to help others to try to come to appreciate and treasure the gift which is life,” Bishop Robert P. Deeley said in a statement. “It is heartening to know that statistics seem to indicate that the number of abortions in Maine is declining, but we continue our advocacy in the hope that we will find a way for all in our society to embrace an ethic which values all human life, from conception to natural death.”

The Diocese of Portland is also joining Catholics across the country in 9 Days for Life, which began on Tuesday. According to a press release, 9 Days for Life is “an opportunity for recollection and reparation in observation of the anniversary of Roe v. Wade.”

On Wednesday, President Donald Trump announced that Jan. 22, the anniversary of Roe v. Wade, will become National Sanctity of Human Life Day. "...as President, I will continue to fight to protect the lives of the unborn," Pres. Trump said in a White House statement.

Supporters and non-supporters alike are eagerly waiting for March, when the U.S. Supreme Court will hear its first abortion case since Justice Brett Kavanaugh was appointed. His predecessor, Anthony Kennedy, had been the swing vote in abortion cases. The case will challenge a Louisiana law that requires doctors who perform abortions to have admitting privileges at a nearby hospital.

The Louisiana case could overturn or weaken Roe v. Wade, which the Supreme Court could do as early as June.

When asked about how Johnston felt now, 47 years after the Roe v. Wade decision, she said, “Some days I feel optimistic, but most days I don’t. Things are so dangerous, with Kavanaugh. So many states have passed so many laws to try to overturn Roe. We’ve gotten complacent.”

One thing Johnston did feel optimistic about is the way she’s able to talk to women and Mainers about her story, even people who don’t share her views.

“In Maine, we’re actually listening to each other which is so absent in national politics,” she said. “Even if they don’t agree with me, there’s respect.”

RELATED: Thousands gather for Women's March rallies across the US