Dolly Pawton and Aura help their owners in different ways; both Maine dogs are being honored for their service work. 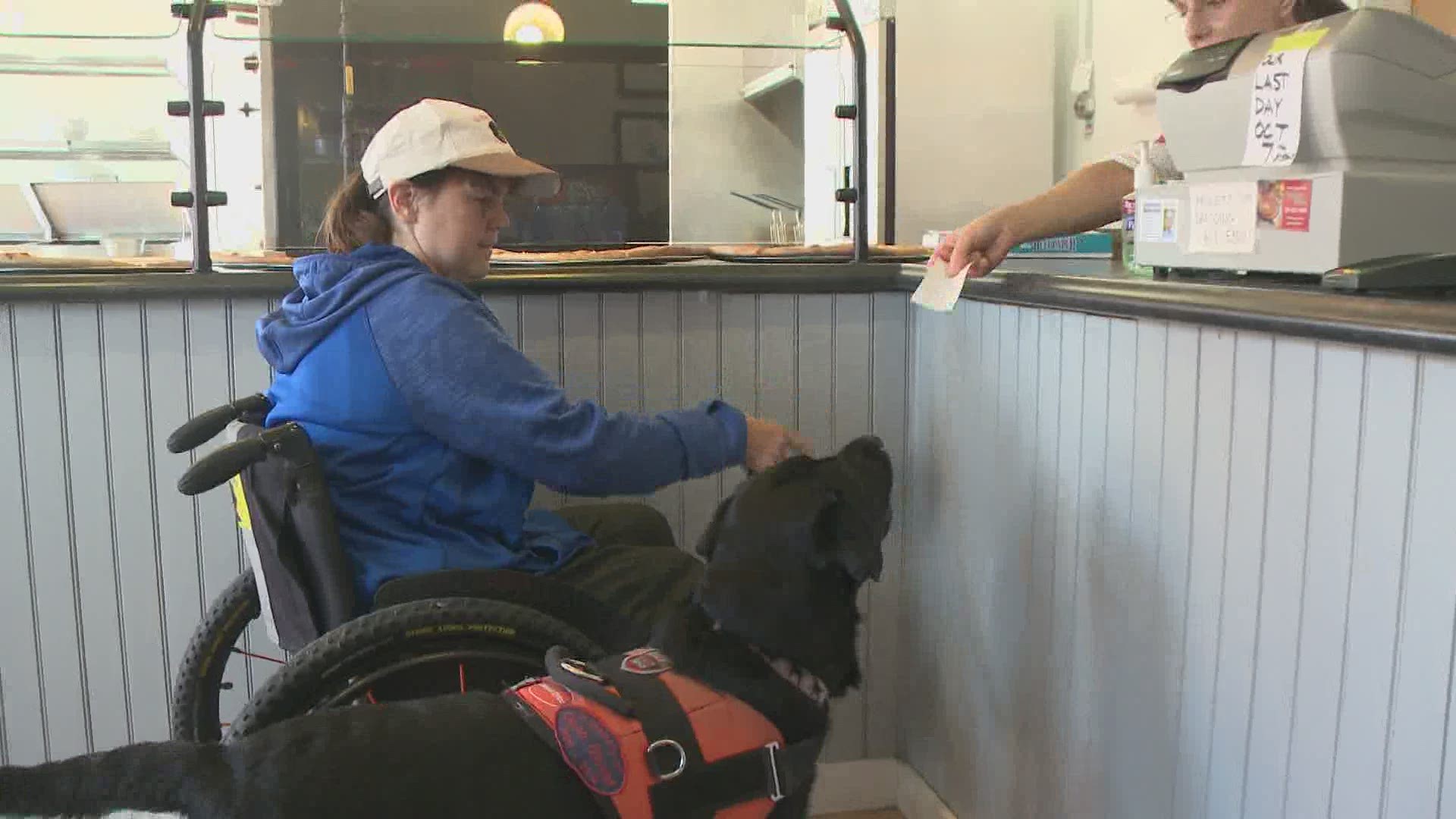 Dolly works as a cardiac alert dog for her owner Amy Sherwood, who is restricted to a wheelchair because of multiple illnesses. The black lab alerts Amy if her blood pressure drops too low or her heart rate rises to an unsafe level.

Dolly is trained to press a certain button that calls 911 if Sherwood were to pass out at home. If they are out in public, she knows how to find someone for help. Dolly has had to use her skills multiple times as Sherwood travels for public speaking engagements.

While this is Dolly's most important job, the 4-year-old black lab has other talents. She opens doors, pulls packages into the house, helps to do the laundry, pulls Amy's wheelchair, will pay for items in stores, and even works as crowd control in case people are getting too close and making her owner uncomfortable.

Sherwood says, "Dolly is my friend, my partner, and my medical equipment with a loving beating heart. She has changed my life completely. I don't know what I would do without her." Dolly inspired Sherwood to write two children's books, Pawsibly the Best Medicine and Emotional Support is Ruff.

Sherwood trained Dolly herself by taking her to casinos and arcades to teach her how to press buttons, and to acclimate her to crowds and distractions in public.

It's not all work and no play for Dolly, the black lab spends her time off-leash dock diving. She has competed twice in the DockDogs World Championships. While dock diving is a favorite pastime, Dolly loves any activity involving water.

Retired Army Command Sergeant Gretchen Evans was connected with her dog Aura in 2015. Aura helps Evans maintain a sense of normalcy and safety after losing her hearing. "I became deaf when I was 46," explains Evans. "I was injured in Afghanistan from a rocket blast... I got Aura through America's VetDogs, which provides veterans of all branches service dogs to mitigate their disabilities, regardless of what they are."

Credit: Gretchen Evans
Aura at "She Went To War"

Evans says Aura was the first hearing service dog VetDogs trained, so there was a learning curve, but Aura has taken to it easily. "If you come to my door and ring the doorbell or knock I won't hear that," Evans says. "I miss a lot of nice people and UPS packages, so when she hears a sound she comes to me and she nudges me with her nose on my leg and then my command to her is, 'Where is the sound?' And she takes me wherever the sound is."

"She also does nightmare interruption. Like a lot of veterans, when we come back from war we have nightmares and it's not good to stay in those nightmares; they wear you out and you don't sleep well and you're replaying that trauma in your head over and over again. It's just really disturbing. So now, when I have a nightmare and I make any sudden movements or I might vocally yell out, Aura will pull the blanket off of me," Evans says if all else fails, the 70-pound lab will jump into bed and lie down on top of her to wake her up from those nightmares.

Aura stays busy, traveling the country with Evans to her public speaking engagements, which Sherwood also does with Dolly in local schools. Whether these two Maine dogs make it all the way, or not - the competition helps to highlight the work both Evans and Sherwood have put into their hero dogs, and what they've gotten in return.

Credit: Gretchen Evans
Aura at the "Dogs on the Catwalk Fashion Show"

"What I want people to know is how they change your lives. They restore something in us that's been taken through trauma or through a disability that maybe you're born with. They mitigate those things that keep you from being whole," says Evans. "I just wanted to acknowledge her service to me in someway."

You can vote in The American Humane Hero Dog Awards until July 16.

RELATED: 'She's always there' | Louisville service dog gets her own yearbook photo