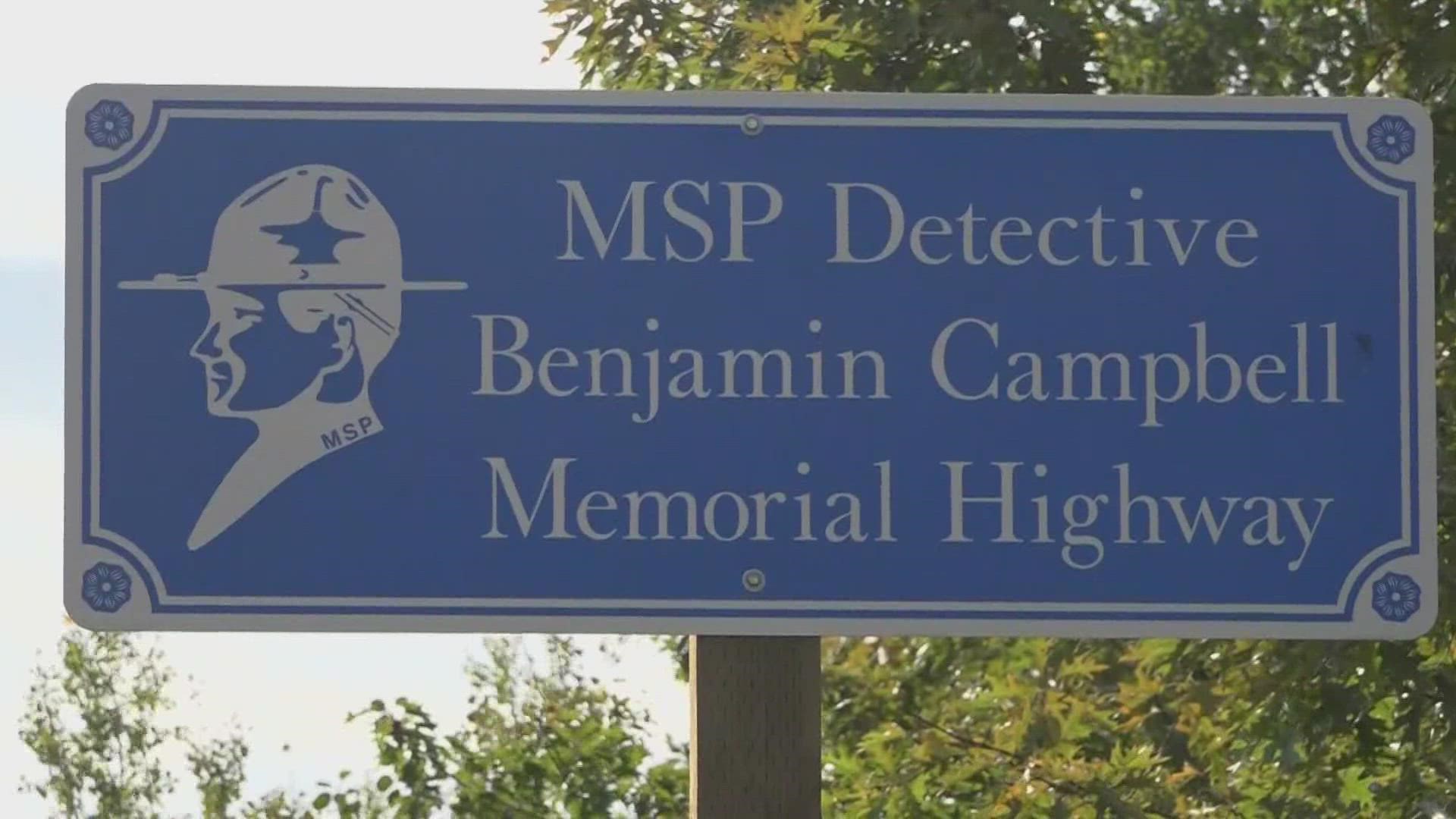 HAMPDEN, Maine — An emotional ceremony was held Friday in Hampden to remember a Maine State Police detective killed in 2019.

Family, friends, and coworkers of Detective Benjamin Campbell turned out on Rt. 202 in Hampden to unveil and dedicate his memorial sign.

Organizers said this sign is number nine of 12 signs honoring fallen Maine State Police troopers around the state which also dedicates one mile of the roadway of each fallen officer’s patrol area.

Campbell's wife Hillary and son Everett, who was dressed in a police uniform, were there along with a number of other law enforcement officers to honor him.

Timothy Culbert with the Maine Retired Troopers Organization said these events mean a lot to the families.

"It means everything to them," he said. "We always say they're never forgotten. Now, we have something tangible and physical that they can see and the public can see to remind them that is true, the troopers that gave their lives are not forgotten."

Back in June, Governor Janet Mills signed into law a bill that dedicated one mile of Maine’s secondary roadways to each trooper who dies or has died in the line of duty.

“With the signing of this bill into law, we’re paying our respects to the 12 Maine State Troopers we’ve lost in the 100 years of the force’s existence, and to any troopers, we may sadly lose in the future,” Senator Bill Diamond, the bill’s sponsor, said. “Recognizing these fallen heroes on the roads they patrolled and in the communities they served is such a meaningful statement.

Maine State Police Lieutenant Michael Johnson said, "Detective Campbell is always going to live on in our hearts and in our memories in terms of the sacrifice he made and that goes for all of our troopers but I think the sign is important for those people so they don’t forget and there’s a visible reminder of the sacrifice that he made and the sacrifice that all of our troopers make and frankly all law enforcement makes going out there and serving and protecting the public and the residents of our state."

Organizers said the memorial sign plan was signed by Governor Mills in June and by the end of next week, all 12 signs will be dedicated and in place.

An emotional ceremony today on Rt 202 in Hampden as a sign was unveiled in memory of Detective Ben Campbell who was killed in 2019. Ben's wife and son were there along with a number of law enforcement officers to dedicate the new memorial sign. @newscentermaine @MEStatePolice pic.twitter.com/LwO3jn9ZFd

Houlton, Route 1 Beginning at the Littleton-Houlton town line and extending south one mile

Millinocket, Route 11 Beginning at the intersection of the Golden Rd and extending south one mile

Mattawamkeag, Route 2 Beginning at the intersection of Route 157 and extending north for one mile