At age 94, Bob Eaton has vivid memories of his years in the service during and after WW2. 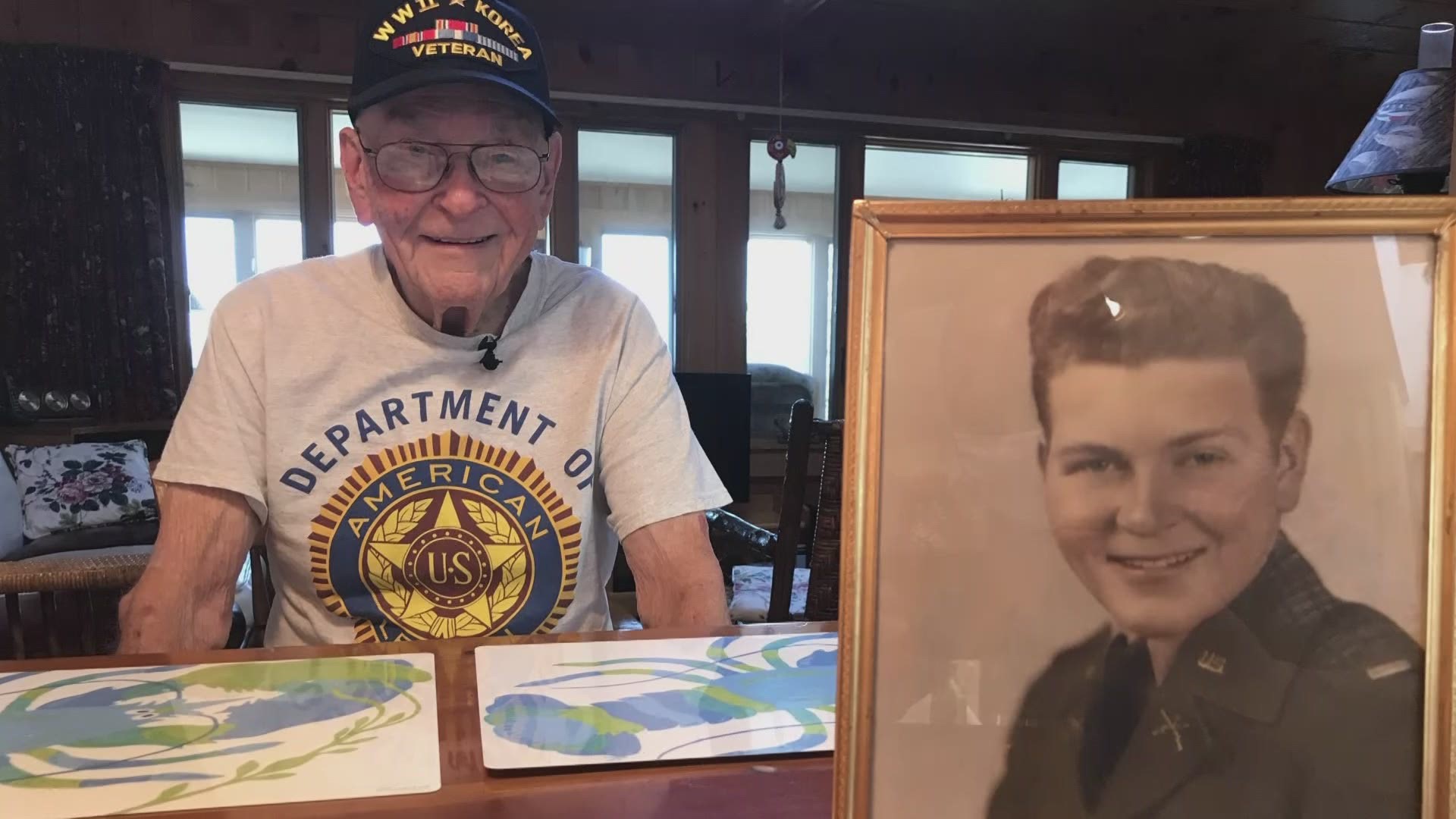 "It’s a little cluttered, ‘cause I didn’t know you’d be taking pictures,” he explains.

The shop looks like a place where Bob stays busy, which it is. But it's also a place where he catches memories of the old days, with a radio tuned to a station he says plays “World War II music."

Bob knows that music well. At age 94, he has vivid memories of his years in the service during and after WW2.

“I was drafted,” he said. But then tells the full story of his summons to the draft board as he graduated from high school in Massachusetts in 1943.

“And they said, 'you want to be in the Navy or the Army?' And I chose Navy, and went back and said, 'I’m all set.' Then I went back in and they said, 'sorry, Navy is all filled up.' Boom! Army, just like that."

It was the first of many surprises the Army had in store. Bob trained for Artillery for most of a year, he says, but then he and a buddy decided they should try to become officers. There was no need for artillery officers at the time, so Bob says they decided to go for the Infantry.

He graduated from infantry officer school as a Second Lieutenant in July, 1945. The war in Europe was over. But the Pacific war was still on, and Bob says he, like many others, was worried.

“I’m lucky to be alive because our class was slated to invade Japan and there would not have been any second lieutenants left.”

Then a second Army surprise—Bob was sent to Germany to be part of the post-war occupation force. An assignment that he said was far less danger, although some young German soldiers were still making trouble, despite the surrender.

"I’ve got pictures of my Jeep, with angle iron above,” he says, showing the photo of a piece of steel welded to the front bumper of the Jeep, sticking straight up four or five feet with a hook cut into it.

“Because we went around in Jeeps with the windshield down…(and the Germans) they strung piano wire across the road, cut your head off.”

Bob ended up being responsible for supplying and feeding more than 1,500 soldiers and civilians at a base, a task he described as “stressful."

After two years, Bob was home, out of the service, studying for a forestry degree at the University of Maine. Until another surprise: the Korean War had broken out, and the Army summoned him again.

“So back in the service I went. By that time, I was married.”

It was a common complaint, as thousands of veterans of World War Two were recalled to military service for the Korean conflict.

Bob says he and his young wife worried his infantry unit would be sent to the front lines.

But at the last minute Bob got his orders, and the Army had one more happy surprise.

So, thanks to the Army, Bob spent the Korean War in relative safety, guarding shipping in the Panama canal.

With that second tour of duty done, Bob came back to Maine, joined the Maine National Guard for several years as he and his wife started a family and Bob launched his career, first detecting and investigating natural gas leaks and later managing an investigation business doing background and other checks on people.

He retired in 1985, and has spent time in his home on the island of Southport, where his family would spend summers during Bob’s boyhood.

He credits his years in the Army with helping him in life, and says all young people should have the opportunity of some kind of military or similar public service experience, to help them build character and self-discipline.

The war and Army years, of course, are long past. Bob will turn 95 in January. But those memories are still crisp and clear.

“I started out, and was an enlisted man for a year. I had a different serial number, 31432389 is my serial number for enlisted man, and 001337284 is my officer’s number. Two numbers," Bob says proudly, as he reels the numbers off all these years later.

Asked how he can recall the ID numbers he hasn’t used for close to 70 years, the answer is simple.

"You never forget them,” Bob says, and laughs.

Then for good measure, repeats one, with a smile, just because he can.