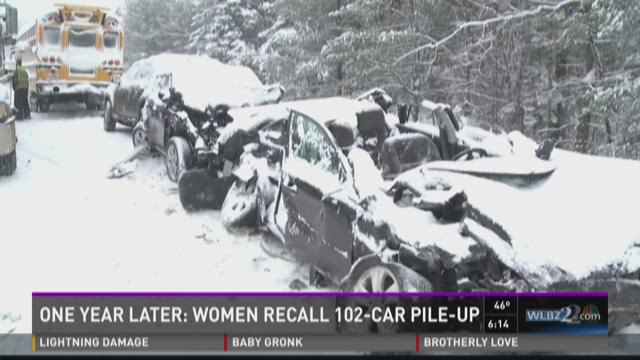 CARMEL, Maine (NEWS CENTER) -- It's been one year since the massive pile-up of cars and trucks took place on I-95 in Carmel, Maine. 102 vehicles mangled and heaped over one another, involving 149 people. No one died in the pile-up, but there were several injuries.

Breanna Brown, who was a passenger in one of the vehicles involved, remembers that frightful day. "If you ever crunched a can, it was that loud, just magnified in your ears and just a lot of pain, all at once."

"My bottom was in the passenger seat, the roof of the vehicle was touching the console, and I was wrapped around it, holding onto the steering wheel," she said.

Brown spent months going to physical therapy, but she is still in pain every day. "I still have a slight limp that I'm constantly trying to correct. I have a lot of numbness and just a lot of general pain in my back and hip area," she said.

Despite all the pain, she climbed on her motorcycle this past summer. "I just wanted to prove to myself that I was still me. I could still enjoy the things that I love. Even though my life has changed, I can still hold on to things that are important to me," said Brown.

Everyone who was involved in the accident or saw videos of it was shocked that everyone made it out safely. And in a strange twist, the massive accident may have saved a life.

"When my stepfather took hit CT-scan, they found a cancerous tumor on his kidney. We might not have known until it was affecting his health seriously and maybe we couldn't rewind the clock at that point," said Brown.

Peggy Leonard was another woman involved in the accident.

"I literally slalomed in my car through six cars and I hit a side rail," she said.

That's when a tractor trailer plowed into her Volkswagen, sending her spinning. When she looked up, another tractor trailer was heading right for her. "Some voice inside said to throw it in reverse. I just turned it a little, so it split my car open instead of hitting me head on. That little move probably saved me from very serious injury or possibly saved my life," said Leonard.

Leonard suffered injuries to her hip and shoulder.

It's been one year, and both Brown and Leonard said their lives have changed. "Because I had such a close call with my life, you have to live your life and do the things you want to do. You have to live for now," said Leonard.

"I can't stay mad at someone for a long time. I can't leave the house without telling people I love them. It's eye-opening when a near-death experience happens and you realize, 'wow, I do have an expiration date and it might be sooner than I thought'," said Brown.

There is a GoFundMe page for Breanna Brown to help pay for medical bills, associated with last year's pile-up.

According to state police, there were a number of factors that caused the pile-up. After a lengthy investigation, they said speed, road conditions and weather conditions contributed to the crash.