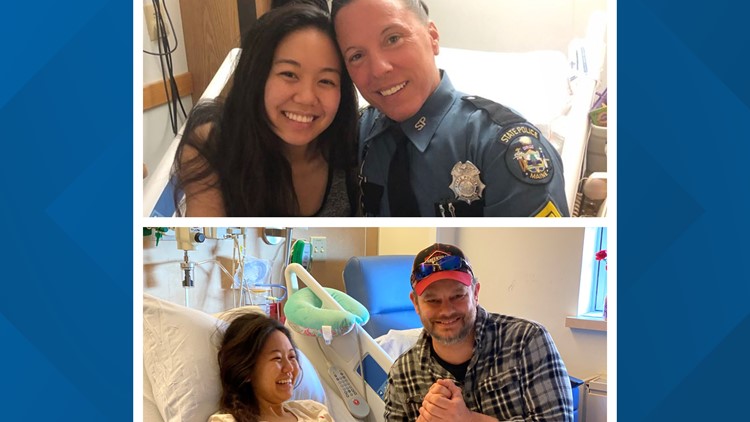 According to Maine State Police, Emily Thur was seriously injured after she lost control of her car in Sidney on December 23, 2019.

She is forever grateful to passerby John Kay and responding police officer Cpl. Diane Vance for the comfort and aid they gave her.

“To be honest, I’m not sure what made me stop. I think maybe just human nature. We all have it, it’s just a matter of whether or not you act on it,” said Kay in an email. “If you see that someone needs help, it really shouldn’t be a question. The events of that night will stay with me forever. Emily was in the vehicle in front of me when her accident occurred, there is no way I could have just continued down the road. For this, I am forever grateful.”

Sadly, Kay was on his way to the emergency vet where he had to put down his family dog.

“But now we have a new friend from the outcome,” he said. “Emily will hopefully always be a part of our life.”

Maine State Police say Cpl. Vance had to provide first aid, including a tourniquet, staying with Emily and holding her hand during the ordeal. Thu was flown by LifeFlight to Lewiston.

Thu requested a visit so she could thank Cpl. Vance in person. Vance helped connect Emily with Kay.

Kay and his wife have also been to visit Emily while she was in the hospital.

“[Kay’s] Presence kept me strong until responders arrived. I have developed a strong bond with John and his wife Lulu, and Cpl. Vance,” Thu said in an email. “This may seem like an ordeal to some, but it introduced me to some of the kindest people, and I am forever thankful for that.”

Thu was recently released from the hospital according to Maine State Police.

Here are some other stories that are trending on News Center Maine.