It's fiddlehead season in Maine, and UMaine agriculture expert David Fuller is sharing some harvesting reminders 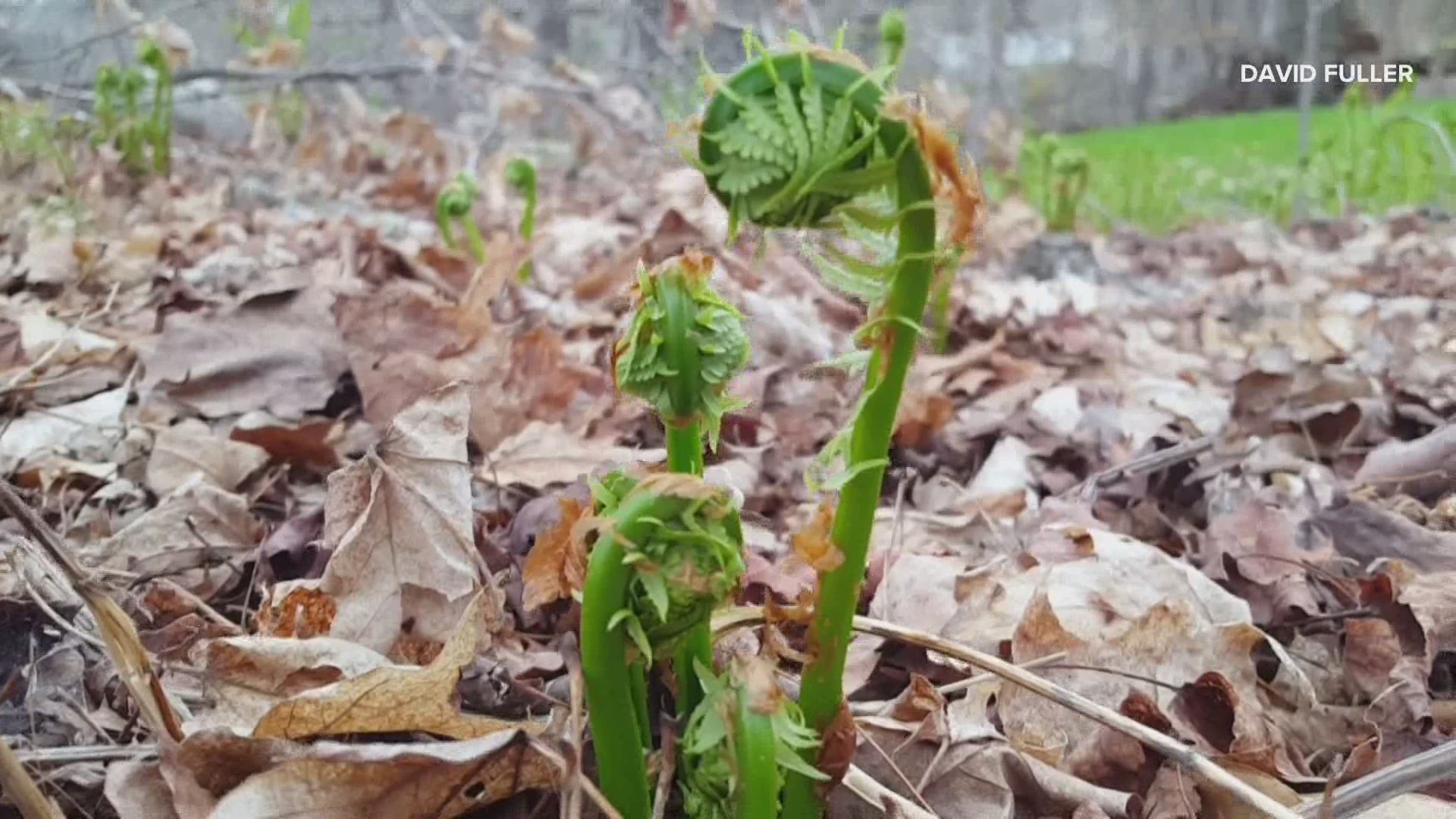 MAINE, Maine — It's that time of year when many Mainers harvest a spring-time delicacy -- fiddleheads!

You can enjoy fiddleheads as a side, sauteed, fried, in salads, as a soup, on top of pizzas, on your breakfast omelet, and many other ways!

David Fuller is an agriculture and non-timber forest product expert with the University of Maine Cooperative Extension. He says with the daffodile flowers up, that's a pretty good indicator that Fiddleheads are also starting to grow.

‘Tis the season...for fiddleheads!@UMaine's agriculture expert David Fuller has some reminders of when and how to harvest, how to cook and wash properly, and of course... how to make yummy dishes with them!

Fuller says fiddlehead season this year seems to be right on time. "They are coming up just when they should, which means around Farmington early in May and about now, they are starting to pop up!" In northern Aroostook county, it may be the first week of June before they are gone up there.

Some fiddleheads are not edible, but "ostrich fern fiddleheads" are edible.

"Typically, you would harvest those when they are up about 2 to 4 inches tall and the fiddlehead itself is tightly coiled; it hasn't started to unfurl," says Fuller.

Fuller recommends not to clean them with the river water when you pick them. Instead, he suggests you wash them thoroughly at home with cold water. "Typically, the parchment light covering, comes off them at that point, rinse them three to five times and then they are good to cook," added Fuller.

Ostrich fern fiddleheads will keep for about a week in the fridge.

Research by the UMaine Cooperative Extension shows that each plant, called a crown, should be no more than "half harvested" at one time.

"If it has fewer than three fiddleheads, or if the fiddleheads are very small like the size of a nickel, you should pass up on those," says Fuller. "Or if the crown has already been harvested, don't cut any more fiddleheads from that crown."

Fuller explains, if you harvest all the Fiddleheads, usually, in about three years, the whole plant will die because it doesn't have enough energy.

You won't find ostrich fern fiddleheads in swamps, but rather beside rivers and stream beds. "They are not standing water, they stand along alluvial flood plains," said Fuller.

"Boiling for 15 minutes, and that means putting them loosely in a pot of boiling water, bring it back to boil, then start your timer for 15 minutes, and then steaming not too many in the pot, don't cram em in there, for 10 to 12 minutes. Then, if you want to use them in the stir fry, toss them in at the end, if you want to put them on a pizza, that's ok...after they've been cooked!" said Fuller.

Fuller says the biggest challenge ostrich fern fiddleheads are facing is overharvesting by people, and sometimes invasive plants, like knotweed.

Last but not least, he says to remember to always ask permission from landowners when harvesting fiddleheads. "It is illegal to harvest any kind of plant material from someone's property without permission," said Fuller.

Here is a publication on fiddleheads with more information.

This is a publication by the UMaine cooperative extension with more facts on fiddleheads.