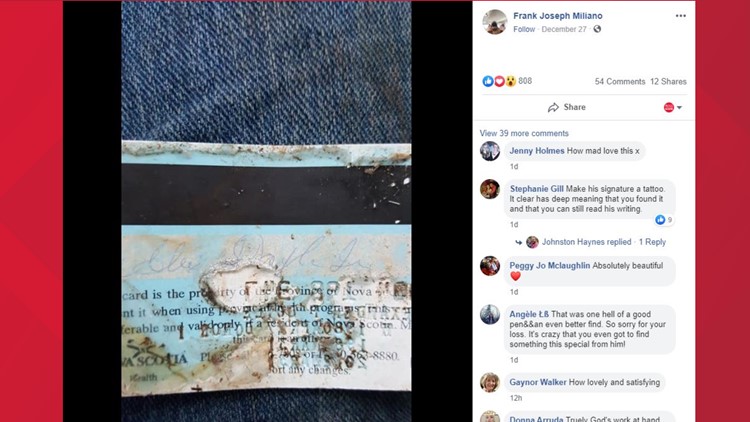 PLEASANT POINT, Maine — A Maine man took to Facebook on Thursday to tell an emotional story about a twist of fate that occurred while he was out dragging for sea urchins.

Frank Miliano said he and his crew usually just pick a spot and drag until they reach their quota. But on Thursday, Dec. 27, they decided to scout around and try different spots off Pleasant Point.

Miliano said he emptied his final tray of the day and dragged up his brother Alex's health care card. The thing is, according to Miliano, Alex died 11 years ago in those same waters.

Miliano compared the chances of choosing to fish that spot and dragging up the healthcare card to the chances of winning the lottery. He said Alex's signature is still visible on the card.

As for why the card is from Nova Scotia, Miliano said Alex was raised in Canada. He said Alex had come to visit 11 years ago and died. The details of his death are unclear but Miliano said Alex's body was found in the water three days after his death.

Miliano also said a lot of people think the story is a joke or that he's making it up. He wants to make it clear that it isn't fake and that he didn't intend for his Facebook post to go viral.

NEWS CENTER Maine is working to get more information from Frank Miliano on the discovery.