Around 400-plus lobstermen gathered at the Augusta Civic Center on Wednesday to voice their anger about the proposed development of offshore wind power. 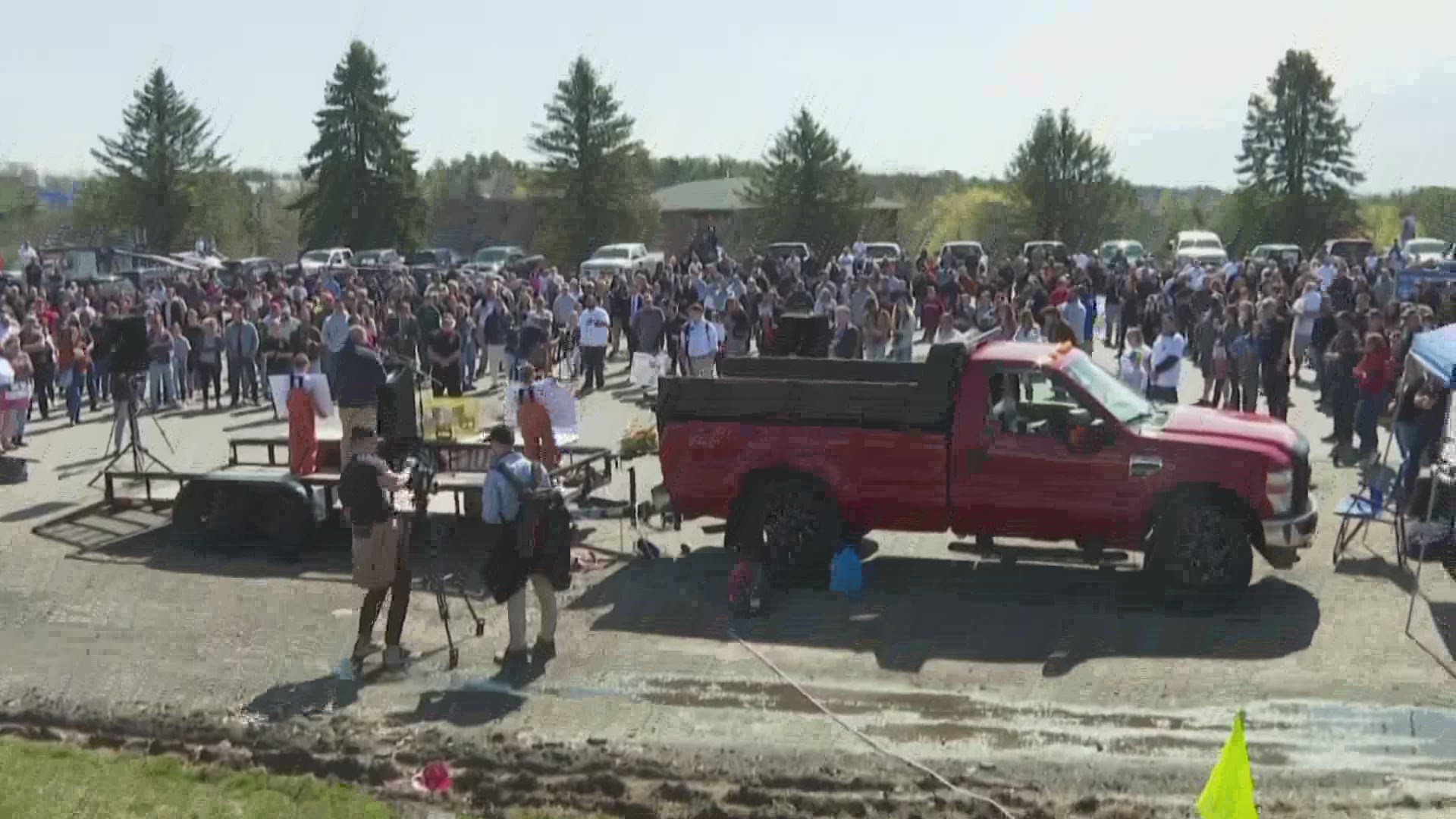 AUGUSTA, Maine — The Maine Legislature is about to see a battle over offshore wind power in the Gulf of Maine, two high-profile combatants: Governor Janet Mills facing off against Maine’s lobster industry.

An estimated 400 lobstermen or more left the docks for a rally Wednesday outside the Augusta Civic Center, where the Legislature was meeting, to voice their anger about the proposed development of offshore wind power.

Like South Bristol fisherman Adam Gamage, they say that development is a threat.

“Here we are, we have a very sustainable fishery,” Gamage said, “It's too bad it's come to this where they are trying to put an industrialized piece of machinery out in the middle of the ocean (and) they don’t really know what is going to do.”

There is currently a plan by New England Aqua Ventus to build one very large, floating platform with a massive wind turbine mounted on top. It would be located a little more than two miles off Monhegan Island in a site approved by the Maine Legislature more than 10 years ago for that purpose.

The project is designed as a full-size test of a floating platform design from the University of Maine, but also to test how large wind turbines perform in the moving and often harsh environment of the open sea.

Governor Janet Mills, a strong supporter of offshore wind power as a source of renewable energy to address climate change, has also proposed a site farther offshore for a “research array” of multiple floating wind platforms. The combination of those proposals has fishermen worried their livelihoods are at risk from the unknown effects of large wind turbines on marine life.

Rep. Billy Bob Faulkingham (R-Winter Harbor), who is also a lobsterman, is sponsoring a bill in the Legislature to block all offshore wind development.

“I fully support green energy, I’m a huge advocate for green energy, and all on board with carbon-free energy. But these windmills on the ocean are anything but green, and a terrible idea for Marine,” he said.

Faulkuingham said the heavy use of concrete, metal, and fiberglass to make the platform and turbine—which he said will weigh 10,000 tons—all require significant use of energy and resources.

Other fishermen talk about the possible impacts on marine life from vibrations and sonic effects, as well as disruption of the seafloor from digging the trench for underwater cables.

“We have so many questions and they don’t have answers. We want to keep our Gulf sustainable for future generations,” said Virginia Olson of Stonington, who organized the rally.

Governor Mills responded to the rally before it began, by announcing she is also asking the Legislature to pass a bill, which would enforce a 10-year moratorium on offshore wind development inside the state’s three-mile limit, often called state waters. Mills had previously announced an executive order to do the same thing but is now asking Legislators to make it a law.

The Governor’s written statement said those state waters are where 75 percent of lobsters are caught.

Gerry Cushman, a lobsterman from Port Clyde and a leading critic of offshore wind power, said any restriction on development is a help, but also challenged the Governor’s claim, saying in recent years an increasing number of lobsters are being caught farther offshore, closer to areas where the wind platforms could be located.

The issue will apparently come to a head in the next few weeks as both proposals will face public hearings and votes in the Legislature.