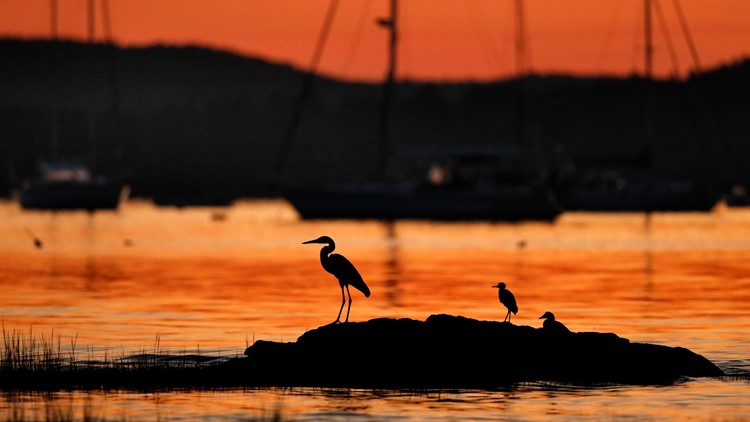 Photo by: AP Photo/Robert F. Bukaty
A great blue heron, from left, snowy egret and an eddies duck share a rock at dawn on the Harraseeket River, Friday, July 20, 2018, in Freeport, Maine.

Maine is this year's 32nd "best state" in the nation, down 10 spots from its 2018 position in U.S. News & World Report's annual Best States rankings.

The state was previously ranked 18th overall in 2017.

Crime & Corrections, the category in which Maine has performed best the last two years, having ranked first in 2018 and runner-up in 2017, remained top-three. Neighbors New Hampshire and Vermont were one and two.

Maine's worst category, Infrastructure, was one position higher than last year, yet stood as its weakest pillar for a consecutive year at 42nd among all U.S. states. Only Pennsylvania, Massachusetts, Mississippi, Connecticut, Arkansas, Louisiana, Rhode Island and West Virginia fared lower.

Maine's second weakest category, Economy, is the same as last year at No. 37, maintaining a five-spot improvement from 2017.

Maine got No. 39 in Natural Environment, a new measure to the 2019 ranks that looks at air and water qualities, as well as pollution and toxin exposure.

U.S. News' overall scores are based on different weights among the eight main categories, comprised of more than 60 subcategories.

Health Care and Education are each 16% of the score, Economy is 14%, Infrastructure and Opportunity are each 13%, Fiscal Stability is 11%, Crime & Corrections is 10% and Natural Environment is 8%.