You can watch replays of the live stream of Portland and Bangor's fireworks. 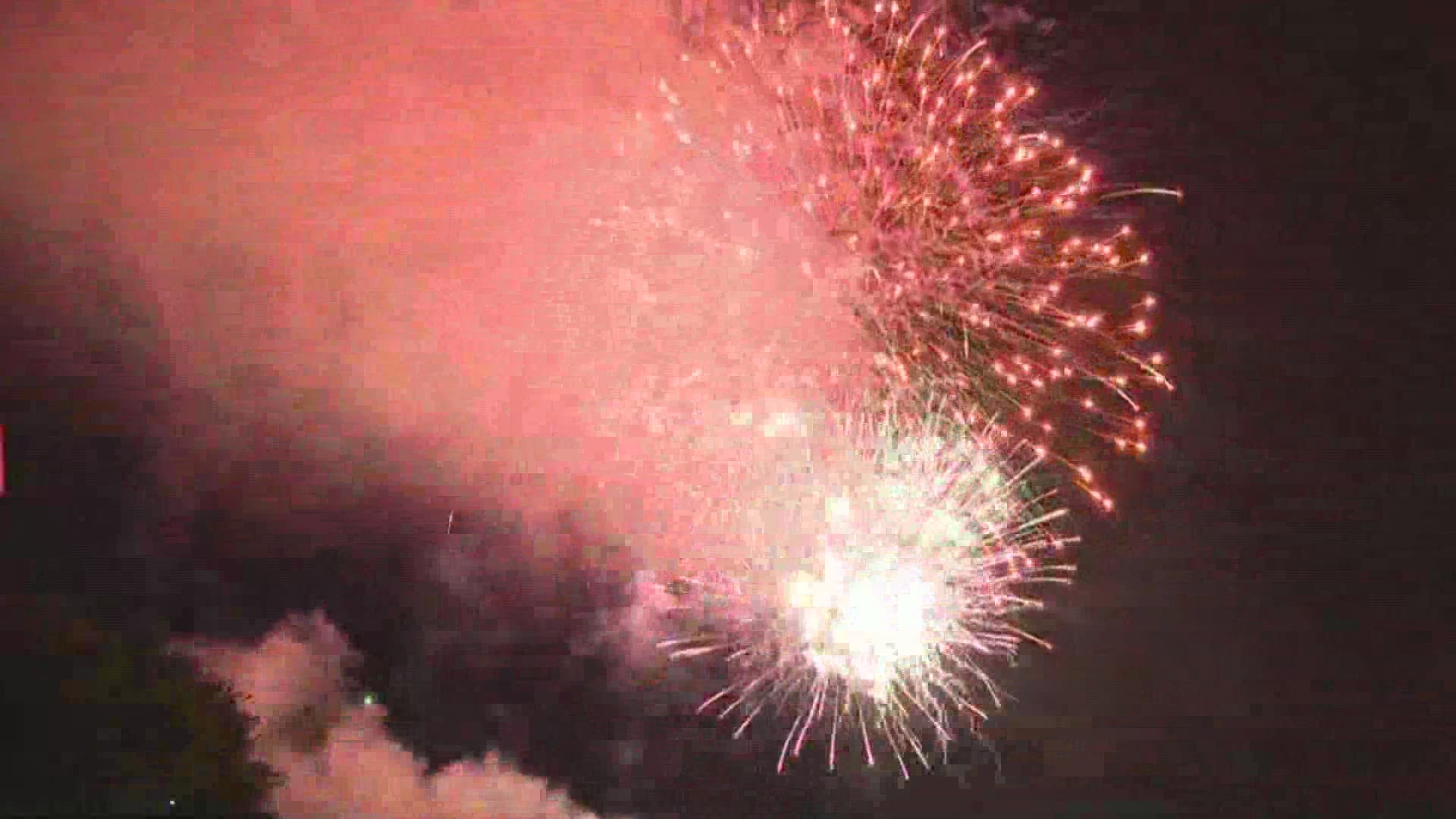 MAINE, USA — Editor's note: NEWS CENTER Maine is happy to partner with the City of Portland to live stream the 2021 Portland fireworks. We simultaneously streamed Bangor's fireworks as well.

After a year of canceled festivities due to the coronavirus pandemic, Independence Day celebrations are coming back with a bang across Maine.

Here is a running list of where you can catch Fourth of July fireworks and other events.

Fireworks: A City of Portland spokesperson told NEWS CENTER Maine the city will hold a fireworks display this year, but there won't be any accompanying events. The fireworks will go off around 9:15 p.m. from the Eastern Promenade. The rain date is Monday, July 5.

Parade: The Fourth of July parade will start at 4 p.m. on Capitol Street and will end at Old Fort Western.

Family activities: There will be live music, food, drinks, and activities at Mill Park from 5-8 p.m.

Fireworks: Fireworks will start at 9:15 p.m. The city of Augusta says the best place to see the display will be from Mill Park.

Fireworks: A City of Portland spokesperson told NEWS CENTER Maine the city will hold a fireworks display this year, but there won't be any accompanying events. The fireworks will go off around 9:15 p.m. from the Eastern Promenade. The rain date is Monday, July 5.

40th Annual Walter Hunt Memorial 3-K Race: Participants are encouraged to sign up early, as space will be limited to the first 200 runners. Registration will be online only and there will be no registration on the day of the race.

Parade: The annual parade has been canceled due to rain.

Fireworks: The fireworks display over the Penobscot River in Bangor will start at 9:30 p.m.

RELATED: 4th of July festivities coming back to Bangor

The annual 4th of July Parade, organized by the Greater Bangor 4th of July Corporation, will begin at 10am on Sunday-...

Fireworks: The fireworks display rescheduled for Monday, July 5th at approximately 9:15 p.m. due to rain.

Parade: The parade, put on by the Bar Harbor Chamber of Commerce, will start at 11 a.m. and go through downtown. Click here for the parade route.

Fireworks: The fireworks display over Frechman Bay will start at approximately 9:15 p.m.

Fireworks: Fourth celebrations will get started a few days early in Boothbay Harbor. As part of Boothbay Harbor's Windjammer Days, fireworks are planned for Wednesday, June 30 at 9 p.m. If the weather is bad, fireworks will be postponed to the following next best night.

Fireworks: The town of Naples will be celebrating with a fireworks display over Long Lake in Naples. The Cumberland County Sheriff’s Office will be closing the Naples Causeway to all vehicular traffic from 9:20 p.m. to 10 p.m. The fireworks are expected to start at roughly 9:15 p.m.

You still have time to get those floats, bikes, golf carts, antique cars in the Naples 4th Parade. You decide how you...

Live music: The Central Maine 4th of July Celebration at the Clinton Fairgrounds will feature live music all day starting at 10 a.m. Organizers say there will be a parade, fair food, a horse show, and more.

Fireworks: The day-long festivities at the fairgrounds will end with a fireworks display at 9:15 p.m.

There will be Independence Day festivities in Eastport this year, including a parade, fireworks, a car show, live music, and more. A full schedule of events has not yet been released.

Bay City Garage will be closing at 4 p.m. Friday and will not reopen until 9 a.m. on July 6.

Hello Motor Booty Affair friends! The day is almost here...and it is a sell out crowd!! Here are some reminders and...

Fireworks: Postponed to July 5th at 9:30 PM Due to Rain Prediction on July 3rd.

Fireworks: Fireworks will be held over the Great Falls and Androscoggin River in Lewiston and Auburn on Saturday, July 3 at 9:30 p.m. (the rain date is July 5). Organizers say there won't be any vendors, music, or events this year.

RELATED: Back with a bang: Fireworks return this July in Lewiston and Auburn

Fireworks: Fireworks will be held on the beach in front of Palace Playland on Sunday, July 4 at 9:45 p.m.

Parade: Old Orchard Beach's 71st annual Independence Day Parade will start at 10 a.m. on Monday, July 5 at the Bell Tower on Temple Avenue. The parade will be followed by a band concert at the bandstand. Participants are asked to wear a mask and practice social distancing.

Funtown Splashtown USA is postponing its fireworks scheduled for July 3 to next Saturday, July 10 due to weather concerns.

Fireworks: York Police Department said Friday that fireworks at Short Sands Beach have been canceled due to "the barge carrying the fireworks not being able to operate in the rough sea." There is no rain date at this time.

The fireworks at Short Sands Beach on July 4th have been canceled due to the barge carrying the fireworks not being able to operate in the rough sea. At this time there is no rain date.

Parade:  Scheduled for 1 pm. There will be a short delay in traffic while the parade crosses Gardiner Rd to Hooper Street, then onto Federal Street, and then onto Main Street to Middle Street.

Note: This list will be updated as more events are announced.