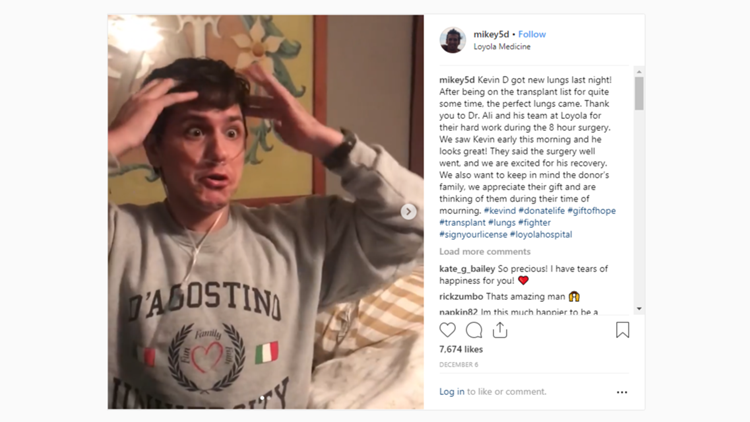 A video of a Chicago man receiving word he would finally be getting new lungs has gone viral, and it's unequivocally the best thing you'll see all week.

Kevin D'Agostino, who has cystic fibrosis, is seen in the video from 3 a.m. being told by family he would be getting a double lung transplant later that morning.

"No way, no way," Kevin continuously repeats in emotional disbelief. "Stop it … Mom, I thought I was really low on the list?"

Kevin's family is seen hugging him, in tears as they share the incredible news.

Michael D'Agostiono, Kevin's brother, shared the video on Instagram and Facebook on Dec. 6, thanking both the doctors at Loyola Medicine and the generous donors. By Thursday, his posts had 14,000 interactions and counting.

"Thank you to Dr. Ali and his team at Loyola for their hard work during the 8-hour surgery," Michael wrote. "We also want to keep in mind the donor's family, we appreciate their gift and are thinking of them during their time of mourning … We are so thankful and happy for Kevin and grateful to the selfless generosity of the donor family."

An additional photo shared by Michael shows Kevin with his hands up in celebration. "We saw Kevin early this morning and he looks great," Michael wrote. "They said the surgery went well, and we are excited for [Kevin's] recovery."

Two days later, Michael shared a video of Kevin walking in the hospital post-surgery with the guidance of a walker. "Kevin has already been cruising around the nurses station 1 day after a double lung transplant … almost unheard of," he wrote. "All signs point to a smooth recovery."