Etta Morse is like most 3-year-old toddlers. She loves the color purple and pink, she gets excited for snack time and one of her best friends just happens to be a 95-year-old veteran with a less than perfect memory. 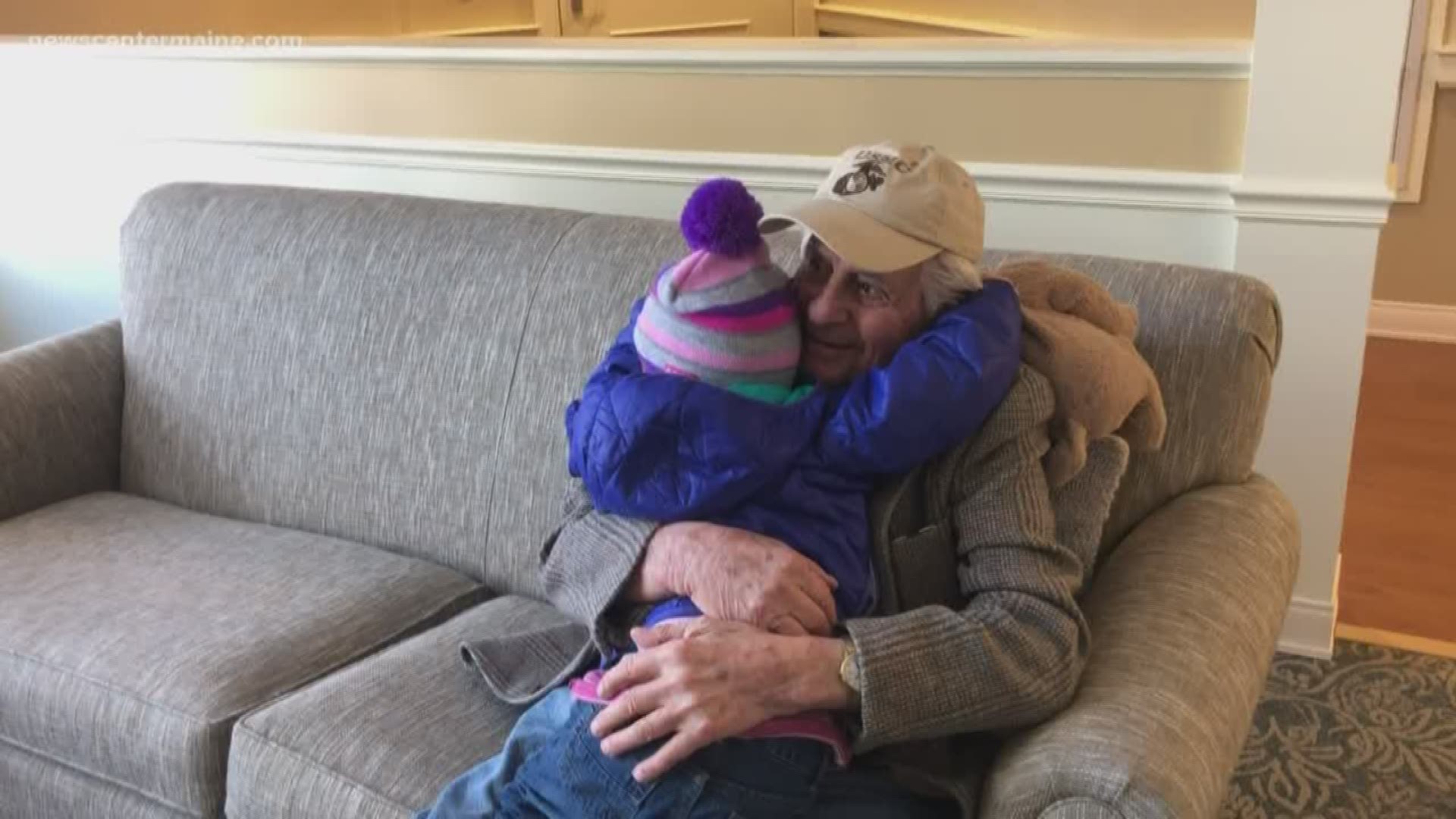 WELLS, Maine — At first glance, Etta Morse is like most 3-year-old toddlers. She loves the color purple and pink, she gets excited for snack time and one of her best friends just happens to be a 95-year-old veteran with a less than perfect memory.

When Etta spots her friend Stanley at Avita of Wells, she impulsively leaves her mom's side running, quickly ducking under his walker to get at him. Her little arms can't quite reach around Stanley's neck as she lays her head down on his shoulder, eyes closed.

"I am in heaven," Stanely whispers.

Stanley has been living at the assisted living facility since they opened two years ago. He is one of more than 60 residents all living with dementia or Alzheimer's.

The unlikely friends met at Avita's music generations class. Children from the community are welcomed every Friday to sing songs, play with instruments and games while more than 20 seniors look onward and participate if they are feeling up to the task.

Laurie Morse started bringing her son, Simon, and daughter, Etta, two years ago when Etta was just one.

“I have no idea when it actually started. They just kind of have a little connection," Morse says.

The preschoolers in class hand out instruments to the seniors and one Friday Etta brought Stanley one instrument and then another and then another until he had eight. She wouldn't give them out to anyone else. This is when her mom noticed that she had taken a liking to Stanley.

Stanley is not always an early riser but on Fridays, Avita staff just mention Etta’s name and he gets ready for their visits, making sure to look his best, usually dressing up in a blazer.

Stanley is a man of few words but one thing is clear, “I just adore her,” he says, as he looks in Etta's direction.

Staff at Avita say the friendship has been great for Stanley but is surprising to many.

"It is really strange because I guess nobody would imagine that those two would have this amazing relationship," says Avita employee Sharon Gonyer.

Stanley doesn't always remember Etta's name but Gonyer says when he sees her face he lights up, something clicks, and he knows her again.

Etta talks about Stanley during the week and she doesn't just see him at music class. Morse takes her daughter to visit Stanley. They play puzzles. Stanley sings to Etta as she draws. And recently the toddler became the teacher when Etta schooled Stanely on how to play Candy Land.

“We came to visit him for his birthday and I asked if any family member was coming to visit and he said no. And she, out of the blue goes, 'well now you have our family,'” Morse says of her daughter.

When asked about how he likes the music class Stanley makes it clear the only reason he goes is for his dear little friend.

RELATED: A kid’s guide to how the Maine legislature works (it might help adults, too)

Laurie Morse doesn't know why Etta picked Stanley but she is grateful. Through her 3-year-old, she too has a new friend.

"I think Stanley is a very gentle soul...I think there is just a feeling between them that they just know that they love each other and care about each other."

For Stanley and Etta, their unlikely friendship has been a blessing for them both even if it will be one that is hard to always remember.