'A simple image can mean a lot.' Falmouth artist sends hundreds of unique postcards to Maine schools and hospitals to brighten COVID days 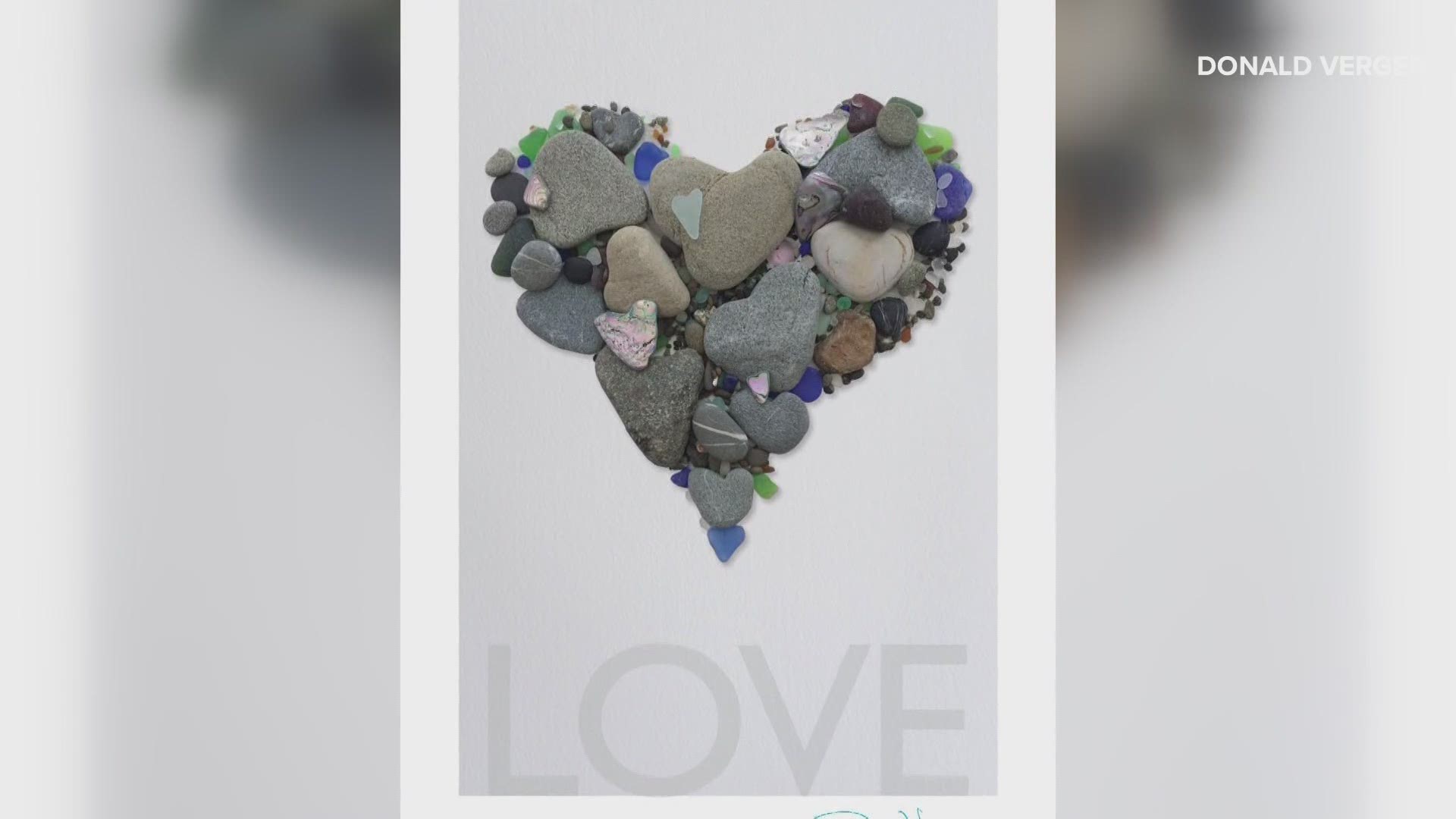 He remembers photographing tornadic storms in the midwest almost a decade ago, including a tornado in Joplin, Missouri, in 2011.

"By some amazing fortune we escaped perishing in that storm," Verger said. "Many people did not. After that, I heard tornado sirens in my head for a very long time."

A few months in, Verger took a plane to California seeking fresh air and walked the beach every morning picking up pieces of sea glass.

"I thought each piece was precious and special, almost like a person," Verger said.

After collecting a variety of sea glass and shells, Verger laid the sea glass on a table and started making heart-shaped art, creating colorful patterns that amazed everyone who walked by.

"The fact that it's traveled in the ocean and undergone change, it seemed very quickly that those hearts captivated peoples attention," added Verger. "They found them soothing, calming, beautiful, and engaging."

Mesmerized by the glass, Verger created hundreds of designs into postcards that he donates to Maine schools and hospitals to help brighten people's days.

He told NEWS CENTER Maine that since the pandemic started he has donated about 25,000 postcards and larger heart-shaped posters to many local hospitals and schools in Maine and across the country.

"I have a history and pattern of giving, it's something natural for me," Verger said. "When the COVID pandemic first hit New York so severely, I read a post by Dr. Craig Spencer from NewYork-Presbyterian/Columbia University Irving Medical Center  and he spoke about the terror of coming home after a shift."

Verger immediately sent him 2,500 postcards to help ease the anxieties and stress of doctors, nurses, and patients.

Since then, Verger has mailed more postcards to health-care workers in gratitude for their hard work. His work can be found at Maine Medical Center, Mercy Hospital, Northern Light Health hospitals in Maine, the Shriners Hospital for Children in Boston, among others.

"For them to have something beautiful and loving to counter-balance the terror and harshness of this epidemic," he said.

Verger said he's been struck over the years by the kindness of others and now it's his turn to give art to hospitals and schools to enjoy.

"I've been touched by people's kindness. It's natural for me to reciprocate," he said.

Besides his heart-shaped sea glass art, Verger's nature and landscape photography is on display at various hospitals.

He said the art on the walls of hospitals calms and helps patients, visitors, and doctors while someone is receiving treatment.

"I've learned that a simple image can mean a lot and touch someone in a very soothing and deep way," Verger said.

Verger typically has some of his art outside his front door for anyone walking by to admire -- and to take a piece home.

"In all the things I've done, I've tried to spread hope and love," he said. "I've used those words printed on the front of the postcards. A heart seems to touch people and it touches me as well."

Verger said he enjoys donating his art pieces to people, especially during hard times like the coronavirus pandemic.

For more information on his art, you can email Verger at donaldverger@gmail.com or click here.

"I'm in the process of printing another 20,000 postcards to send to new places," says he said.

Verger's work is sold on Amazon and locally at Royal River Bookstore in Yarmouth, Liberty Graphics in Portland, and The Deep Blue in Kennebunkport.