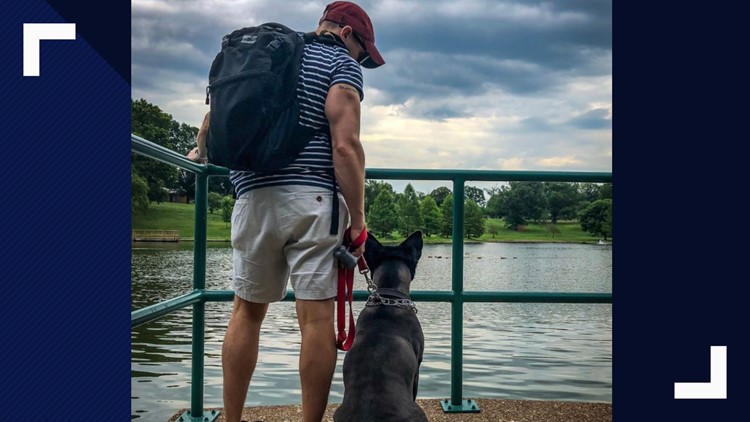 ST. LOUIS – Dog lovers, you’ll want to grab a tissue for this…

Former St. Louis Fire Captain Gregg Favre shared his story of his rescue dog that died after a four-month battle with cancer.

He rescued Bella while he was on duty at a firehouse. Over the next decade, the two became inseparable, Favre said.

Bella passed away in Favre’s arms, peacefully, on May 9. Favre said he and Bella’s bond was incredible and they would communicate with glances and head nods. He even said his wife would joke the two were ganging up on her.

“Over the years we’ve taken 1000s of walks together – from state parks to national monuments, cathedrals to universities. As life came crashing against our door –grad school, promotions, loss, injury & sickness– our routine stayed the same. She was always grounding. Always loyal,” Favre said.

Favre said he and his wife donated Bella’s unused cancer medications to other families who might not be able to afford the prescription. He said Stray Rescue provided initial medical care to Bella when she was first rescued and if anyone wants to donate in honor of Bella, to donate to the organization.

“I could spend weeks posting pictures & telling you stories of how funny, brave & tender she was. My point to all of this is that love & loss go hand in hand. Bella & I made the most of our time & I hope that in your life, you are cultivating your own brand of joy,” he added.

“Finally, if you’ve come this far in this thread, please watch this short clip. Since her diagnosis 4 months ago, I’ve said this poem to Bella on every walk we’ve taken. As I held her last night, before she slipped away, I told her once more, “heart to chest.” Goodbye my friend,” Favre said.

Favre said the outpouring of support has meant everything to him.