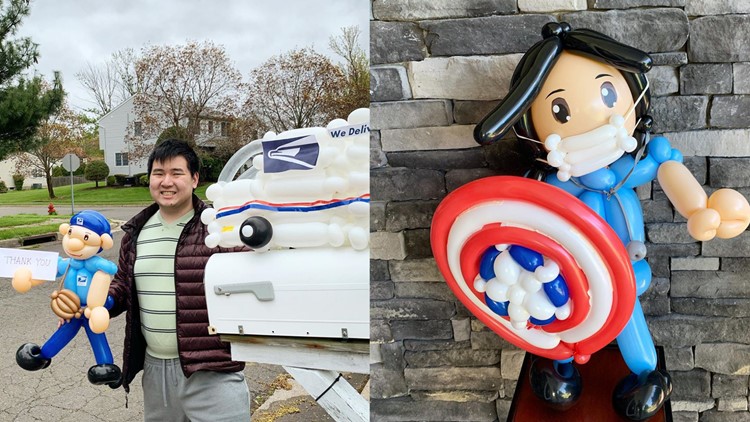 NEW JERSEY, USA — As many around the country show their appreciation for essential workers during the pandemic fight, one New Jersey artist put his talents on display with some incredible balloon sculpting skills.

Balloon artist Eddie Lin has been making elaborate pieces to honor those on the front line of the fight, like healthcare providers, postal workers, delivery drivers and grocery store workers.

Eddie, 22, was diagnosed with autism at the age of three. By 10, Eddie had taught himself how to twist balloons by watching YouTube videos. His mother Jenny says Eddie lacks expressive speech skills but has a talent for visual learning. So, YouTube proved to be a great platform for his growth as an artist. Soon Eddie was able to create intricate balloon sculptures using professional-grade materials.

Eddie's parents didn't make much of his hobby at first. But, in 2014, while on a trip to visit family in Taiwan, his mother Jenny arranged balloon twisting classes for Eddie. It was the first time Eddie was able to get in-person instruction from professional balloon artists. He ended up returning to Taiwan two additional times that same year to study the craft.

RELATED: Watch this little boy overflowing with joy as he reunites with grandparents through glass door

While he made progress in his balloon sculpting skills, Eddie's parents began noticing behavioral changes. One year, as Eddie was making a balloon turkey for a Thanksgiving fundraiser, he ran out of brown balloons. Instead of stopping because of limited color choices, Eddie showed a willingness to be flexible and made changes to the original design. It was something that is often more difficult for those dealing with autism.

"That was the defining moment that I knew he was willing to adapt," said Jenny.

From there, they turned his hobby into a business and named it "Ausome Balloon Creator" — no, that's not a typo.

It started with orders from friends, and gradually expanded to weddings, birthday parties and banquets.

Some of the balloon pieces Eddie Lin created over the years.
Ausome Balloon Creator

Balloon art also became a tool for Eddie to express himself. He would make balloon flowers for people who helped him, as a way to show gratitude.

When his best friend Kay told him that her mother, a local grocery store manager, was under a lot of stress because of the pandemic, Eddie did what came naturally. He made a balloon shopping cart with a big "THANK YOU" on it and gave it to his friend's mother.

Eddie went on to create more pieces. He got creative, making healthcare providers as Marvel heroes, a postal worker with a USPS delivery truck, and a giant balloon heart with the word "HOPE" on it.

"We want to extend our gratitude to the people who went above and beyond to perform their daily jobs during this time," said Jenny. "We recognize the sacrifice they put in, and we want to use our way to say thank you."

Being a big Marvel, Eddie Lin based his design of balloon healthcare providers on Marvel heroes.
Ausome Balloon Creator

Pictures of Eddie holding his balloon pieces went viral, and the family was swamped with media requests and orders. As Eddie made local and national headlines, Jenny had flashbacks of what they went though over the years.

Recently, Eddie went to a convenience store to buy food. While there, he was yelled at by a staff member for failing to understand instructions and using the wrong bathroom.

"While the media is celebrating his differences, there are still people who don't respect the difference and who are quick to 'judge'," Eddie's mother said.

Eddie's mother Jenny hopes people who were inspired by Eddie's story will also remember to practice kindness in daily life, which is what Eddie's story is about. She added that Eddie had been on both the receiving and giving end of kindness: he wouldn't be who he is today without people who were willing to help and teach a kid on the autism spectrum.

"Everybody is doing the best they can in this challenging time, and everybody is very anxious because of the unknown," Jenny said.

"I believe that when we all stick together and continue to do what we do best, we will come out strong."