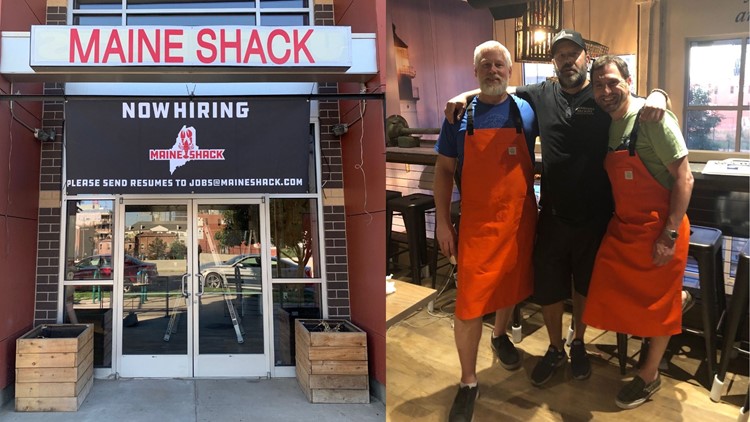 DENVER — Denver sits amidst the Rocky Mountains, topped with patches of snow for a large part of the year. The Colorado city is over 2,000 miles away from Maine's drastically different coast, teeming with grand pine trees, fascinating wildlife, and an ocean that draws in visitors from around the world.

The dichotomy represents a "tale of two cities" (or, in this case, the Mile High City and the Pine Tree State) -- but a new restaurant, opening up in the heart of Denver, could soon start to bridge that gap.

46-year-old Drew Ryan is a born and raised Mainer. If he ever had that stereotypical, 'Ayuh, I love the chow-dah' accent, it has since faded away -- but Ryan's passion for his hometown Augusta certainly has not.

In 2006, Ryan took the leap to move out west to Colorado. He's been there ever since, for over a decade, and says he loves the state, its skiing wonders, and the life Denver has to offer.

"But I miss Maine," Ryan said during an interview with NEWS CENTER Maine over the phone. "I miss the food. I miss everything about Maine."

That nostalgia and yearning for a taste of home lead Ryan to a crazy adventure and ambitious undertaking. In 2013, he decided he wanted to start a restaurant, dedicated to his passion for everything that, he says, makes Maine seafood so special.

"It's the geography of Maine -- the rock coast, the clam flats. It's a breeding ground for the best, freshest clams," Ryan gushed with a sense of longing. "The people that harvest lobster and clams and scallops (in Maine) treat everything with such good care and pride."

The desire for fresh, right-out-of-the-salty-water seafood isn't lost on people living in Colorado, despite the fact that it's a landlocked state. Ryan said since he started, he has had stints with pop-ups and events and has gotten a huge reaction each time. Lines have trickled out doors onto the street, and at a music festival, he says he sold out of lobster rolls.

After all, in Colorado, Ryan says there is nothing quite like what he is offering.

"People are crazy over lobster everywhere," Ryan emphasized, "and out here, it's hard. People aren't used to fresh lobster."

The lobster that Ryan uses is just that -- impeccably fresh, shipped to him from Greenhead Lobster in Stonington Harbor, right after getting picked out of the water.

His food is in high demand, but the journey to start Maine Shack has been a long one. In December 2017, after three and a half years of little luck, Ryan bought an existing space, formerly used by Uber Eats, and gutted it out. As with any business, permits and other details cause some hassle at first -- but Ryan's main concern has been trying to make sure he follows through with exactly what is in the joint's name.

Maine Shack is positioned squarely in downtown Denver between the city's baseball and football stadiums in the Lower Highlands neighborhood. But its outside facade doesn't quite fit in with the industrial scene across the bridge. Wooden picnic tables arranged in rows line the front deck, and when you enter the door...

"(It's like) you’re stepping out of Denver and stepping into Maine," Ryan noted proudly. 01 / 15
The entrance to Maine Shack is pristine and new -- and it looks like they're even hiring staff.
02 / 15
From left to right: Chef Craig Dixon, Drew Ryan, and Ryan's partner, John Caprio.
03 / 15
Customers will order food at a bar counter -- a very classic "Maine" tradition.
04 / 15
Maine Shack boasts a stunning 700 square-foot mural of Portland Head Light.
05 / 15
Dangling from the ceiling are traps from Maine with lobsters inside of them (don't worry -- these lobsters aren't real).
06 / 15
Maine paraphernalia hangs proudly all over this wall.
07 / 15
On the wall is a rusty ship propeller, given to Drew Ryan from Captain Jim's Marine Salvage in Portland.
08 / 15
A life preserver, oars, Sea Dogs jersey, and a yellow sailor from the Maine State Prison decorate this nook.
09 / 15
Drew Ryan brought a channel marker from Monhegan Island to Maine Shack.
10 / 15
A quart of wood from N.C. Hunt Lumber in Jefferson is stacked near Maine Shack's entrance.
11 / 15
This UMaine jersey is signed by the university's 2004-2005 hockey team.
12 / 15
Maine Shack wouldn't be complete without a lobsterman sketch.
13 / 15
This barn door from N.C. Hunt Lumber in Jefferson is now Drew Ryan's office door.
14 / 15
Maine Shack represents the Bag and Kettle Restaurant at Sugarloaf Mountain.
15 / 15
"May you have fair winds and following seas" -- a phrase from DiMillo's On The Water in Portland.

Maine Shack has trinkets and treasures from earlier endeavors in the winter of 2018 when Ryan and some of his friends scoured his home state and filled up a U-Haul with reclaimed wood, lobster traps -- you name it, and they probably hand-picked it.

The restaurant encapsulates some of Maine's most famous landmarks, with items like a channel marker from Monhegan Island, a Sea Dogs jersey, a sign from Sugarloaf Mountain, paper towel holders made in the Maine State Prison, an antique oar more than 100 years old -- and so much more.

The food is also all-New England. Ryan will be serving "strictly Maine foods", as he put it -- like five different kinds of lobster rolls, lobster pie, all versions of fried seafood, clam chowder, lobster mac and cheese, clam dip -- the list goes on. He'll also be whipping up famous North Shore Boston roast beef sandwiches for anyone with taste buds that prefer non-seafood dishes.

Oh, and available to quench your thirst -- Moxie. You can't forget the Moxie.

As someone who grew up in the restaurant business, running a special delivery van for North Center Food Service (now known as PFG) all over the state of Maine, Ryan expressed how much this project means to him. He expects to see a large crowd of people on Maine Shack's opening day, scheduled for Tuesday, July 30.

"I want the people (who come) to fall in love with Maine from a distance and want to actually jump on plane and go to Maine."

Ryan's goal is a lofty one -- but he's well on his way to success. He's had press coverage from outlets around Colorado and has even been written up in the Boston Globe.

And now, his message has finally made its way to Maine -- the state that started it all.