Fiddleheads: The joy of harvesting and eating this Maine delicacy 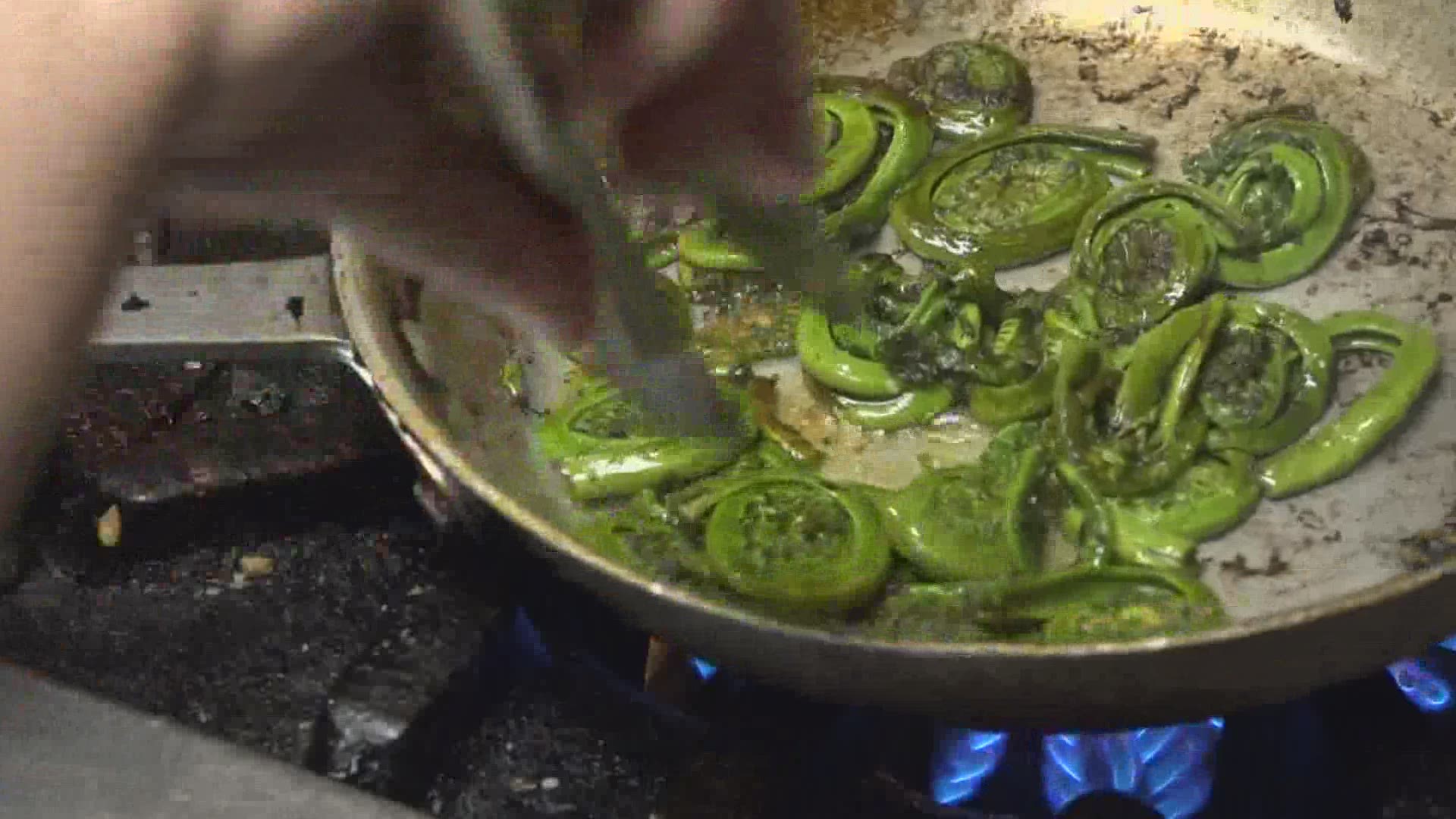 MAINE, Maine — The fiddlehead season is over for Maine this year as they pop up as soon as the snow melts. Maine's fiddlehead picking season lasts typically six weeks.

The fiddlehead ferns we eat in Maine are from the ostrich fern.

Mainers have them deep-fried, in salads, as a pizza topping, as a side or appetizer and as a soup.

"They are super seasonal! The season can be any time from a week to three weeks depending on how the weather is," said Melissa Chaiken, The Fiddlehead restaurant chef.

Melissa Chaiken is the chef at The Fiddlehead Restaurant in Bangor.

Chaiken bought and picked 50 pounds of fiddleheads ferns a few months ago and is still serving them as an appetizer.

"We clean them first, then blanch them, and then we bag them up...some of them we pickle so that we can preserve them, others we bag them and freeze," said Chaiken.

The Fiddlehead Restaurant in Bangor thinks they will have fiddleheads for the next two weeks.

the fiddlehead restaurant
Greetings, Fiddlehead Family! We are reopening on Tuesday, June 2 f... or dine-in service as well as take out/curbside, with our usual hours of operation: Tues-Sun 5-9pm, & the bar open late. The Spring-Early Summer menu will be listed on our website @ thefiddleheadrestaurant.com by Monday, June 1 & we are now taking reservations.

It's important to know how to clean and cook fiddleheads properly.

When picking them up near rivers:

When preparing remember that it's really important to clean and cook them properly:

Kim Lagassy is a server at Lakeview Restaurant in Saint Agatha. Lagassy says Harvesting fiddleheads is a family tradition that roots back for years and generations.

"It only comes around a short amount of time and our parents, grandparents, and great grandparents that's what they lived on and it continues on in us," said Lagassy.

Lakeview Restaurant in the county offers plenty of dishes that include this Maine delicacy, like fiddlehead soup and as a side.

"The end of May beginning of June is the last time to pick them, then they are not good after that she says," said Lagassy.

Jennifer Daigle is the Lakeview Restaurant owner. Daigle says everyone's favorite is fried fiddleheads as an appetizer. The restaurant still has fiddleheads for the season, for clients that are still craving some.

"The further south you go the more money you pay a pound, we purchase them for like 3 dollars a pound and if you look down south you can get them anywhere from 7, 8, 9 or 10 dollars a pound," said Daigle.

RELATED: What to look for and how to cook fiddleheads