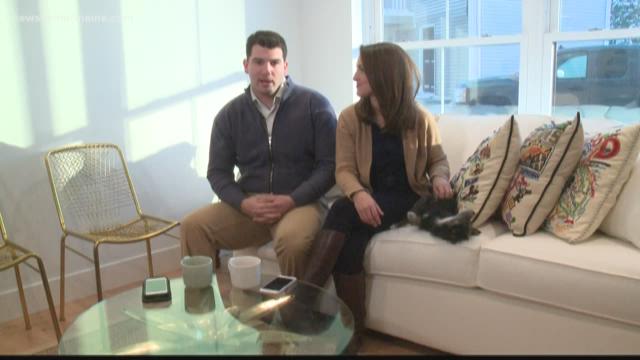 PORTLAND (NEWS CENTER Maine) -- For Clay Gordon and Lindsey Mills, it was love at first handshake.

The pair met on Lindsey's job interview in Bangor. Although the chemistry was instant, the first time the pair spent time alone together, Clay made sure to emphasize that it was purely platonic. However, that didn't last long. They went on a "real date" shortly afterward, ice skating and sitting down for sushi.

I had this whole speech in my head. I was thinking, I'm on the news, I could easily do a whole, little speech. And then I got down on one knee and I couldn't get words out. I think it was short and sweet. I said, 'Will you marry me,' and then I burst out crying.

Lindsey adds, "You said, 'You're my best friend. Will you marry me?'"

Their story didn't end in Bangor. After the proposal, Clay took a job in Peoria, Illinois, and Lindsey stayed behind in Bangor, but not for long. "I was out visiting Clay one week, and I ran by the station just to meet everybody," Lindsey said, "and they ended up opening up a spot on the morning show there. So he did it solo for a little while and then I came on."

Although Clay and Lindsey waited a few months before announcing to the audience they were a couple, their chemistry was apparent right away.

Clay says, "Some people have written in and said 'We can clearly tell you guys are a couple.' It’s like, what are we doing on air that shows that? It’s not like we’re holding hands." And looking into Lindsey's eyes, Clay adds jokingly, "Like, what's the next story, dear?"

They enjoyed Illinois, but never lost their love for Vacationland.

Lindsey says, "We love Maine! I mean, in Peoria, our coworkers would poke fun at us because we would talk about Maine so much. They wanted to make a Maine jar."

When two anchor positions opened at NEWS CENTER Maine, they jumped at the opportunity to fill them.

Clay and Lindsey currently live in Portland with their dog, a three-legged Chihuahua named Tito.