'The Great State of Maine Air Show' returned to the Brunswick Executive Airport for the first time since 2017 with a headline performance by the Blue Angels. 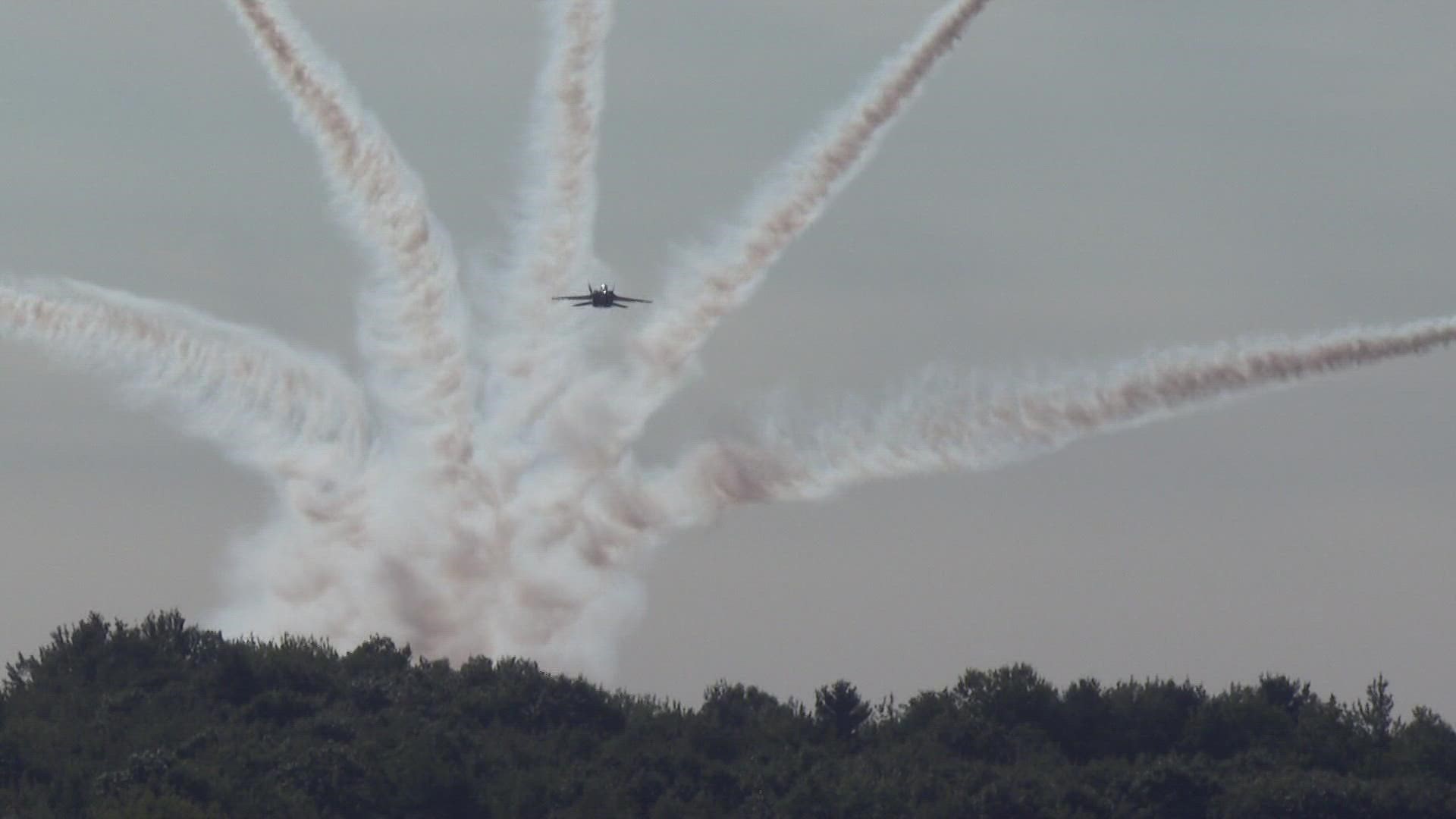 BRUNSWICK, Maine — It was a perfect day for flying at the Brunswick Executive Airport. On Saturday, September 4, the mid-70s temperature and lack of clouds gave the first day of 'The Great State of Maine Air Show' a perfect setting.

“If we could have scripted it any better, I couldn’t have done it," Jim Breen, the President and Founder of the Air Show Network said. “Everyone’s going up [in the air] today. Got to love it.”

Breen has been hosting air shows all over the country for years and said while Maine isn't the biggest market he goes to, the crowds are passionate and always come to support.

This is the first time the show has been held in Brunswick since 2017. The headlining performance by the U.S. Navy Blue Angels was actually scheduled for somewhere else. But lucky for aviation fans in Vacationland, it got canceled.

“[The Blue Angels} were supposed to be down in Cape Cod, Cape Cod canceled, and I said well let’s go to Maine," Breen added.

The Angels flew their new Boeing F/A-18 'Super Hornets' Saturday as the six pilots are flying these faster and more powerful planes for the first time this season. This is the 75th year the Blue Angels have been performing across the country.

The training is strenuous and the pilots practice constantly before the first show of the year in April. Lauren and Jim Haley should know. Their son James flies in the 'No.2 Hornet.'

“When he was probably ten years old, I asked him what he wanted to do one day and he said, 'well I’d like to fly,'" Jim said after the show.

The Candian, Texas natives don't come from a long line of military servicemen or women. However, when James first got in a plane, his mom knew that's what he wanted to do.

Many parents can relate to the nervousness of watching their child play contact sports, perform on stage, or race in a car. But few folks in the country know what it's like to watch their kid reach speeds of up to 700 mph during a show while flying upside down or straight up in the air.

Lauren added she only gets nervous when the six planes fly just 18-inches apart from each other during a series of maneuvers.

“[It was] exciting, nerve-wracking, but exciting nerves," he said.

Corrall added he's been to one other air show before and was able to catch a glimpse of the U.S. Air Force 'Thunderbirds' demonstration, but said the Blue Angels had a better performance.

His uncle Ken Campagnone is no stranger to these events. He said he's been attending air shows on and off since 1984 but they never get old.

While that 45-minute show was the grand finale of the day, it was not the only entertainment offered. Some of the best aerial pilots in the world showed off their flips and tricks to a crowd of thousands.

There was even a tribute to Bethel native Benjamin Cross, a Marine pilot who died in a helicopter crash while serving in Japan four years ago. Two of his fellow crew members were at the air show and hosted a memorial for Cross and even flew to his gravesite on Friday.

The performances will return to the Brunswick Executive Airport on Sunday for the second day of the show. The gates open at 8 a.m. and close at 4:30 p.m.