Facing adversity one tire flip at a time, Mike Laliberte competes in the 'Tire Flip Challenge' every year. On Saturday, he broke his record with a prosthetic leg. 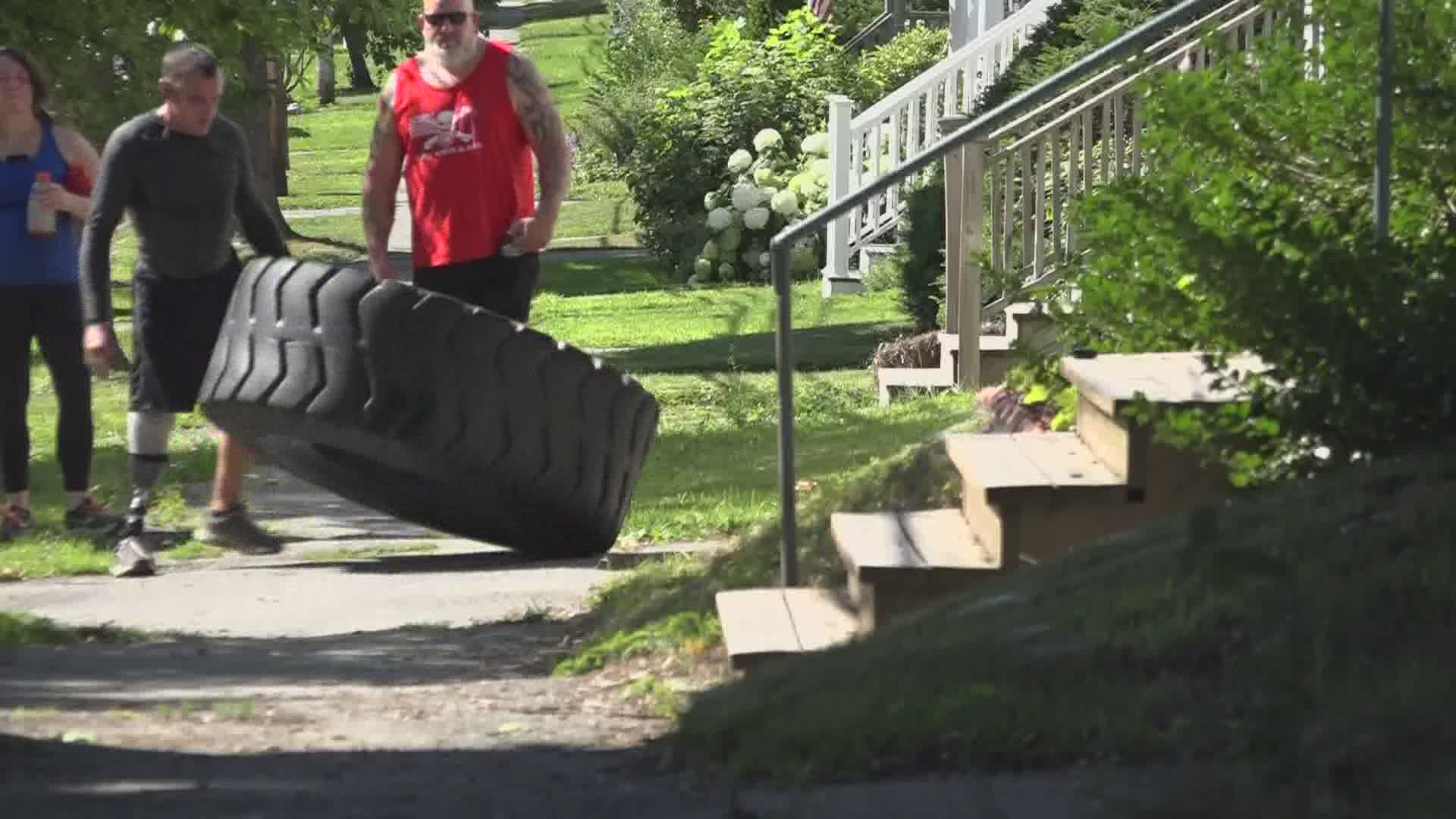 BANGOR, Maine — One of the last things you should expect to be wakened up by is from the sound of a 400-pound tire hitting the ground. But for residents on Maple Street in Bangor, it happens every year.

Mike Laliberte has been competing in the Tire Flip Challenge, flipping a 400-pound tire for one mile, once a year since 2015.

“First quarter’s not too bad, you get to the halfway point and you’re like well it’s all downhill from there," Laliberte said.

Starting around 9 a.m. on Saturday and finishing three hours and nine minutes later, Laliberte set a personal record in his sixth year of the challenge.

As neighbors, friends, and strangers alike supported Laliberte during his challenge, a new "piece of equipment" was easily visible.

Laliberte did this year's challenge with a prosthetic leg.

When he was 13, he was shot during a hunting accident, causing constant pain in his right leg and foot. After years of suffering, he decided to get the prosthetic leg a few months ago.

The yearly challenge was sparked when someone told Laliberte he couldn't do it in his physical condition.

“Someone told him he couldn’t do it. There’s no way that guy could flip the tire a mile," his wife Noell Palmieri said.

“I don’t like being told I can’t do things," Laliberte added. "With that leg, my leg, that was all busted up. Okay, well challenge accepted.”

Laliberte didn't train or prepare before his first attempt in 2015, helping him understand the preparations that are needed to finish the challenge.

Last year he finished the challenge in more than four and a half hours.

This year, he gives his new "parts" credit for the personal record.

“The secret ingredient I guess," Laliberte said with a laugh.

RELATED: 'Never give up on your dream': McDonald’s employee with special needs thankful for 35-year career

If you stuck around to watch him finish, you might have run into the people who helped teach his "never give up" attitude.

His parents, Dianne and Edward, were cheering on their son for the sixth time.

“He was born with this inner strength, so he’s been put to the challenge with it, so we’re so proud," Dianne said. "We never took no, I can’t do that because it wasn’t accepted in our home."

Palmieri said watching this challenge every year lets her family realize some of the smaller things in life aren't worth stressing about. Every flip of the tire proves anything is possible.

“It’s amazing for our kids to see how their dad faces adversity," she added.

As for next year, Laliberte said he is looking to break the sub-three hour mark. It takes months of training to complete this task so after enjoying some pizza, ice cream, and Corona Lights, Laliberte will begin his training for 2021's challenge.

RELATED: Machias teenager raises money for Bangor NICU that saved her life in 2005