While others worry about politics and pandemic, Bristol builds future of fish 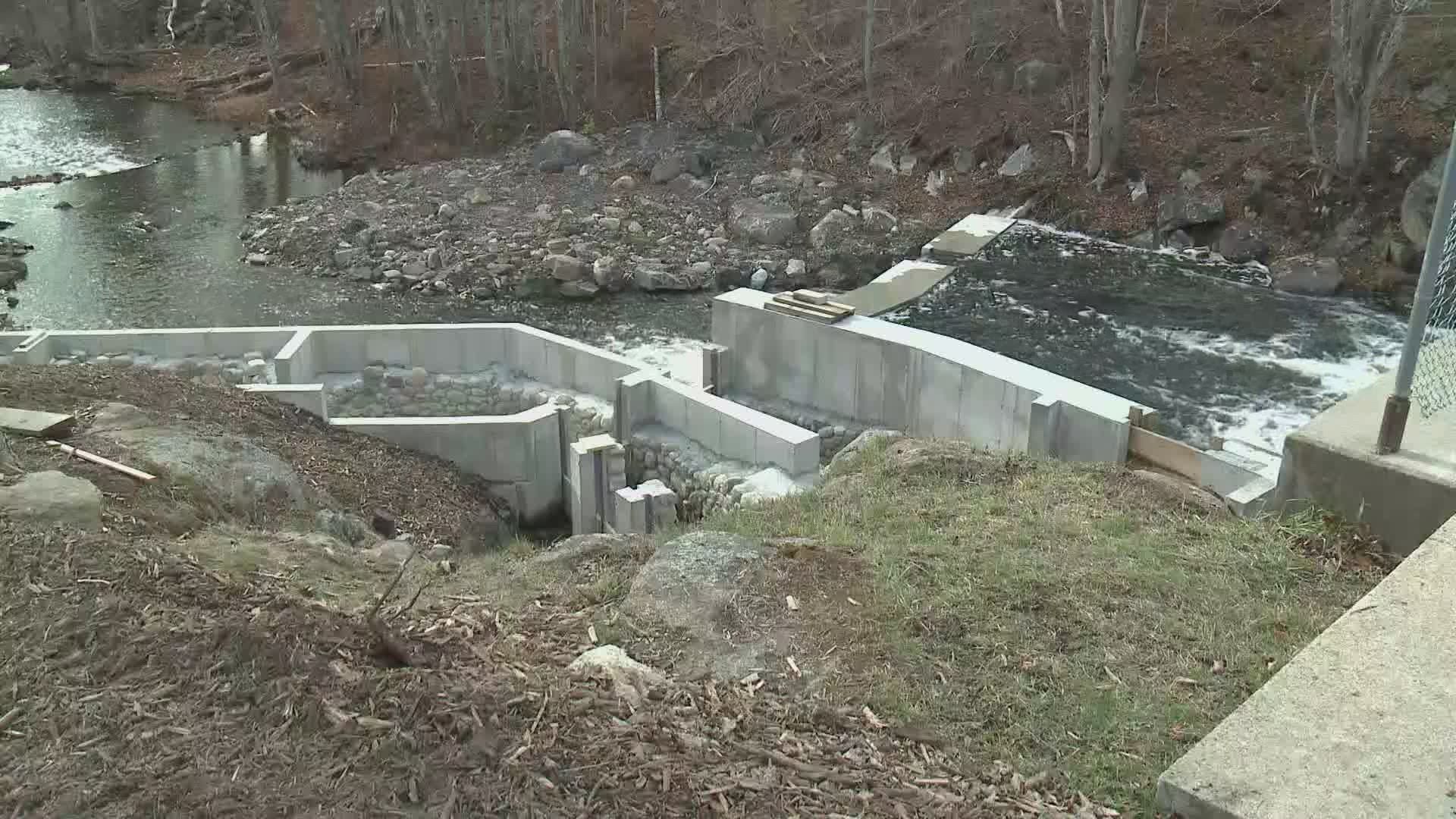 BRISTOL, Maine — Inside what looks like a concrete box, Peter Anderson and Richard Powell wrestle a large stone into place, making a path for fish to follow next spring.

The two men are veteran stonemasons from Bristol and are building the stone interiors of 18 of those boxes, to build the new Bristol Mills fish ladder.

When finished, the chambers that make up the ladder will be filled with water, some as much as 10 feet deep, to form the series of pools and small waterfalls that will help alewives and other fish climb the 13.5-foot barrier of the Bristol Mills dam.

Increasing the annual run of alewives in the river, and then into Biscay Pond and Pemaquid Pond upstream, is important for the ecology of the watershed, as alewives and other migratory fish play an important role in the natural food chain.

The fish are also important to local lobstermen as a source of springtime bait. Currently, the river doesn't produce enough fish to allow a harvest, but that is one of the hopes of those planning the project.

The new pools and jumps will replace a much older fish ladder that had been allowed some fish to move upstream, but not as many as the town and biologists want.

“They had 129,00 fish made it up the ladder (last spring), so there are probably a lot that didn’t make it up last year and if they come back it will be a lot easier for them to get up,” said general contractor Mark Becker.

Becker knows fish ladders. He was a contractor for the larger and very successful ladder restoration in Damariscotta Mills several years ago, which has increased the number of fish moving up that stream by hundreds of thousands annually.

Bristol’s Fish Committee is hoping to at least double or triple the number of fish coming up through the smaller Pemaquid River.

Townspeople clearly agree with the goal and have supported the fish ladder project with donations and extra tax dollars. The current Phase One portion is costing $550,000, which is about evenly divided between donations and local taxes. That amount will pay for the ladder to be completed for the fish in time for the migration next spring. At that point, the ladder will be complete to just above the normal waterline, with the inside of the concrete chambers all lined with hand-laid stone. Becker says using the stone is far better for the fish than simply having concrete because the stone breaks up the flow of the water and helps pump oxygen into the resting pools. It provides a more natural surrounding as well and lets fish sense the main current coming down from above, which guides them to the multiple, 9-inch waterfall ”steps” up the ladder. The old ladder, said Becker, was narrow, all concrete, and provided no places for fish to rest away from the current.

The ladder is using several thousand rocks of various sizes, many of which were donated by local residents from old stone walls and other sources.

“We put out the word on Facebook and social media channels that we needed stones,” said Fish Committee chair Jay Crooker, “and were overwhelmed by the response of people in town. (They) said I have this pile of stones or have a stone wall in the wood on their property."

Crooker added that he thinks the willingness to provide stones is a sign of how popular the project is.

“People said sure, and that may want to feel like they’re contributing, the best indication the town is into this project. “

They will have another chance to show support in the next few months. The town is now soliciting further donations to complete the project. Becker said the current work will finish the ladder to just above the waterline, good for fish, but not looking the way they want. The additional donations will finish off the above-water portions with stone, build better controls for dam gates, and finally landscape the whole area for a park, with displays on the history of the dam and its mills, and ecological information about the