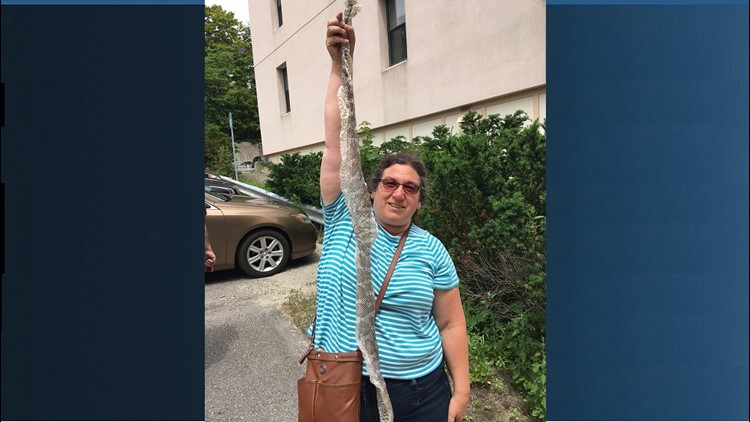 Photo by: Nancy Cronin
A Fayette woman got quite a surprise Tuesday morning after she found a very large snakeskin in some bushes in Augusta.

AUGUSTA, Maine — A Fayette woman got quite a surprise Tuesday morning when she found a very large snakeskin in some bushes in Augusta.

Nancy Cronin was on her way to a chiropractor appointment when noticed the reptiles abandoned skin. Cronin says she immediately called for a warden just in case the snake was still around.

“I wanted them to investigate it so that is could be taken care of properly," Cronin said told NEWS CENTER Maine.

Cronin said she wanted to keep the snakeskin for her son, but the warden said he needed to take it to help identify the species of snake.

Cronin said she wanted to keep the 8 to 9 foot skin for her son but the warden needed to take it to help identify the species of snake.
Nancy Cronin

Maine Warden Service Cpl. John MacDonald confirmed the findings but added he didn’t believe there was any concern to the public, due to it being found in an industrial area on Water Street.

He also said that it is hard to tell the exact length of a snake from the skin because it stretches a bit as it goes through the process of shedding its skin.

As of early Tuesday afternoon, the snake had still not been identified.