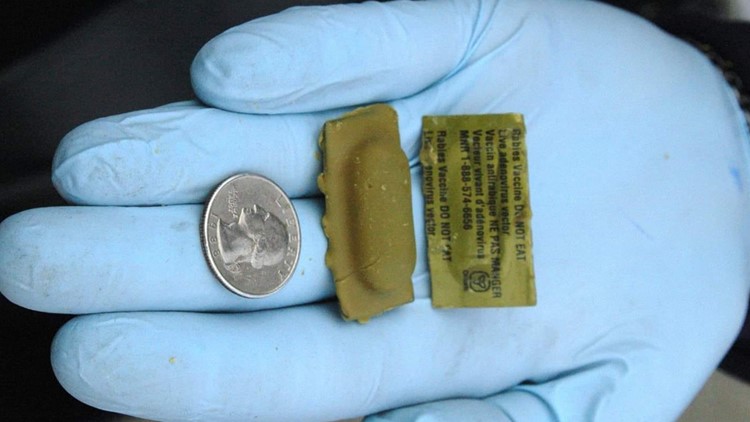 Photo by: Caribou Police Dept.
These are the small, one to two-inch oral rabies vaccine (ORV) baits that will be scattered around northeastern Maine in August.

Oral rabies vaccines to be dropped over Maine woods

AUGUSTA, Maine — Something a little different will be falling from rural Maine skies this August: rabies vaccines.

From Aug. 3-7, 351,000 oral rabies vaccines (ORVs) will be dropped from airplanes over the rural woods of northeastern Maine to tackle the state's number of rabid raccoons.

According to the Maine Dept. of Health and Human Services (DHHS), this is a recurring mission.

"Since 2003, Wildlife Services has worked to eliminate raccoon rabies from northern Maine because the virus poses a threat to human and animal health," MDHHS said in a press release.

As of July 23, Maine DHHS has reported 49 rabid foxes, skunks, bats and raccoons in 12 of state's 16 counties.

The ORVs are small, one to two-inch sachets coated with fishmeal. These baits are safe for over 60 animal species, including cats and dogs, however the DHHS suggests avoiding them and washing with soap water if you happen to touch any.

The ORV baits will cover roughly 2,405-square miles from Houlton to Weston.

While rural areas will be covered by plane, wildlife personnel will scatter ORVs from cars in populated spots.

RELATED: Rabies vaccines to be dropped from airplanes over Maine woods