One of Kate McCormick's Dominique hens might just think she is a human ... or at least a house pet. She is ruling the roost in McCormick's Waldo home. 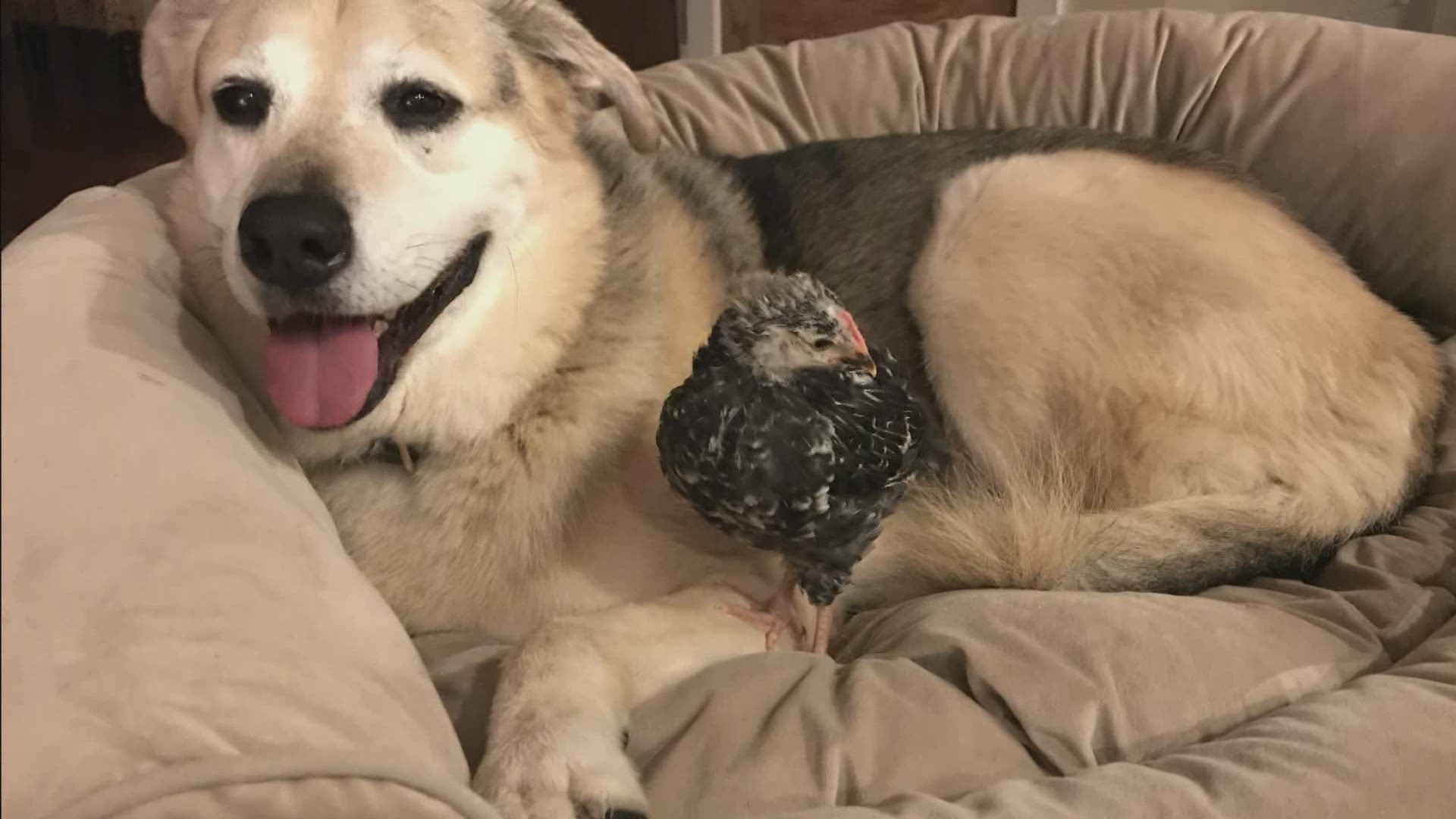 WALDO, Maine — UPDATE: We brought you the story of a dog-lovin chicken, known as Best Friend Chicken because she is so friendly and more of a human than chicken, in November of 2019. As of April 16, 2020 dog-lovin' hen is still laying her eggs in her owner's house every day. Best Friend Chicken no longer lays her eggs in Kate McCormick's bed but rather has taken over a basket in the laundry room, where one of Kate's cats used to lounge.

"She sits on the deck railing and pecks at the window until I come open it." Kate says the chicken then flies into the laundry, lays her eggs, plays with Jake, her dog friend and then she helps herself to the cat and dog food before she squawks again when she is ready to go back out in the yard with her sisters.

Best Friend Chicken just celebrated her first birthday on April 1st with her sisters. Kate made them a banana, apple, strawberry and mealworm cake for the occasion and as always Jake looked on with a smile. 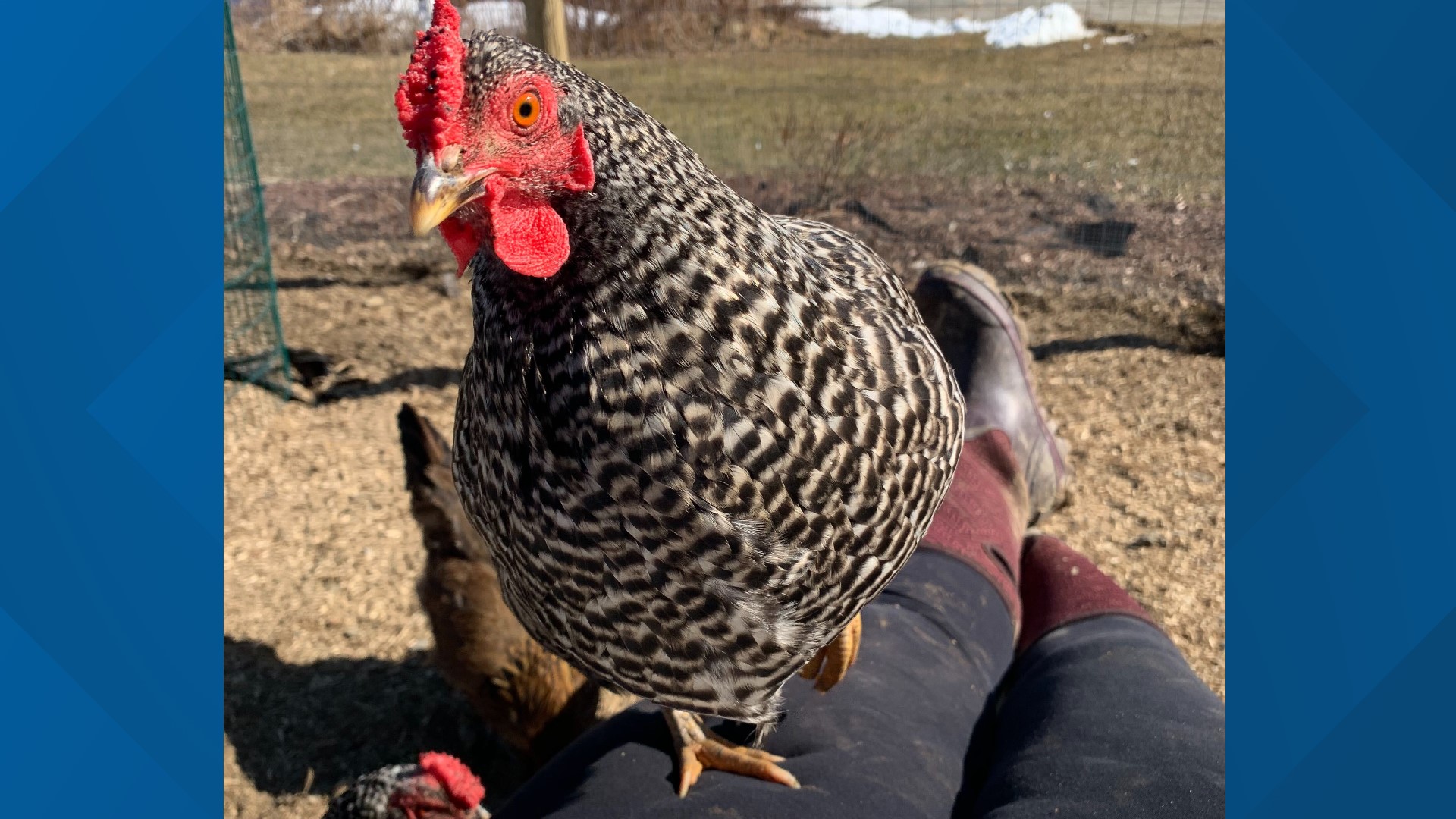 "Which came first ... the chicken or the egg?" is a question that has long been debated. But in a Waldo farmhouse, there was no debate about it: the egg came first. The only question was - which hen had done it!

In September, Kate McCormick left the back door of her 1800's farmhouse open so that her trusty dog Jake could get fresh air and visit his chicken friends. While most dogs love to chase and harass hens, McCormick says Jake has always loved all animals, especially those of a feathery persuasion.

Which was perfect because on April 19th, chicks arrived at the post office for McCormick. Jake took to them like any good mother hen would, watching over them as they brooded in the house, letting them search for bugs in his fur and taking them for rides on his back.

When Kate got home from the fair it was past dark and she was tired. She went up to bed with Jake in tow as he almost always is, she pushed back her throw pillows from her bed and there it was; an egg. Kate says she immediately looked at Jake.

"You didn't do this," she told him knowing full well Jake had never touched an egg or shown any interest in them. Kate got on the phone and called three friends trying to find who had broken into her home to play the egg prank. No one fessed up.

But the culprit had left a clue.

Small piles of chicken pooh on the floor were laid out like a map of where the hen had gone as she explored the house. Kate says she laughed for an hour as she cleaned up the mess. Now the only question was which one?

The next morning Kate sat down with a cup of coffee after letting her hens out to wander. With the back door open again she heard it: the soft taps of chicken talons against the hardwood floor as they hopped up her steps. One of Kate's two Dominique hens clucked from upstairs and when Kate got to her bed there was another fresh egg nestled comfortably between her pillows.

Credit: Kate McCormick
Jake might just believe he is a mother hen. He has been looking after his 19 chickens since they arrived in April one day after hatching.

"I am kind of superstitious," Kate says.

She doesn't name her chickens anymore. (Whenever she has in the past, the hen has died shortly thereafter.) But this particular social bird got the nickname  Best Friend Chicken from Kate's friends' kids. Nicknames are fine but as far as Kate is concerned, she remains nameless.

Kate picks Best Friend Chicken up in her arms and lets her gently peck at her plaid shirt. "She just loves being around people and Jake."

Most days while the rest of the brood stay in the yard searching for grubs or predictably laying their eggs in the hen house, Best Friend Chicken ventures indoors to share Jake's breakfast, help with the laundry, watch television with Kate or nestle in a cupboard.

Credit: Kate McCormick
Best Friend Chicken may be one of the most social and mischievous chickens.

The only downfall to having a chicken who thinks she is a more of a human is the cleanup.

"Yeah, I am cleaning up your poop. Yes, you did that," Kate says to the house-laying hen as she wipes up the floor. For the most part, Kate says Best Friend Chicken doesn't have too many accidents and Jake helps clean up the ones she does have.

Credit: NCM
Most dogs would mind sharing their breakfast but not Jake.

"I draw the line is at having a chicken walk across my counter." While hens may not be able to fly they sure can jump. Kate is currently trying to train Best Friend Chicken to stay off her clean counters.

Best Friend Chicken's story and her friendship with Jake is being shared around the country and Kate has even had calls from a Canadian radio station.

"I know that people are really feeling joy and happiness seeing the story of Jake and the chicken," Kate says with a smile on her face; but most of all it is making for one happy home in Waldo and one happy mother hen.

1 / 10
Kate McCormick
Jake looks over his chickens like they are his puppies.