After decades avoiding the water, amputee invents his way to dive back in

When a Danforth man struggled to swim without his leg, he and his wife spent fourteen years finding a way to get him - and other amputees - back in the water. 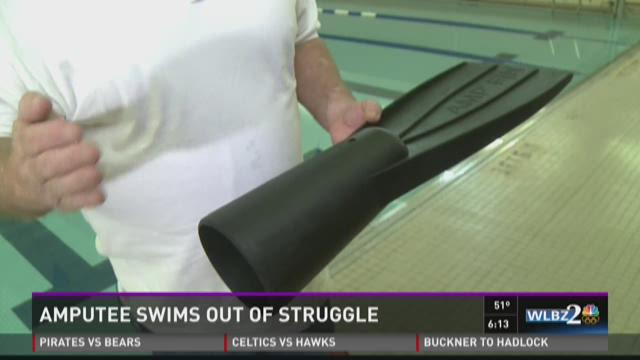 PRESQUE ISLE, Maine (NEWS CENTER) - A Danforth man’s mission to get back in the water has become a project that's capturing attention worldwide.

He and his wife have developed a new prosthetic swim leg that could make life in the water easier for amputees.

“Amputees don't really like the beach. Or the water for that much.” These words rang true for Randy Lord after a steel door crushed his leg thirty years ago. It left him with a horrible decision. “The [doctors] said, ‘below the knee now, or in six months above the knee.’”

Randy’s wife Lori married him after the accident, but knows her husband’s struggle. “That must be a scary feeling. Because he used to be such a good swimmer and now all of a sudden you can't move in the water.”

After nine years not swimming, Lori pressured him back in. She said, “I thought you loved the water. You were a diver, what's going on?”

Randy and Lori shopped for a prosthetic swim leg, but they couldn’t find anything to their satisfaction on the market.

The legs they tested either chaffed painfully or didn't work right.

So, Randy and Lori made it their mission to bring amputees back to the pools and the beaches.

Lori said that the couple “had taken a vow to each other that this was important enough. We said to each other, ‘whatever it takes.’”

After trying and failing for years, the Lords were about to give up. But Randy said that, “in 2005, when the veterans started coming back from Iraq, [they] decided [they] would pick the project back up and try to finish it.”

It took nearly fourteen years of late nights in their Danforth kitchen, but they finally had an answer. It wasn’t a prosthetic swim leg, but a prosthetic FIN.

Lori described the first successful swim as a moment the couple will always remember. “The first day that we actually went down to the lake with the prototype that we had kind of patched together, and he went in the water, he was absolutely amazed. And we were so happy because it worked.”

The AMP FIN was born.

The fin is a Maine made product. Molds are crafted in Kennebunk, then custom fit to each amputee in Presque Isle.

The person who does those fittings is an above-knee amputee who uses the fins himself. Presque Isle prosthetist Cory LaPlante said he sees the fin as “a true reflection of somebody needing or wanting something, and just developing it themselves. Like a lot of people in Maine do. We just kind of make it happen. So I think it is a true reflection of Mainers.”

The Lords' invention is already helping swimmers feel more comfortable. Donna O'Brien from Caribou lost parts of her legs to aggressive tumors when she was just ten years old.

But that didn’t stop O’Brien from getting in the water. “I always swam. Always swam, played basketball, played soccer. That got problematic with the prosthetics and the legs, but…swimming I could always do.” No matter what it took. She would even go so far as to wrap her leg in garbage bags to get in the lake where she grew up.

Her first time swimming with her AMP FIN felt like a major upgrade. “It was incredible,” she said. “By the end of last summer I was doing 100 laps an hour because I could just go back and forth and back and forth.”

The Lords' creation could affect amputees worldwide. Orders already coming in from Denmark, the UK, and Australia.

Lori said that “the one thing about amputees - they'll never tell you this - but they are in pain twenty-four hours a day. And it's a very hard lifestyle. Very hard. So if we can make it a little bit better for them, you know, we've accomplished our goal.”

Randy believes that the fin will “be the thing that tears down the barrier for amputees going in the water.”

Randy and Lori have big plans for AMP FIN. They already have a US Patent, and have applied in several other countries.

One of their long term goals is to open AMP FIN shops across the country, run exclusively by veterans.