With the help of his twin sister, Adam Libby has become a star on TikTok sharing his favorite recipes more than 600,000 followers. 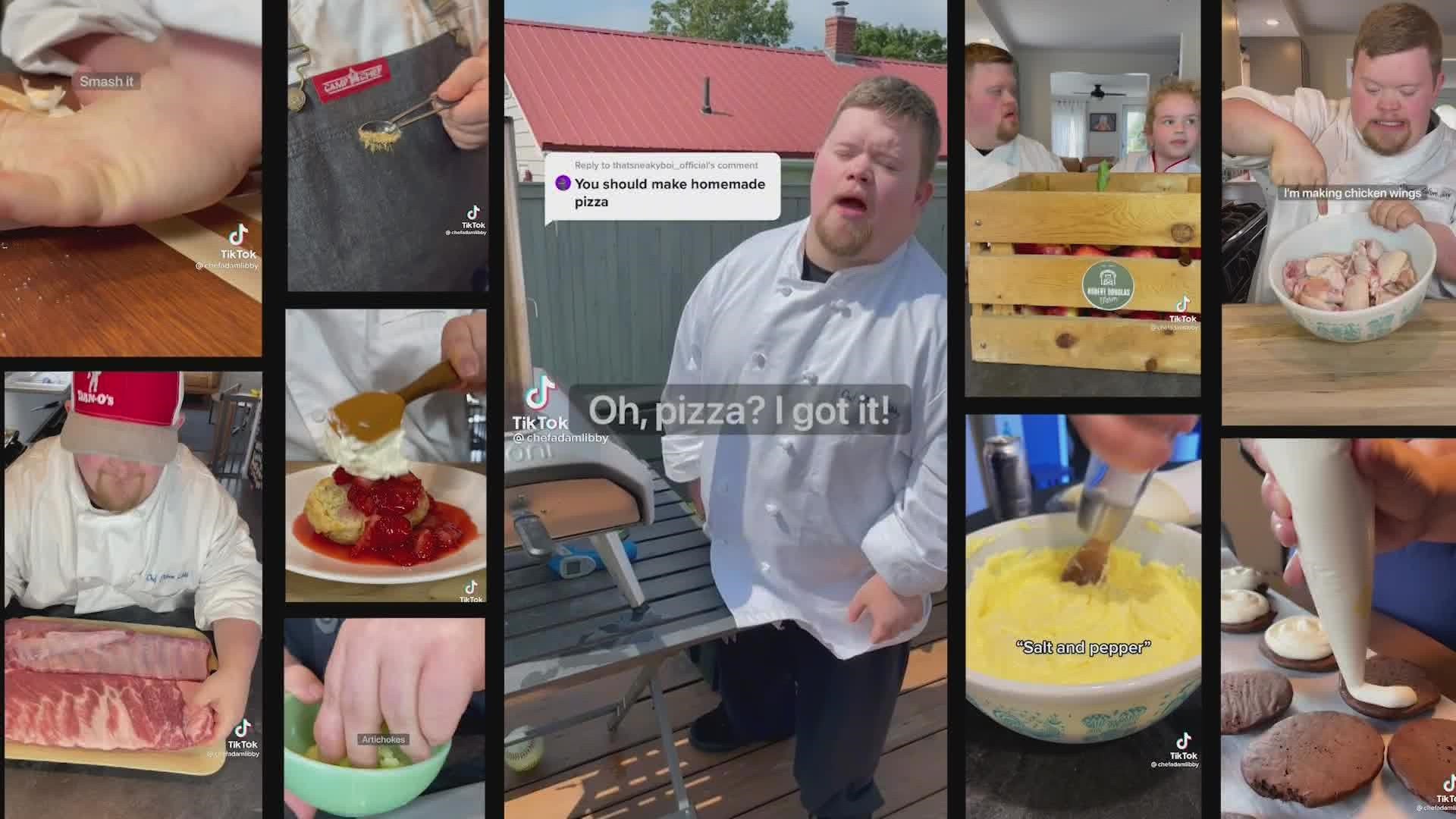 LINCOLN, Maine — The magic of TikTok is that one funny dance or a baby laughing and a video can go viral.

From his kitchen in rural Maine, Adam Libby tapped into that magic, and TikTok is making him a star as he shares his quiet life and passion for food with millions of strangers.

The population in Lincoln is less than 3,000 people, yet Adam, who has lived in the small town his whole life, has 200 times that many viewers following him on the popular video app.

"Hey everybody!" shouts Adam to the phone operated by his sister-in-law Sarah McCormick-Libby as they make a video creating a flaming Hot Cheetos Street Corn Pizza.

"I love it," Adam exclaimed. It takes him over an hour to make a 1-minute video.

He is coached and helped by his twin sister, Emily McCormick-Libby, and her wife. Together they help Adam make two videos a week. Since he started in March 2021, he has amassed a huge following, and some of his videos have millions of views.

"Around town, everyone is like, 'There’s Chef Adam,'" McCormick-Libby said.

The TikTok channel is changing Adam's life. McCormick-Libby said she doesn't think her brother knew the words Down syndrome until his exposure online. He was born with it.

"He is more confident. He's just happier. I think he was depressed," McCormick-Libby said.

Growing up in a small Maine town, Adam didn't have a lot of resources, and his videos have opened up his opportunities.

"Other families that have someone with Down syndrome have reached out and said how inspiring Adam is. It gives them hope for their children. It helps their child want to help in the kitchen more. Stuff like that is special," McCormick said.

In October, Adam was featured in a video for the National Down Syndrome Society, and he's been connecting with other people with disabilities, showing them his confidence and independence.

Language is a barrier for Adam, but his TikTok videos are even helping him with that. He is not only amazing fans but his family as well.

"I have never seen him be so independent," Sarah McCormick-Libby said. "I never thought he'd be able to cook a pizza by himself.  A lot of people with disabilities, we do things for them because it's easier for us, but he is showing everybody that he is capable of doing these things."

Adam is receiving mail and gifts from strangers who feel like friends. And for the first time in his life, Adam has money of his own, earned from the TikTok account that is giving him a sense of independence.

Adam loves his twin sister to read to him some of the thousands of comments on his videos that are giving a healthy boost to his ego. And while his sister is certain he cannot comprehend what 600,000 followers mean, she is seeing a change in her brother that is bringing a tear to her eyes.

"I have seen him through so many different phases in his life, and watching him become this man, and he's proud of himself, that makes me very proud," she said.

This holiday season, the gifts Adam's sister is most thankful for are the lessons her twin brother is still teaching her.