The tree cutting for the first 10 miles of the controversial corridor is nearly done, according to company leaders 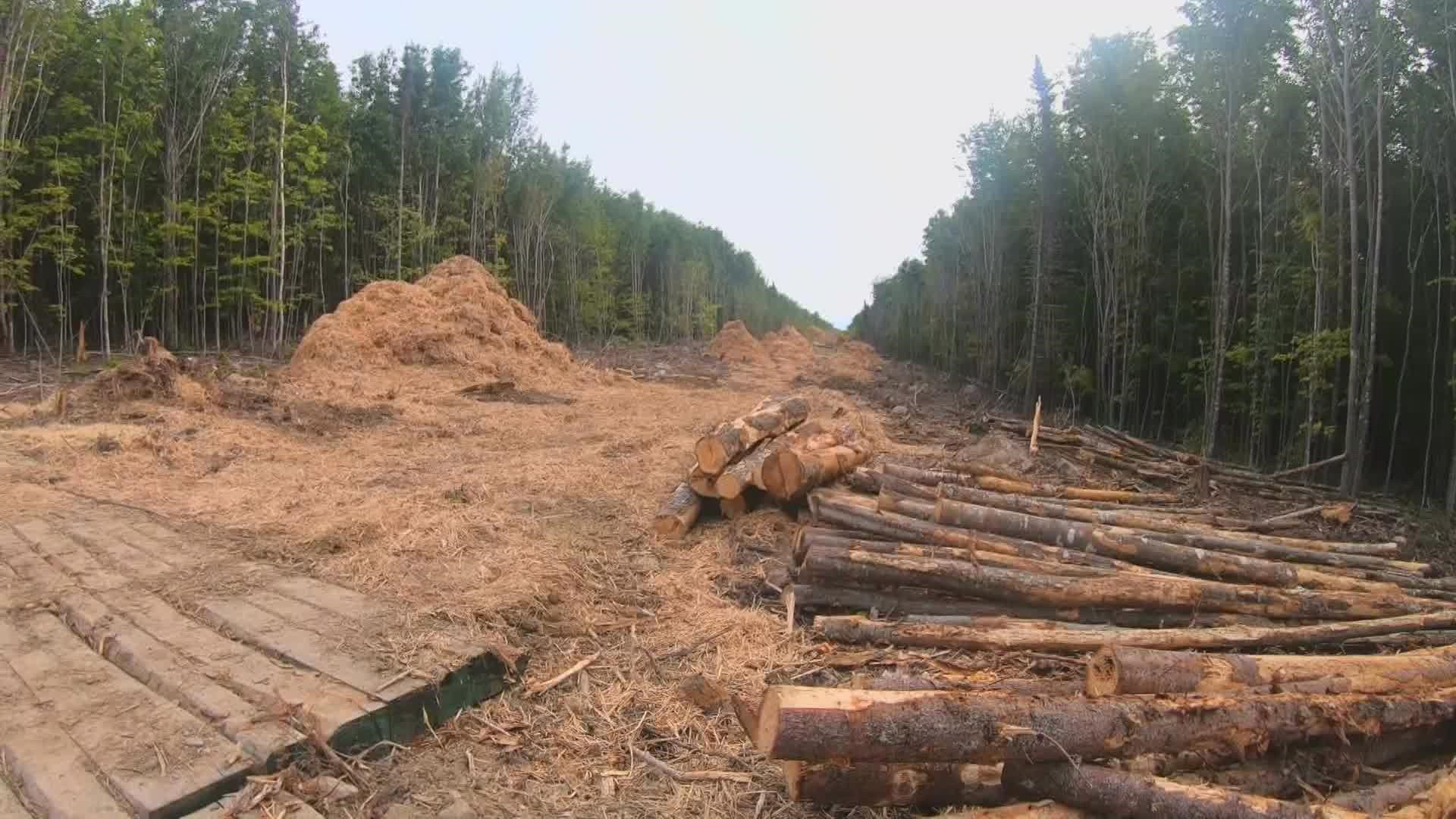 WEST FORKS, Maine — Near Johnson Mountain in northern Somerset County, the fresh clear cut stretches away in two directions, looking like the start of a new highway through the woods.

In a sense it is, but the New England Clean Energy Connect won’t be paved and will carry speeding electrons of hydroelectric power, instead of motor vehicles.

The tree cutting for the first 10 miles of the controversial corridor is basically done, according to company leaders, with about 43 miles left to go to finish the new section. Tree cutting was shut down for June and July to protect an endangered bat.

Woods crews hauled out most of the trees that were cut before that shutdown and ground up smaller wood into huge piles that resemble shavings, which will eventually be spread on the ground of the corridor route.

NECEC President Thorn Dickinson said that while the fresh clear-cut is a major change to the woods, the area has been cut before. And he says the actual forest impact of the NECEC will be relatively small.

“We are impacting just over 1,000 acres on the project. Every year Maine cuts about 400,000 acres of its woods for forest operations,” Dickson said.

He also argued that the benefits of the new hydropower will far outweigh any environmental impacts from building the actual line.

“The carbon reduction this project will deliver is equivalent to a new forest the size of Vermont.”

Project opponents claim there will be no overall decrease in carbon for the region, contending the hydropower that will be fed from Hydro Quebec is not a new generation, but being shifted from other users and replaced by fossil fuel power. HQ says that’s false, and a study done for the Maine PUC two years ago also stated there will be an overall carbon decrease.

But the project has been the object of a different environmental complaint, leveled by four Legislators who oppose the corridor. They say the timber cutting for the initial 10-mile section has shown a major flaw in the Maine DEP’s requirements in the project permit.

The DEP allows the actual clear-cut for the polies and wires to be 54 feet wide, and trees on either side are supposed to be “tapered”. Under the conditions of the permit, the first 16 feet on either side of the corridor are supposed to have trees less than 15 feet tall, with trees allowed to be taller in buffer strips farther from the line.

Sen. Russell Black (R-Wilton) is one of four lawmakers who complained to the DEP that the clear cut area is actually much wider than it's supposed to be because the trees in that first tapering strip have also been cleared.

“If you look at the stumps and look at the trees, they [NECEC crews] are doing what is asked for on paper and on the permit, but it doesn’t meet what’s desired on the ground,” Black said.

The lawmakers asked the DEP to block further cutting until the permit could be changed.

This week, the agency released a letter to the Legislators from DEP Commissioner Melanie Loyzim, saying the DEP has investigated and found no basis for the complaint.

“The cutting observed within both the first and second taper zones is consistent with the NECEC Order,” Loyzim states in the letter.

Adam Desrosiers, who has been serving as engineering and project manager for the NECEC, showed some of the areas in question.

The section of the corridor near Johnson Mountain runs through a former clearcut, where the trees have grown back to be all the same age and height. Desrosiera pointed out the trees are significantly taller than 15 feet, the limit in that FIRST “TAPERING CUT” STRIP. As a result, they were all cut to the ground—making the original 54-foot wide swath for the corridor much wider.

“So what you see here is primarily everything was over the 15 feet tall so it was cut and as you get beyond the 16 feet the allowable height gets taller and taller,” he said.

Asked about the next strip, with a maximum height of 25 feet, he said some of the trees in that strip are still too tall.

“They will be taken down at the base, processed, and then we will be allowing it all to grow back up to 15 feet.”

The actual “wire zone”—the 54-foot power line area—will also be allowed to grow back naturally as soon as poles and wires are placed. That area will be maintained as shrub and undergrowth, he said, while trees will be allowed to grow in the tapering areas, but will be maintained at required heights once they grow that tall. All of that maintenance work, says Desrosiers, will be done by crews working on the ground.

“We’ve committed to not use herbicides.”

While cutting has resumed, the corridor still faces other obstacles. Those include a legal challenge of the NECEC permit to cross state-owned public land without having received permission from the Legislature. That permit was issued under the LePage Administration, then revised and reissued under the Mills Administration. Project opponents and some lawmakers say it violates the requirement for two-thirds approval from the Legislature if the project substantially alters the use of the land. A ruling is expected soon from the judge in the case.

The other obstacle is the referendum vote coming in November, which opponents hope will block the project.

Thorn Dickinson says the NDECEC isn’t stopping because of those issues, and for now, the work goes on. 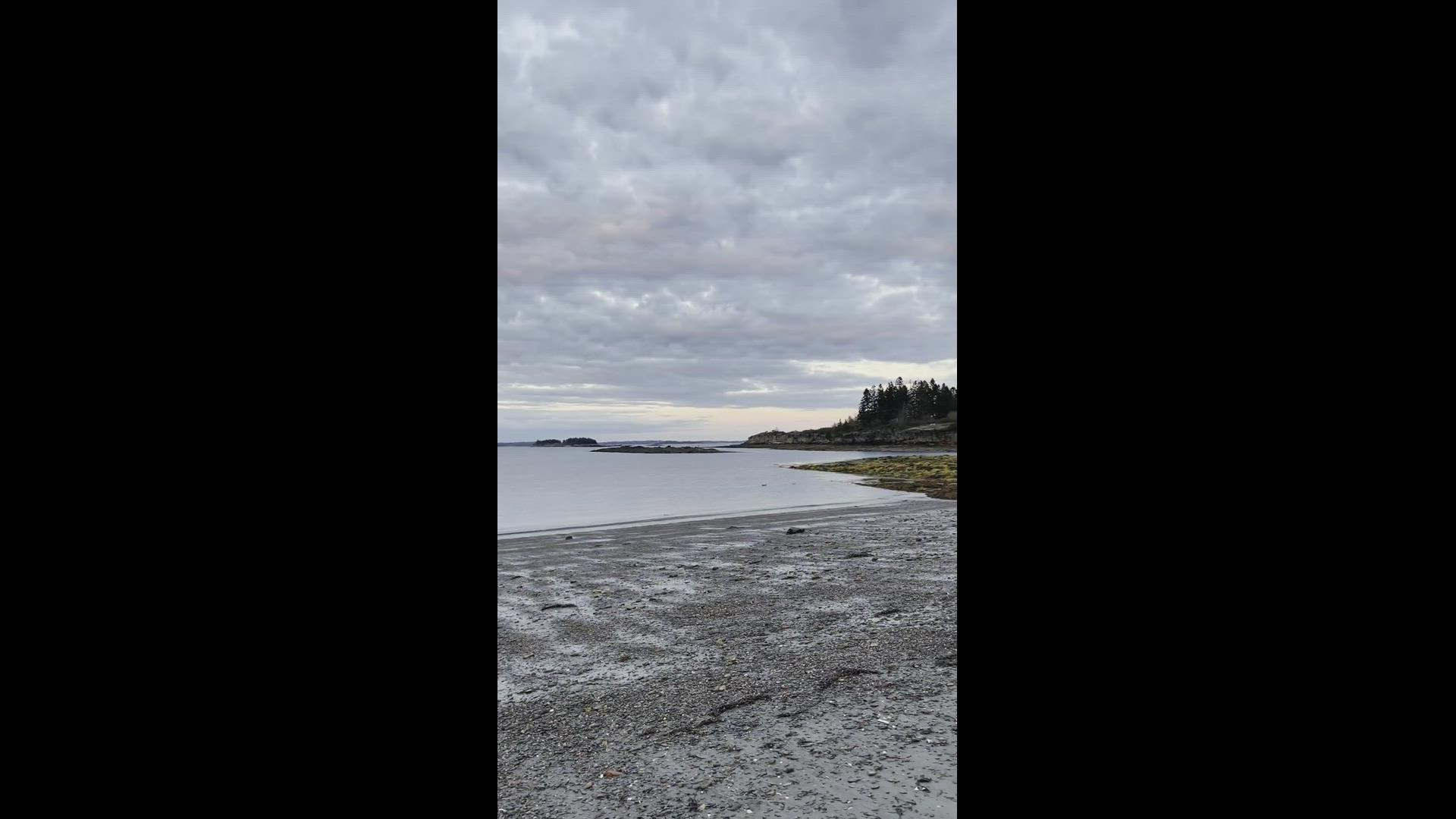 An evening stroll on Cliff