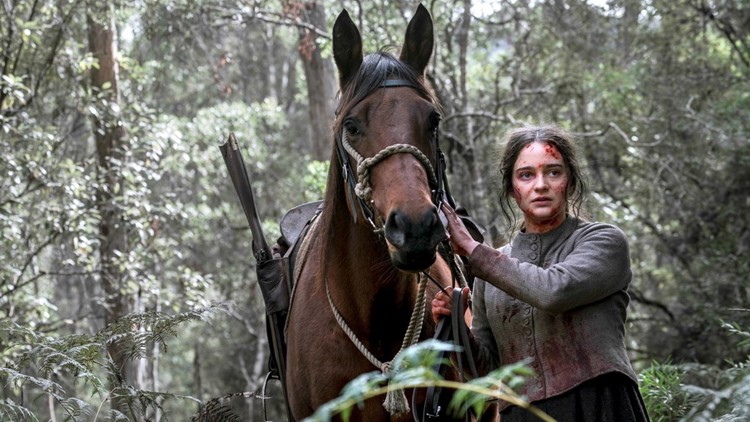 Writer/director Jennifer Kent got your attention with 2018's shocking The Babadook; she will keep it with this month's The Nightingale. This is a stunningly brutal and beautiful tale that once again casts an oppressed young female in the center of the story, and the writer/director doesn't hold back or hide the grim for your well-being (or stomach).

Clare (the fierce Aisling Franciosi) is an Irish convict paying off her debts to the volatile British Army. Living with her equally imprisoned husband and infant child, Clare just wants her freedom, but finds it a fleeting dream when dealing with Lieutenant Hawkins (Sam Claflin) and his second in command, Ruse (Damon Herriman). When Clare suffers a terrible family tragedy and is left for dead, she seeks revenge.

Judging from afar, you'd say Hawkins' good looks and easy smile would appeal, but up close, the realization of his evil would make you throw up. Here's a guy who kills, rapes and destroys as easily as one would stretch out in front of the morning sun. He's sadism personified, and his ways have spread to his guards.

I love the casting of Claflin here, known to most for his role in The Hunger Games. He's got the misdirecting looks and uses his accent like a blade to slice through whatever stands in his way as Hawkins. It's not just Clare who has felt the wrath of these soldiers; the Aboriginal locals are being slaughtered endlessly, their land falling to their killers in the wake of enough blood to fill a large cabin.

Clare teams up with one of the locals, a tracker named Billy (the wonderful Baykali Ganambarr), who has lost a few dear pieces of his own past. Their mutual pain and how they go about healing it is what makes Kent's story breathe into something more than just an ordinary hunt and kill thriller tale.

RELATED: Review | 'David Crosby: Remember My Name' is a heartfelt and brutally honest depiction of the musician's life

While many filmmakers will just deliver the action and kills, Kent wants to slow things down and let the film encompass the viewer in an overwhelming sense of dread before showing them the light of vengeance. In a matter of words, that's what grief really is and how it exists.

When Clare has the chance to exact justice on one of her perpetrators, things don't go as planned. Our protagonists take several beatings before they find their resolve. These two don't simply flip a switch and go from regular survivors to cold-blooded killers. It doesn't work like that in real life, and Kent strives for that realism amidst a rugged brutality.

Trust me, she knows how to do action and how to frame it so the viewer just soaks it in. You'll need to look away during several moments, and at a couple junctures, you may think about walking out. There's one death onscreen that I won't go into, but will confess that a large gasp awaits you when it occurs.

Kent doesn't care about your fragile hearts. Like Kenneth Lonergan or Alejandro G. Inarritu, she cares more about her characters than the audience's feelings. That's a strength in this movie.

The Tasmanian jungle, where much of the film is shot, is gorgeously rendered by the DOP, Radek Ludczuk. He paints a lot of earl grey into the faces and skies, which mixes nicely with the bloodshed being relentlessly poured out as the running time extends its arms.

RELATED: Review | Why Amazon's 'The Boys' is a must-watch television show

The 136 minutes can be a chore in most films, but the slow burn here favored the story and film-making method. You'll appreciate the end, which may count among the best images of any film in 2019, when it happens, due to the patience Kent showed in getting there.

Franciosi is known to most entertainment viewers as Lyanna Stark on HBO's popular series, Game of Thrones, but this was the first time I truly "saw" her in something. There are a hundred different -- and easier -- ways to play Clare, but thankfully, the actress built this character from the inside out instead of just playing a role. Called The Nightingale because of her lusciously innocent beauty and singing ability, Franciosi has a quiet ruthlessness about life that is bred from harsh times. They only continue, and she is up to the task of playing the evolving role.

The aforementioned Claflin steals the scenes he's in and Herriman (Charles Manson in this summer's Once Upon a Time ... in Hollywood) knows how to play fractured filth, but Ganambarr is the real find here. Judging by the enduring innocence and nurturing rage he brings to the role, you wouldn't know this is his first film. He's superb.

The Nightingale is an acquired taste, but then again, the best art house films usually are. You have to go to a dark place in order to properly tell a dark tale.

Jennifer Kent did that with The Nightingale, a brutal yet beautiful film that moves to its own beat and on his own terms.

If you want an original revenge tale, look no further.