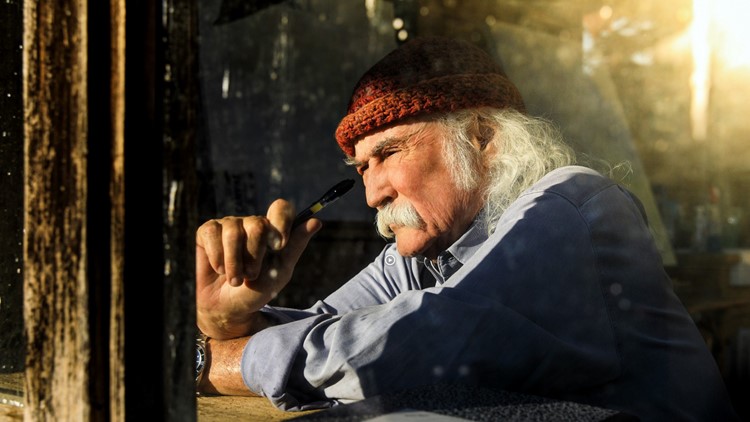 Review | 'David Crosby: Remember My Name' is a heartfelt and brutally honest depiction of the musician's life

ST. LOUIS — "What drugs do the body is like what a fire does to a building."

David Crosby, two-time Rock and Roll Hall of Fame inductee and a relentless survivor, could be talking about his entire life when he tells Cameron Crowe about the addictive powers of drugs and the toll they take on the human body.

After all, he has played a part in four different bands in his life. First, The Byrds, where he broke onto the music scene in the late 1960s. Crosby, Stills, and Nash is the one he is most known for. The trio added Neil Young later on, and these days, Crosby is traveling around on a solo act, recording albums with young musicians.

He's unstoppable ... unless you take away music from him. If there is one common thread in A.J. Eaton's documentary, David Crosby: Remember My Name, which is produced and powered by Cameron Crowe, it's that music saved Crosby's life a number of times. Probably too many times to count.

The man currently lives with eight stents in his heart, carrying around dozens of vivid memories of his past, each one stained with a heartfelt touch of bittersweet indifference.

Before I walked into the screening, Crosby was just another name in music's history to me that was clouded by songs and nothing more. I didn't know about his struggles, regrets, high points, low moments, or pretty much any detail. Documentaries, especially well-made ones, help fill that void with delicious content. Answers shrouded in infinite detail so the mind can wander on hours after the lights in the theater come on.

RELATED: Review | Why Amazon's 'The Boys' is a must-watch television show

I left the screening blown away by the intimacy, honesty, and overall scope that Eaton and Crowe's documentary provided this old school music lover. Crosby hasn't been this candid about his trials and tribulations with anyone else before, so kudos to the esteemed Crowe (few filmmakers know the music world better) for pulling it out of him.

Everything finds its way into this documentary. Crosby's isolated childhood to his first brush with music; when he formed The Byrds, leaning into drug usage; finding his footing with Graham Nash and Steven Stills; falling in love, messing it all up, and finding it again. Crosby spares nothing and gives an intricate account of his life while sitting on a couch, driving around to old haunts, or performing on tour at the age of 77. We follow him all over the place throughout the 99-minute journey into his heart of darkness.

Maybe it's a cry for forgiveness or acceptance. I don't think so. For my money, Crosby has nothing to worry about when it comes to what people think, young or old. He did what he did, and is telling the viewer why it happened. He takes several shots at himself, at one time saying about his late girlfriend Christine Hinton, "I'm sorry... for not loving you more."

The reference to drugs and burning buildings is how Crosby described the addiction of heroin, which nearly wrecked his career and ended his life. This isn't a documentary that pulls down the curtain when things get too messy or ugly. If Eaton and Crowe do one thing here, they bring in more light to Crosby's life, bearing all the demons and internal enemies he still battles today.

There's a lot of goodness packed into the 99 minutes you'll get this weekend. Right now, this sits among the best documentaries that I have seen this year, right near the top of the list. When it comes to music docs, it sits right up there near Searching for Sugar Man.

It doesn't matter if you are 25, 35 or 65, you'll get a true kick out of Crosby's story. Here's someone that you'd love to have a drink with at the very least, if not befriend. Like him or not, he has an incredible story to tell and this documentary delivers that tale in full-blown, nonstop fashion.

I loved the moments where Crowe would ask Crosby something and the musician would just dish an answer right back without hesitation. Other times, he'd struggle with the form of the retort, but it was more about being as honest as possible.

The best part of David Crosby: Remember My Name is the honesty. It doesn't just remember his name, but who he was as a musician and person.

RELATED: Review | 'The Kitchen' is one of the worst movies of the year