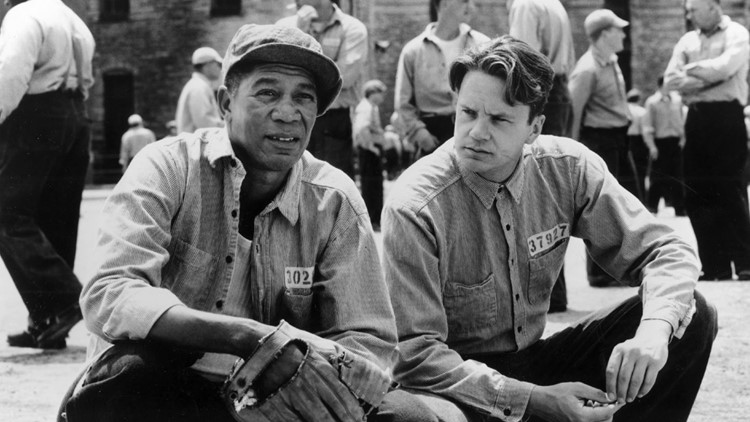 Photo by: Courtesy Castle Rock Entertainment/Library of Congress via AP
In this photo provided by Courtesy Castle Rock Entertainment via the Library of Congress, a scene from the movie Shawshank Redemption, featuring inmates Red (Morgan Freeman), left, and Andy (Tim Robbins) share a quiet moment in the prison yard at Shawshank.

Twenty-five years ago this September, arguably the greatest film adaptation of Maine author Stephen King's career was released in theaters.

Based on King's 1982 novella "Rita Hayworth and Shawshank Redemption," "The Shawshank Redemption" follows the story of a Portland, Maine, banker named Andy Dufresne, who's convicted in a double-murder and ordered to serve back-to-back life sentences at Shawshank State Penitentiary.

Despite its fictionality, that prison, consistent with most of King's work, was modeled after a real-life facility in Thomaston: the former Maine State Prison, demolished in April 2002 after nearly two centuries and relocated to Warren.

Ohio State Reformatory in Mansfield, Ohio, was the actual prison that served as "Shawshank." Since the film's release, the architectural masterpiece, which closed in 1990, has been turned into a museum and conducts regular tours.

Crews begin the long-awaited demolition of Maine State Prison, a landmark for tourists and an inspiration for Stephen King, Tuesday, April 2, 2002, in Thomaston, Maine. The Thomaston prison was the model for the Stephen King novella that was made into the 1994 movie, "The Shawshank Redemption," although the film was made elsewhere.
AP Photo/Annie Burbank

Tim Robbins and Morgan Freeman's stellar acting performances, Thomas Newman's gripping score and Frank Darabont's magnificent screenplay all came together in 1994 to create the classic – but initially, it wasn't much of a success.

A dismal, $727,000 opening weekend at the box office didn't help. For a film that cost $25 million to produce, it faced an incredible uphill battle to break even. What's more, its Sept. 23 release was preceded by three mega blockbusters: "Forrest Gump" and "True Lies" in July, and "The Lion King" in June.

For the 15 weeks it was in theaters – Sept. 23 to April 6, sans a winter hiatus – the highest "Shawshank" ever placed at the box office was eighth in its third week behind duds "Only You," "Jason's Lyric" and "Quiz Show."

Finally, after six months, it surpassed production costs in March 1995.

Simultaneously, the film tied "Bullets over Broadway" and "Pulp Fiction" for the second-most Oscar nominations headed into the 67th Academy Awards, with seven. But it won no awards, losing Best Picture, Best Actor, Best Adapted Screenplay and Best Film Editing to "Forrest Gump," Best Cinematography to "Legends of the Fall," Best Sound to "Speed" and Best Score to "The Lion King."

Fast-forward 25 years, and "Shawshank" is considered one of the most popular films ever made, a feat the Washington Post attributes to its coming of age in the Internet Era and rich themes of hope, faith and perseverance of good.

The movie's 9.3 user rating on IMDb is the database's highest score of all-time, escaping big high-scorers "The Godfather," "The Godfather: Part II," "The Dark Knight," "12 Angry Men," "Schindler's List," "The Lord of the Rings: The Return of the King," "Pulp Fiction," "The Good, the Bad and the Ugly" and "Fight Club."

Castle Rock Entertainment, a Warner Bros. subsidiary whose co-founder Rob Reiner named it after King's fictional Maine town, has produced six other King adaptions: "Misery," "Needful Things," "Dolores Claiborne" and "The Green Mile" in the 1990s, and "Hearts in Atlantis" and "Dreamcatcher" in the early 2000s.

Some cast members reunited in mid-August to celebrate the anniversary, the Associated Press reported, returning to where most of the film was shot in Mansfield, Ohio. The city's Renaissance Theatre hosted the movie's premiere.